When American Conservatory Theater first announced plans to renovate the Strand Theatre on Market Street, its Artistic Director, Carey Perloff, was bubbling over with ideas about what a second performance space could do for the company. With an eye to having more opportunities to commission new works, Perloff hoped that the Strand's location (smack in the middle of the mid-Market Street renewal effort) would be able to attract a new audience of techies who might be interested in seeing what a new generation of playwrights was producing.

Community outreach was also mentioned as a key ingredient in the Strand's formula for success. Perloff hoped this would include local high school students writing about their experiences as well as ACT attempting to encourage and help develop writers from some of the Bay area's minority and ethnic communities.

Over the years, whenever I brought a younger friend to the War Memorial Opera House for the first time in his life, he would comment that "This audience is so old and white it's frightening!" A sad, but true observation for, despite all the propaganda used to sell the arts to the masses, opera has largely remained a conservative white man's art form. As a rule, productions of Turandot and Madama Butterfly don't flood an opera house with Puccini-crazed Asian Americans.

During the 1980s, Michigan Opera Theatre attempted to make inroads among Detroit's ethnic groups by staging a series of minority-oriented operas -- Armen Tigranian's 1912 opera, Anoush; Stanislaw Moniuszko's 1865 opera, Straszny Dwor (The Haunted Manor); and Scott Joplin's second opera, Treemonisha (which was composed in 1910 but did not receive its official premiere in 1972) -- with help from the local Armenian, Polish, and African American communities.

Although one wonders whether audiences who bought tickets for these events were sufficiently motivated to attend subsequent performances of the standard repertoire which lacked a similar ethnic appeal (most of M.O.T.'s ticket buyers were prodded into action by a sense of ethnic pride or some less-than-subtle pressure from their church congregations), at least they were introduced to a musical art form that was accessible on some cultural level.

Unfortunately, arts marketers who embraced the "reefer madness" philosophy of subscription sales often deluded themselves with the assumption that one experience would have the same dizzying, and life-long effect on a new attendee as a toke of marijuana does on an innocent teenager. As a result, I'm curious to see how well ACT's double bill (Monstress) based on two short stories by Lysley Tenorio will succeed in building any kind of lasting outreach to the local Filipino American community. Will Pinoys come back for more theatre? Or will this be a one-off kind of event.

The two short stories which were chosen attracted two of the Bay area's more prolific talents: Philip Kan Gotanda and Sean San José. As actor/director/playwright San José sees things, the evening's common theme of "a love not meant to be" makes quite a bit of sense to him. For Sean, Lysley's collection of short stories about the life of Filipino immigrants raises some important questions:

What quickly becomes obvious is that these two plays are (a) labors of love, and (b) could each sustain about 15-20 minutes of cuts. Working on a handsome unit set designed by Nina Ball with costumes by Lydia Tanji and sound design by Jake Rodriguez, the two plays (which harken back to earlier moments in the 20th century) are wildly different, yet touchingly sentimental

The evening begins with Philip Kan Gotanda's new play, Remember the I-Hotel, whose opening scene takes place in San Francisco's Manilatown on August 4, 1977. To the sound of angry protesters who are trying to save the International Hotel and police who are trying to get rid of the protesters, the audience witnesses two old Filipino men struggling to get themselves together so that they can leave the hotel. Suddenly, there is a flashback to earlier times, as a beautiful Filipino dance hall singer (Melody Butiu) lends crucial ambiance to the segments set in the 1930s. 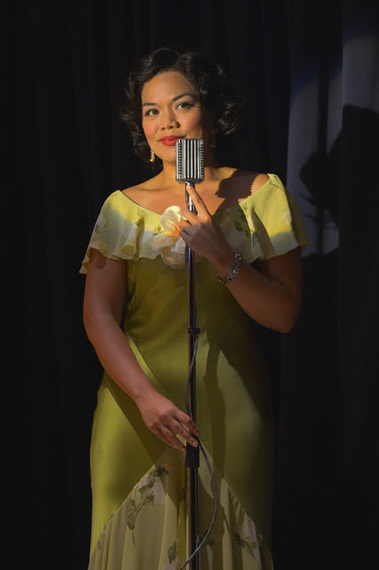 Melody Butiu is the singer in Remember The I-Hotel
(Photo by: Kevin Berne)

The plot revolves around the strange relationship between two Filipino immigrants: 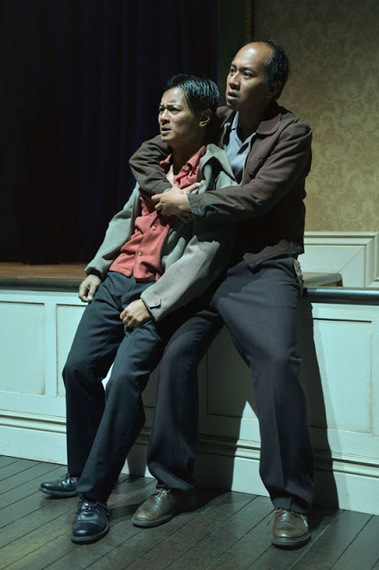 Ogie Zulueta and Jomar Tagatac in a scene from
Remember the I-Hotel (Photo by: Kevin Berne)

Starting off with no money and no worldly possessions, Fortunado was flattered when Vicente asked his name (something none of his co-workers in the asparagus fields had ever done). After Vicente insists on shortening the country boy's name to "Nado," their friendship continues to develop.

After a night of drinking, they return to Vicente's room at the International Hotel where, in a rare moment of intimacy, Nado kisses Vicente goodnight. Although Vicente may think nothing of returning Nado's kiss (and can't even remember it the following morning), that kiss means the world to Nado, a closeted gay man who is just starting to experience life in the big city. As Gotanda notes:

"I grew up in Stockton in the '50s and '60s with many Filipino Americans as neighbors. The older Filipino American men, the manongs, held a kind of special place in my imagination because they'd always be walking around with those stinky cigars they smoked and they all looked really cool. They were always so well dressed. All of that provided a world I wanted to go back and explore." 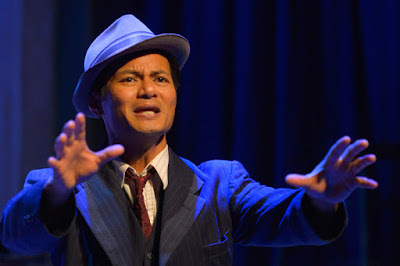 Ogie Zulueta is Vicente in Remember The I-Hotel
(Photo by: Kevin Berne)

Much to Nado's disappointment, Vicente soon begins flirting with one of the white maids at the Parkdale Hotel, Althea (Kelsey Venter). While Vicente and Althea seem fearless in their newfound love, the more conservative Nado is keenly aware of the dangers involved in a Filipino man being seen in public with a white woman. 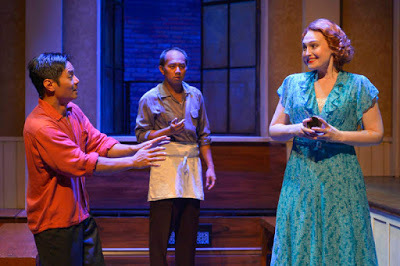 One night, when Nado and Vicente are alone, Nado reminds his friend of their kiss. But Vicente has grown accustomed to having sex with Althea in one of the hotel's suites (as a maid, she has the keys to every room). Disappointed and disgusted, Nado goes for a walk on the Embarcadero. Impulsively, he calls the hotel to report that a mixed-race couple is using one of the suites for sex. Later, while Nado hooks up with an anonymous man, Vicente is viciously beaten by the hotel's security guard as Althea stands helplessly by. 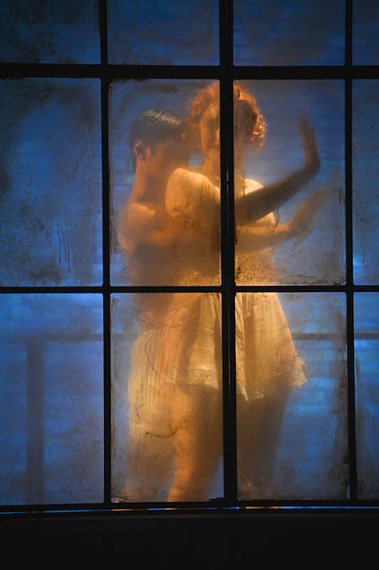 Vicente (Ogie Zulueta) and Althea (Kelsey Venter) share
a moment of forbidden interracial love in a scene from
Remember The I-Hotel (Photo by: Kevin Berne)

In discussing his take on Nado, Tenorio explains that:

"He really was just a character who came to me. But when I hit the final drafts, that's when I started bringing in some of those questions from the real world. Certainly, I've thought about 'Is this character going to be demonized because he is a gay character who is, in essence, committing an act of betrayal?' But it felt true to the story. While I could understand those concerns, maybe that's the luxury of writing now as opposed to writing this 20 years ago. Today there is more appreciation of gay life, gay culture, gay and characters. I don't want to say that I have a little more 'freedom,' but I can (a little more willfully) have Nado be the agent of betrayal in that story without worrying about 'Oh great, the one gay character is also the guy who screws the other guy over in the end.' The question becomes: Is this true to Nado's character? Is this true to the story? And I think it is. I don't think he sees it as an act of betrayal in the moment, but he certainly realizes it as an old man."

As the play ends, the two men are being evicted from the International Hotel. Although by now, he can barely communicate, Vicente (who insisted on 'leading' back in the 1930s when he was trying to teach Nado how to dance) quietly gestures to Nado, indicating that he's ready to follow.

Remember the I-Hotel, which has been poignantly directed by Carey Perloff, gives ACT's audience a chance to appreciate the craft of two of the Bay area's finest character actors: Ogie Zulueta and Jomar Tagatac. Robert Hand's lighting design adds a special sense of period to the play.

Sean San José's adaptation of Monstress is a much more rambunctious affair in which he plays a Filipino filmmaker named Checkers Rosario (who has been pumping out Grade-B horror features like The Squid Children of Cebu, Bat-Winged Pygmy Queen, Werewolf Girl, and Coconut-Headed Bride of Coconut-Headed Dracula for Manila's CocoLoco Pictures). 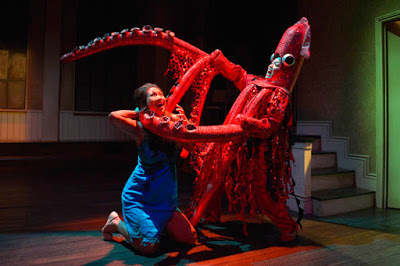 Melissa Locsin portrays the victim of the evil Squid Woman
in a scene from Monstress (Photo by: Kevin Berne)

The action begins in the 1970s, just before Checkers gets dropped by an executive at CocoLoco Pictures. His girlfriend, Reva Gogo (Melody Butiu), who has also been his leading lady, is more than willing to stop making pictures so that she and Checkers can settle down and raise a family. Checkers, however, is no quitter. When an American producer named Gaz Gazman (Nick Gabriel) tracks him down and expresses interest in using some of the footage Checkers has shot in Manila for his American pictures, Checkers is easily swayed by the possibilities. He's also impressed that Gaz identifies his mixture of low-budget Filipino and American horror films as a new genre entitled "Chop-Suey Cinema."

It doesn't take much prodding for the Filipino filmmaker to accept Gazman's offer of a trip to California for himself and his girlfriend. Gaz soon explains that they will actually be landing in San Jose (which is nowhere near Hollywood). Why? Because Gaz lives in San Mateo and films his movies on the styrofoam sets he has built in the basement of his mother's house in Colma. 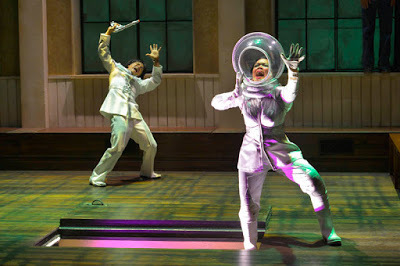 In a scene from Monstress, Gaz Gazman (Nick Gabriel)
films a scene with Reva Gogo (Melody Butiu) about a space
odyssey in which his spaceship is actually a Coke bottle
(Photo by: Kevin Berne)

There is much to admire in the performances by Sean San José as a narcissistic Filipino low-budget filmmaker; Nick Gabriel as his American counterpart, Gaz Gazman; and Melody Butiu as the long-suffering Reva Gogo. However, the real strength of Monstress lies in the creation of a Greek-style Pinoy chorus consisting of two very swishy Filipino cinephiles -- Mata (Jomar Tagatac) and Dala (Olgie Zulueta) -- and their movie-loving fag hag, Tala (Rinabeth Apostol). It's a brilliant twist on an ancient narrative device that works beautifully under the circumstances. 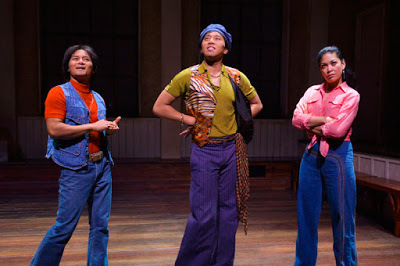