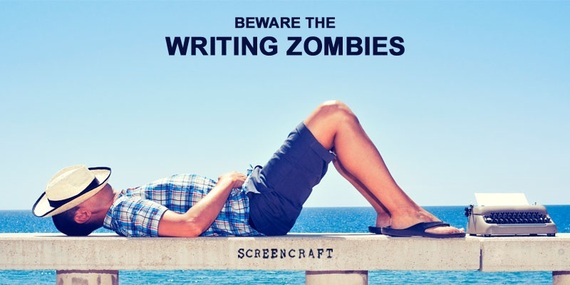 Beware: The world is full of writer zombies seeking to destroy your chances of success.

Real zombies -- if movies and TV shows are to be believed -- are easy to spot. They don't walk, they lurch. They hiss. They have terrible skin.

Writer zombies, on the other hand, don't possess such noticeable characteristics and are thus able to blend in -- that's part of what makes them so perilous. It's entirely likely you may be friends with one and not know it. Or there's one in your writing group or class -- for reasons I'll explain later, writer zombies love taking classes. In fact, you might be one yourself.

Writer zombies are folks who see themselves as writers even though they don't actually write. At least not on any kind of regular basis. Which means they aren't really writers because, simply put, writers are people who write. But writer zombies refuse to give up and accept failure, leaving them in a state of limbo. They aren't alive (they don't write) but they also aren't dead (they don't quit).

Most writer zombies don't realize they are the undead, because they do just enough to convince themselves (and others) that they are actual writers. They talk a lot about writing -- boy, are writer zombies great talkers -- going on for hours about the screenplay or pilot they're supposedly writing or will write once they have the time. They also read writing books and blogs and take seminars because that makes them feel like they are in the game. And they take classes, especially those that impose short-term deadlines, because that gets them writing, which makes them feel alive. But once the class is over, they almost always go back to their zombie ways.

How do people become writer zombies?

Many have been tragically infected with a virulent strain of the victimus virus, rendering them incapable of taking responsibility for their situation. Instead of figuring out the root causes of their non-writing and taking the necessary steps to remedy it, they hide behind an endless parade of excuses.

Their schedule is too busy to afford any real writing time right now. They can't figure out their story. They need to do more research. There's no point in writing a script right now because the industry sucks, and the spec market is dead. They are too old to break into the business. They don't live in LA. Only big concept scripts are selling, and they write smaller quirky character pieces. Only quirky character scripts are selling, and they write big concept stuff.

And part of what makes writer zombies so treacherous is that they desperately want to infect you with this mindset.

Because they don't want you writing. Seeing you write threatens the validity of their excuses. Much better for you to join their zombie support group by agreeing how pointless it is to keep putting in all the hard work when it's never going to amount to a career. So they constantly share statistics, anecdotes and commentary designed to chip away at your confidence, encouraging your doubts and insecurities. And it's hard enough to find the courage to battle the blank page day after day without writer zombies trying to claw you into the excuse abyss with them.

But the real reason writer zombies are so damn dangerous is that it's so easy to become one of them -- because it means you no longer have to suffer.

The industry is a terrible, cold place run by people who love to tear writers apart. Rejection is the norm, which means writing is the act of falling madly, deeply in love with your characters and story, even knowing you'll probably get your heart broken for it. And when that happens, writers pick themselves up and fall in love anew, even though it often leads to the same fate.

The seductive appeal of writer zombies is that they never get their hearts broken.

That's the upside of never really writing anything.

The downside is that you are never really fully alive.