As Beyoncé turns 33 on Thursday, Sept. 4, the pop singer, actress, mother and philanthropist is certainly now the undisputed queen of all. When Beyoncé was just a young kid, she used to charge houseguests $5 to watch her perform. Despite suffering an initial stage shyness, which led to the creation of her Sasha Fierce character, Beyoncé eventually confirmed what we all suspected, saying, "I felt at home on that stage, more so than anywhere else."

From defying initial record-label expectations that her first album would flop, an album that had four hit singles including "Crazy In Love," to now being so big that even a horse fly with a golden rear has been named after her, certainly nobody could tell Beyoncé these days that she doesn't run the world.

P-I-Z-Z-Bey! Sundays are Beyoncé's "treat myself" day, and she revealed to ABC News in 2013 that this almost always involves pizza. Besides it being her self-described "favorite indulgence," Beyoncé also was seen wearing a whole pizza-themed outfit in December 2013.

Beyoncé and Jay Z went on a temporary vegan diet at the end of 2013, which probably made their Sunday Brooklyn pizza dates trickier. One Brooklyn pizzeria even named a special slice after her, calling it the "Beefyonce."

2. Beyoncé is a goddess of charity work. 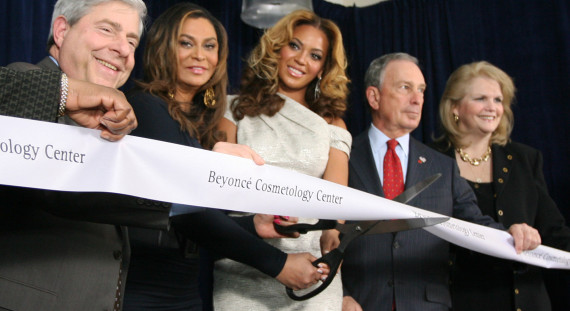 Just about every few months there's a new story of Beyoncé giving back, whether it's her most recent donation of $7 million to the homeless of Houston, to starting global campaigns such as her #BeyGOOD initiative, to extensively fighting hunger. Beyoncé has explained:

I was 13 and my sister Solange was 8 when we started donating and serving meals to the homeless after church. There were people from all walks of life, even children, who needed a meal. We learned that we are all three paychecks away from poverty. It was a lesson in humility for all of us.

3. Sing and run at the same time? Beyoncé can apparently do that for more than a mile.

Many of us may have a hard time just completing a mile, but Beyoncé has no problem singing while she runs the world. Talking with The Times of India, Beyoncé revealed her training regimen from the early days, stating, "My father, who was also my manager, made me run a mile while singing so I would be able to perform on stage without becoming exhausted." Extremely impressive, but maybey a bit intense?

LaTavia Roberson, of the original Destiny's Child lineup, also spoke of these practices, telling The Mirror that Beyoncé's father had the whole band go through this training. "He would make us wake up early in the ­morning and take us to Herman Park," Roberson said. "There was a three-and-a-half mile track and we would sing while we jogged around it."

What motivates her to keep running? Apparently the Academy Awards. After being asked by CBS News whether it's true that she runs on a "treadmill with a big picture of an Academy Award in front of it," Beyoncé responded, "I do. But, it's not right in front of the treadmill. It's over in the corner somewhere. Just so it's in the back of my mind."

4. Beyoncé got the word "bootylicious" into the Oxford English Dictionary.

My dictionary too bootylicious for ya, babe. "Bootylicious" was added to the Oxford English Dictionary in 2004. The online edition of the dictionary currently defines the word as, "(Of a woman) sexually attractive."

HuffPost reached out to Christian Purdy, director of publicity for the OED, who clarified that "English is elastic and ever-changing. We update our dictionaries often to reflect current usage."

5. Queen Bey may be the best Connect Four player of all time and once beat Kanye West nine games in a row.

Kanye West used to play Connect Four all the time, facing everyone from members of his GOOD Music label to a fedora-wearing Jonah Hill, but apparently Beyoncé was the connector to beat. Kanye wrote on his sadly now defunct blog:

every now and then people would speak of this legendary connect 4 champion……….. BEYONCE!!! I had 2 play her!…so last night at Jay’s new 40/40 club in Las Vegas (which is sidebar, crazy big w/ 24krt gold flooring, Black Jack tables, $500 slot machines,the biggest projection screen in the universe and the best turkey burgers I’ve ever had in my life) she beat me 9 times in a row! (and I didn’t even spaz lol)

Yeezus did end up beating the Queen once, but that was probably only after Kanye said in a robotic voice, "How could you Bey so heartless?"

It actually makes sense that Beyoncé is amazing at Connect Four, as "four" is her special number. She further elaborated to Billboard, "We all have special numbers in our lives, and 4 is that for me. It's the day I was born. My mother's birthday, and a lot of my friends' birthdays, are on the fourth; April 4 is my wedding date." Blue Ivy also has the Roman numeral IV in the spelling. Jay Z was born on Dec. 4, 1969. There were originally four members of Destiny's Child. And Beyoncé and Jay Z even got matching "IV" wedding tattoos.

Of course, Beyoncé is actually the Champion of Everything.

All images provided by Getty unless otherwise noted.