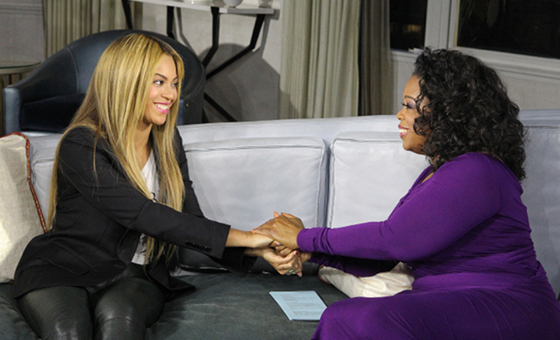 In yesterday's much-anticipated interview with Oprah, Beyoncé finally admitted she was a member of the New World Order, also known as the Illuminati.

Rumors have swirled since the episode's taping; many fans wondered why Oprah never questioned the star about her alleged Illuminati ties and commented that it might be due to Oprah's own participation in Illuminati activities.

Less than three seconds into the interview, Oprah turned to Beyoncé and said, "So, you know what I'm gonna say to you ... the Illuminati." From there, Bey delved into her beginnings with the group, their assistance in her rise to fame, and her recent promotion to the highest ranks of the order.

Beyoncé says she finally came clean after feeling guilty over all the undue credit she's been given. "People keep thinking I'm this magical ageless beauty, when really that's the result of consuming all these blood sacrifices." Oprah interjected, "You still work hard, and you're raising a beautiful daughter." Beyoncé remained critical: "People ask me how I juggled my career and pregnancy without understanding that reptilian pregnancies last only 2 months."

Oprah's surprised reaction following this statement has been deemed inauthentic by fans. As godmother to Blue Ivy, she would have presumably been present at both the conception ritual and birth ceremony.

The pinnacle of the interview was when Oprah solemnly asked if the Illuminati was behind the death of Whitney Houston. "Yes, that was us. I was there for that. But at the time I felt, in my heart, that that was what she would have wanted," said Beyoncé.

When it came time to discuss husband Jay-Z's possible ties to the Illuminati, Beyoncé said, "That's something I'd like to keep private. I don't like to air my family affairs out in the open."

"You're keeping something for yourself?" replied Oprah. "Yes, exactly."