Beyoncé may have gotten to serenade the First Couple at the Inaugural Ball in 2009, but on Monday she got a plum promotion: singer of the National Anthem at the 2013 Presidential Inauguration.

For the once-in-a-lifetime event, Beyoncé stepped up her fashion game like no other. She and her husband, Jay-Z, stepped out looking like the American royalty they are: Bey stunned in a long black dress with a swirling black floral pattern, topped off with a long black coat. Her tangerine nail polish popped against emerald jewelry and her hair... well, we've never seen such bouncy locks.

Hova, of course, was no slouch himself in the fashion department. His light blue shirt and tie popped against his sleek gray suit and he had a furry black coat casually draped over his arm. Oh, and he wore some stunna shades. Obviously.

Seriously, this couple takes our breath away. Check out photos of Beyoncé and Jay at the 2013 Inauguration below. Are you loving Bey's outfit as much as we are?

UPDATE: Beyoncé's stylist Ty Hunter confirms to us that Bey is wearing a Pucci dress, a Christian Dior coat and Lorraine Schwartz emeralds. 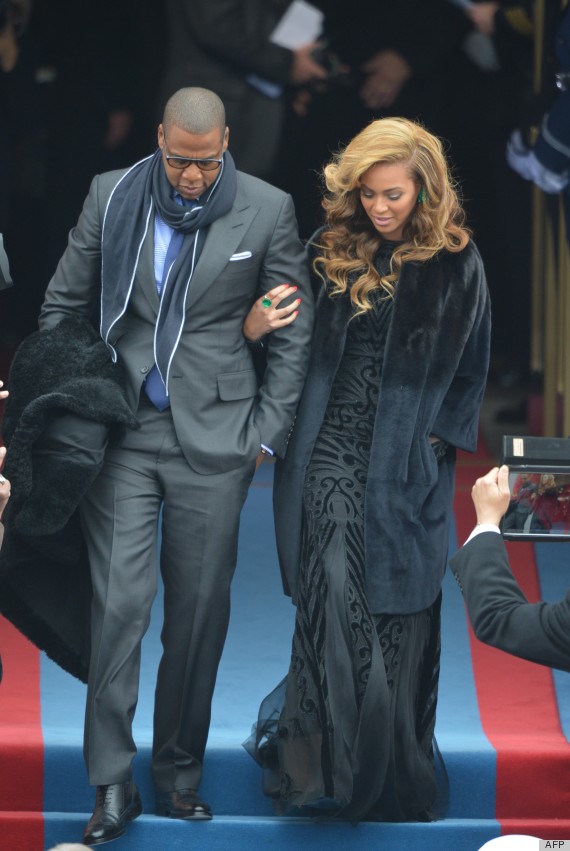 Beyonce & Jay-Z Stun At The 2013 Inauguration

More:
StyleVideoinaugurationBeyonce
Newsletter Sign Up
An essential daily guide to achieving the good life
Subscribe to our lifestyle email.
Successfully Subscribed!
Realness delivered to your inbox