Even though Beyonce and Jay-Z welcomed little Blue Ivy Carter into the world back in January, that doesn't mean that they've stopped taking time for themselves. Despite their hectic parenting work schedules, they've both managed to spend plenty of time together and keep up in the style department.

Beyonce, for one, has continued to rock her signature curve-hugging outfits, stunning fellow attendees at this year's Met Gala in a sheer gown and making her own husband's jaw drop in black leather hot pants during his Barclays Center concert. And even though Jay-Z spends plenty of time making sure that his daughter is the most "spoiled little kid ever," he's also kept on turning it out in dapper suits and effortless street-to-stage gear.

So when the world's highest-earning couple decided to step out for a sunset dinner in Battery Park, we couldn't help but notice how cool they looked. Beyonce's leather pants, wedge sneakers, round glasses and top knot were completely on-trend yet so trend-setting at the same time -- it's like the singer can make anything look fresh. As for Jay-Z, he also rocked shades, but the rapper added a pop of color with a bright blue sweatshirt and khakis.

Our parents certainly didn't look this hip during their date nights. But, then again, our parents didn't get child-rearing advice from the president of the United States, so we may be talking apples and oranges here.

Check out the photo of Bey and Jay during their dinner date last night and tell us what you think. 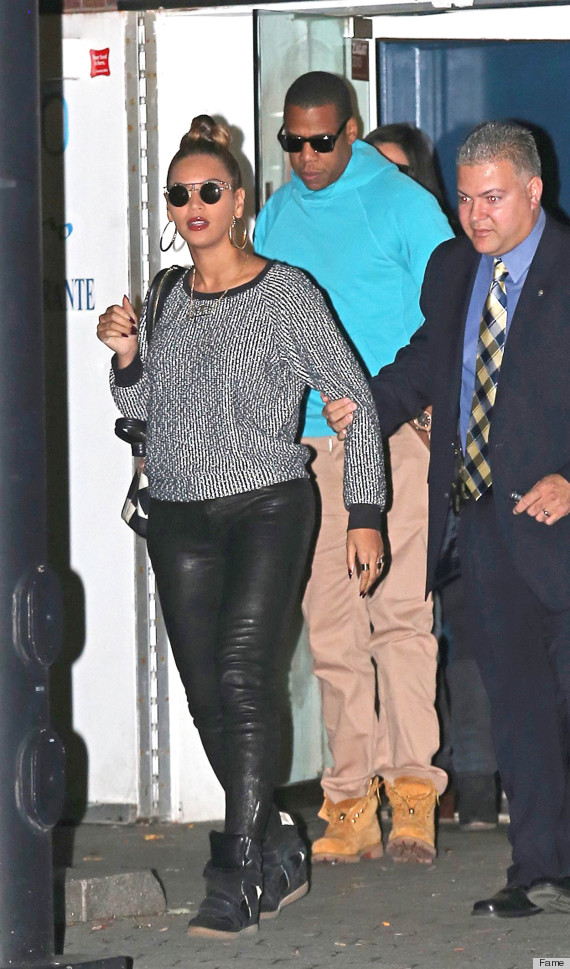 Check out some celebrity couples who also coordinate their looks!