Beyonce hasn't officially addressed the latest pregnancy rumors, but if you can take a hint -- it sure seems like she's trying to tell us something.

Two weeks ago, E! broke the news that the "Single Ladies" singer and husband Jay-Z are expecting a second child, a younger sister or brother for Blue Ivy. These reports were fueled by the cut of Beyonce's Met Gala dress and by the cancellation of one of her shows on the Mrs. Carter Show World Tour.

No other source has confirmed this since, and days later rumors started swirling in the opposite direction. A New York radio director who goes by Old Man Ebro emailed Jay to send some well-wishes regarding Bey's pregnancy, and the rapper reportedly responded: "It's not true. The news is worse than blogs."

Now, Beyonce has taken to her Tumblr page Beyonce | I Am to post her "response." In a series of photos Bey uploaded from Berlin earlier this week, she is seen sitting in Jay-Z's lap, sipping wine. To make absolutely sure we understand that it is indeed wine she is sipping and not crimson-colored juice, another photo shows a closeup on the wine bottle, a 2000 Barolo.

You know what they say -- pregnant women are usually advised to abstain from alcohol. Is Beyonce's drinking her way of telling us she's not expecting? Only time will tell.

See the photo below: 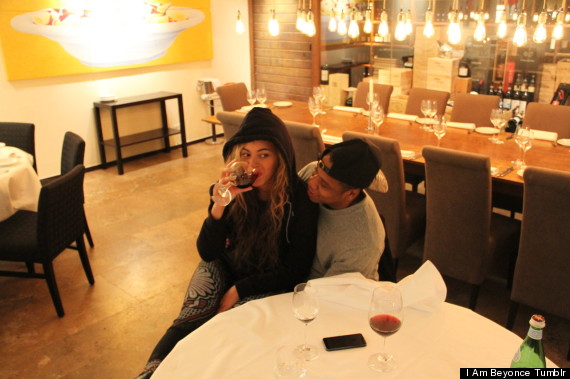