According to a statement from L'Officiel:

Far from the glamorous Sasha Fierce, the beauty posed for the magazine with amazing fashion designers clothes, but also in a dress created by her mother. [It is] A return to her African roots, as you can see on the picture, on which her face was voluntarily darkened. All the pictures will be available in the collector edition, on sell at the end of this month.

When you paint your face darker in order to look more "African," aren't you reducing an entire continent, full of different nations, tribes, cultures and histories, into one brown color? [....] What if Beyonce were an Asian singer painted to look like a geisha, or given exaggeratedly almond eyes? Perhaps even more important: By painting Beyoncé's face darker, aren't the French fashion editors basically treating her like they would a white model, i.e. a blank-palette object on which to place concepts? And not an actual, authentic black person with African heritage?

Brown Sista notes, "Beyonce is almost unrecognizable to me, as her skin color has once again been manipulated by magazine editors so as not to offend their mostly white female audience." And The Root reminds us of Beyonce's 2008 L'Oreal ad, in which her skin appeared to be digitally lightened.

Take a look at the news report from France's TF1 below and tell us what you think. 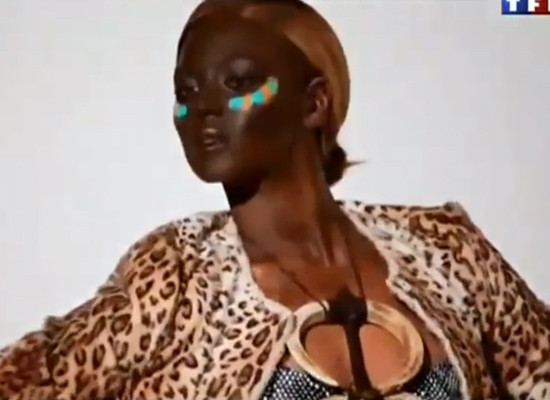