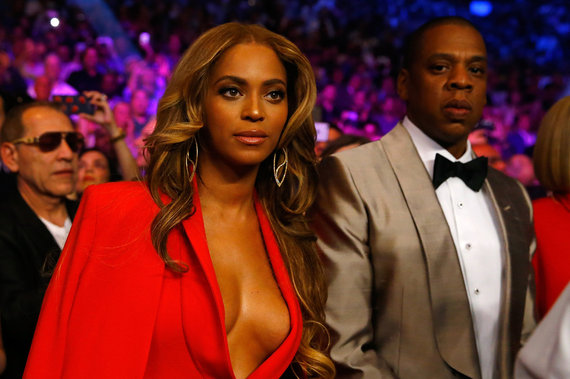 Floyd Mayweather beat his opponent Manny Pacquiao while millions watched and millions were made on Saturday night. In between rounds, viewers were given a glance at the celebrities attending the event such as Denzel, Nicki Minaj, and most notably Jay-Z and Beyoncé. Even if you didn't watch the fight, you probably heard about her outfit (which is what many writers are focusing on.) Beyoncé looked dazzling in a revealing red jump suit and immediately captured everyone's attention. But while everyone else was fixated on her outfit, I felt a sense of disappointment when I saw her, one of my favorite artists, in the audience.

I should begin by saying that I am a HUGE Beyoncé fan, I think she is beautiful, talented, an incredible example of a businesswoman, and someone whose work speaks to a variety of life experiences. I have also felt encouraged by Beyoncé's declarations of being a feminist, even though this claim has garnered a lot of criticism for her. Criticism such as bell hooks (one of the most prominent thinkers of our time) calling her a "terrorist" for claiming a feminist identity without fully embodying it, in hooks' opinion. As much as I love bell hooks, I've disagreed with her assessment of Beyoncé's feminism, feeling that Beyoncé has represented women's independence and strive for equality superbly. So why was I so disappointed to see her at the fight?

Due to Beyoncé's unquestioned fame and influence she inevitably endorses any brand she chooses to wear, make-up she decides to apply, and event she attends. And this event was perhaps one of the, if not the, most antifeminist events of the year. CNN says the following:

That Mayweather is a serial batterer of women cannot be disputed [...] Mayweather has had at least seven assaults against five women that resulted in arrest or citations in addition to other episodes in which the police were called but no charges filed.

Mayweather is violent towards women with very little remorse. It is impossible for me to watch him fight without picturing the victims of his domestic violence on the other side. Now, while Pacquiao has not been charged with domestic abuse and has in fact stated he is completely against it, he's pretty antifeminist himself. According to The Daily Telegraph, in his position as a congressman in the Philippines, Pacquiao has been vocal about his opposition of women's rights to birth control and family planning programs; he has also stated his opposition to same sex marriage.

So, my disappointed comes in Beyoncé's clear endorsement of a very antifeminist event. One of the reasons bell hooks is so critical of Beyoncé's feminist declaration is because she feels that some women, like Queen Bey, infiltrate the feminist movement and wave the feminist banner only to continue doing antifeminist things. In this example, I cannot disagree with hooks.

If Beyoncé wants to call herself a feminist and an example for all other women of what feminism looks like, she just cannot attend, endorse and help to fund two men who disrespect women and their rights. She did indeed look stunning that night, but I wish she had shown off her outfit and beauty at a different event.

Writer and teacher based in the Bay Area. Stanford University BA, University of Cambridge MPhil - Specializes in Race and Gender.