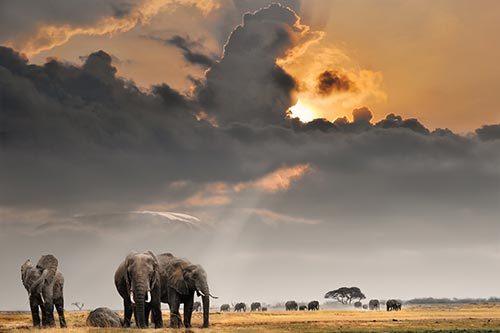 The Althelia Climate Fund, based in Luxemburg and London, has packaged many of the elements that bankers and conservationists alike say are necessary to attract private capital to large-scale ecosystem conservation projects around the world.

The most recent validation of Althelia's model comes in the form of a $5 million investment from the David and Lucile Packard Foundation*. Along with two private investors who will announce their commitments later this year, Packard's investment brings Althelia's fundraising to approximately $117 million and keeps the fund on pace for a December closing, when it aims to report at least $150 million. A first round of $76 million closed last June.

Althelia is one of a handful of funds that finance reduced carbon emissions from improved practices in both forestry and agriculture. Three years ago, Packard invested $1.5 million in the EKO Green Carbon Fund to accelerate the development of carbon credit markets, especially for agricultural projects. The African Development Bank recently announced a $12.6 million investment in the Moringa Private Equity Fund, bringing the fund's commitments to about $88 million. Moringa backs agroecology projects in Africa and Latin America

Althelia's first two investments aim to improve livelihoods for local residents and generate cash flows from "agroecology" products -- premium cacao in Peru and sustainable charcoal in Kenya -- to augment sales of carbon credits in the volatile voluntary markets. A guarantee from USAID limits investors' loss exposure to 50 percent of their capital.

A report earlier this year, "Conservation Finance: Moving Beyond Donor Funding Toward an Investor-Driven Approach," from Credit Suisse*, McKinsey and the World Wildlife Fund, estimated the annual conservation financing gap at $400 billion a year. The report suggested that $200 to $300 billion in private capital -- a 20- or 30-fold increase from current levels -- could be mobilized with the right financial structures. The need is particularly urgent in forest preservation: deforestation and forest degradation account for nearly 20 percent of global greenhouse gas emissions.

"It's a gap that will only be filled if private capital is deployed through intelligent structures," John Tobin, Credit Suisse's managing director and global head of sustainability, said at the recent Social Capital Markets conference in San Francisco (see video). "It requires the deployment of good structuring muscle - structuring good financial transactions that have a true double bottom line."

That said, the gap represents only about 1 percent of the investable capital of high net-worth individuals and institutions, Tobin said. "To our surprise, there was a huge interest on the part of private, high-net worth individuals, to be able to put some of their wealth into this area," he said. "If that gap is filled with private capital, it could be a happy story."

Althelia's fund managers and co-founders, Christian del Valle and Sylvain Goupille, built an environmental markets team inside BNP Paribas in the mid-2000s. They soon recognized the need to expand beyond the carbon markets and to build a broader capital base. Investors in Althelia first round included the European Investment Bank, the Dutch development bank FMO, FinnFund in Finland and the Church of Sweden. Del Valle declined to specify Althelia's anticipated performance beyond saying the fund is aiming for "market-based" returns.

A key break in attracting private investors came in May when USAID, through its Development Credit Authority, agreed to guarantee 50 percent of any losses on the fund's loans of up to $133.8 million. With the price of carbon falling on the voluntary markets in the past year, the guarantee was particularly intended to reassure private investors entering a new investment sector.

"It gets money flowing not only from Althelia to the borrowers, but also encourages other investors to come into the fund," said USAID's Stephen Matzie. "We were attracted to Althelia because they emphasized non-carbon aspects as much as carbon. We urged them to discount carbon, so they were not just banking on carbon."

With the USAID's partial guarantee, Althelia ticks most of the boxes considered critical for successful conservation financing. "That Althelia can launch its first fund with a capital commitment of more than $100 million is testimony to the true emergence of double bottom line investing in the rapidly maturing field of conservation finance," said Peter Stein, managing director of Lyme Timber Co., one of the earliest sustainable forestry funds.

Althelia is one of the first funds to offer long-term financing, including commodity-based lending adapted for rural enterprises, to reduce emissions from the full gamut of agriculture, forest and other land uses, or AFOLU, as it is known in the field.

In the Taita Hills of southeastern Kenya, Althelia's investment of $10 million over eight years is intended to preserve 200,000 hectares of forest and savannah grasslands near the Tsavo national parks, among the largest in the world, and home to elephants, rhinos, lions, leopards, and hippos. Wildlife Works, the local partner, already manages two nearby REDD+ projects (for Reducing Emissions from Deforestation and forest Degradation). The new project is significant in that it values the carbon stored in grasslands in addition to forests.

"We have a lot of exciting opportunities on our desk right now," del Valle said in an interview. "We're not seeking simply good ideas, but rather opportunities that have proven track records and are ready for replication and scale, with partners who have demonstrated competency in the field."

With growing populations and increased consumption, nature is getting squeezed at the same time that public budgets are increasingly constrained and donor and philanthropic funds are limited, del Valle said.

Private capital is "a game-changer, and absolutely essential," he said. "Can the combination of market rate returns and environmental and social excellence actually drive one another? We believe so, and a lot of people are watching us to see if we're right."

*Disclosure: The Packard Foundation and Credit Suisse are financial sponsors of ImpactAlpha.