As the nation watches the unfolding crisis of flooded fracking sites in Colorado, statewide advocates gathering in Chicago tonight for the Illinois Environmental Council's 11th annual "Environmental Leadership Dinner" might want to honor the extraordinary efforts of some real environmental leaders on the extraction frontlines in southern Illinois instead of long-time boosters for "clean coal" and fracking jobs.

According to the IEC website, the annual Environmental Leadership Awards recognize "legislators, individuals, organizations, or businesses that have made a significant achievement in the past year towards addressing the environmental community's most significant issues."

Sounds good. But, on the heels of honoring Big Coal state Rep. John Bradley with a 100 percent environmental rating last month, despite his efforts to stop a fracking moratorium bill and his success in ramming through an overlooked but nasty strip-mining bill, the biggest honor tonight goes to state Senator Mike Frerichs (D-Champaign), who led the state's admittedly flawed fracking regulatory bill, in his words, "so that we can start the process of bringing the hydraulic fracturing jobs to Illinois."

Frerichs' own line bears repeating at the IL Environmental Council tonight: "So that we can start the process of bringing the hydraulic fracturing jobs to Illinois."

The IEC will also honor two Chicago-area state legislators for their bills on green stormwater infrastructure and municipal aggregation and the restoration of recreation liability protections to private landowners.

While he admirably speaks against climate change these days, Frerichs' commitment to dirty energy jobs, in the name of "environmental regulations," is well-known in Illinois: As one of the biggest boosters of the FutureGen "clean coal" boondoggle, Frerichs joined disgraced Gov. Rod R. Blagojevich years ago as part of the state's coal revival program and made the same claim for regulating "clean coal" and destructive coal mining as he does now fracking regulations:

"Governor Blagojevich and I understand that we must continue to invest in clean coal technologies. These grants allow the coal industry to focus on higher environmental and safety standards, while creating more jobs throughout the region and across the state."

Here are a few real "environmental leaders," among many in southern Illinois, where virtually all of the future fracking and largest coal mining operations take place:

1: The County Commissions from Pope, Union, Hardin, Johnson, and Jackson Counties That Voted for a Fracking Moratorium in Southern Illinois

Despite the fact the Frerichs' state fracking regulatory bill was negotiated with the gas industry behind closed doors with inexperienced environmental representatives and without a single citizens group participating from impacted communities in southern Illinois, county commissioners in five key southern Illinois areas courageously stood up to the gas industry and state official pressure.

Steve Hudson, a Pope County commissioner, introduced the fracking moratorium, and made a statement to the Chicago Tribune that should have won accolades throughout the state:

"Money's not everything in life,'' Steve Hudson, a Pope County commissioner, said of landowners who have sold mineral rights to oil and gas companies. "Sometimes we need to protect what we got. We're just keepers of this land."

Pope County has only 4,300 residents, not a single traffic light, and the highest concentration of national forest in the state. "This county's based pretty much on tourism, and I just can't see this becoming a wasteland," Hudson said.

2: The City of DuQuoin and Its Breakthrough Solar Park in Coal Country

By investing their own city dollars and amassing grants and stimulus funds, the city leaders of DuQuoin lit up a small but groundbreaking solar park in the heart of southern Illinois' coal country last year. Using union labor, unlike virtually all of the state's main coal mines, the solar park "is a way to provide reduced electrical cost to our industrial park occupants, this makes operations for these folks at our industrial park more profitable and more productive," according to the town finance commissioner Rex Duncan.

DuQuoin's uniqueness is a reminder that in a recent report on clean energy and green jobs in Illinois, not a single project was located below the central Illinois capital of Springfield, with most green jobs going to Chicago: 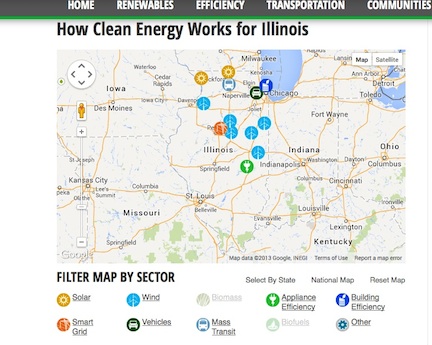 Courtesy of Clean Energy Works for Us

In one of the most under-reported stories this year, the town council of Carbondale -- where Southern Illinois University boasts of its "clean coal" research program, where the coal export industry was launched nearby 200 years ago, and where huge corporations from New York listed ads 150 years ago to invest in the future of Mt. Carbon -- voted to approve a 100 percent renewable energy electrical contract in January. According to City manager Kevin Baity, Carbondale was the energy consortium's "only city to choose the fully renewable energy option."

Home of the state's defining and famed Garden of the Gods, the Shawnee National Forest and several federally protected wilderness sites, the last forests of southern Illinois are now game to Frerichs' fracking bill, after a 17-year injunction on drilling was lifted in March.

Thanks to long-time defenders like Sam Stearns, with the Friends of Bell Smith Springs, Barney Bush and the Shawnee Vinyard Indian Community, and Mark Donham and many others with the Regional Association of Concerned Environmentalist, the state's most unique environmental destination will stave off attempts by out-of-state fracking operators.

Unlike many environmental lobbyists and leaders who operate out of their offices, far from the impacted areas of the extraction industries, the grassroots volunteers with SAFE -- Southern Illinoisans Against Fracturing Our Environment -- have taken the lead on the frontlines in southern Illinois to speak on behalf affected communities, to hold legislators accountable to their constituencies instead of outside corporate lobbyists, and to educate rural and unincorporated communities on the realities of fracking, water and air protection, and the flaws in Frerichs' fracking law.