This week, national leaders from around the world are in Paris for the COP 21 conference to demonstrate commitment to emissions reduction and a renewed, global commitment to sustainability.

However, there is another group that will have a significant impact on emissions targets, a group that should have a more robust voice in the discussions. That group is cities.

Cities represent about 55% of the global population and are responsible for around 75% of carbon emissions. In Canada, nearly 85% of our population is urbanized, making cities critical partners for effective climate action. Nations need their cities in order to reach targeted emissions reductions and cities are stepping up. While at the same time, cities need their nations to better confront the challenges of climate change since their citizens are increasingly vulnerable to climate effects.

As national presidents and prime ministers begin to depart from Paris, city mayors begin to gather. Mayors will be sitting down later this week at the invitation of Paris' Mayor Anne Hidalgo and former New York Mayor Michael Bloomberg to discuss what they can do to affect change. A large forum for mayors and city leaders will also be convening in Paris as part of the UN Secretary-General's Climate Change Support Team.

Cities are strategically positioned for taking effective climate action. City mayors worldwide are setting ambitious objectives and plans for the reduction of emissions, and taking action on multiple fronts under their responsibility, like improved energy efficiency in buildings, expanded public transportation and low-carbon mobility and innovative waste management practices. Many seek to achieve 80% reductions by 2050 or even achieve net zero emissions - for example, the City of Melbourne. Cities have a lot at stake in the climate agenda. The sheer concentration of people, businesses and resources is making cities much more vulnerable to the adverse impacts of climate change, such as rising sea-levels and increasing severity and frequency of devastating storms. Cities globally are likely to bear a major share of the escalating risks in the coming years and the financial burden associated with climate adaptation. Closer to home, the City of Toronto has been stepping up for Canada on the global stage. Toronto is one of twenty cities worldwide that now has globally standardized data as reported into the World Council on City Data (WCCD) in conformity with ISO 37120, the first ISO standard for cities. Globally comparable, standardized city level data in the WCCD Open City Data Portal means cities can track progress relative to other peer cities globally. Working alongside the Global Cities Institute, at the University of Toronto, an agenda is being set around curating good quality, city level data to drive data informed decision making and an innovative global city dialogue. As city leaders begin to create a plan for moving ahead after COP21, it is imperative that they start taking stock of what kind of data is available to them, and what they will need to drive real change and success. According to WCCD data, we now know how Toronto measures up today on greenhouse gas (GHG) emissions in comparative terms to other global cities. Relative to other large North American cities, Toronto has lower GHG emissions (Graph A) per capita (at 7.33 tonnes per capita) than, for example, Boston (10.8 tonnes per capita) and Los Angeles (13.39 tonnes per capita). However, relative to other European cities, Toronto produces higher GHG emissions per capita than Barcelona, London and Amsterdam (which range from 2.36 to 5.5 tonnes per capita). We also know how Toronto stacks up on critical mobility indicators affecting carbon and the climate agenda. For example Toronto lags behind other global peer cities in terms of "mode share", which refers to the percentage of commuters using a travel mode to work other than a personal vehicle. Approximately half of Torontonians use a personal vehicle to commute to work, while in Barcelona the number is closer to 1 in 10, and in London, 1 in 4 (Graph B). 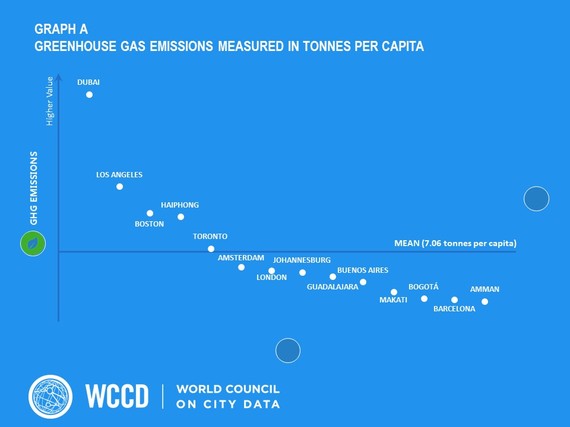 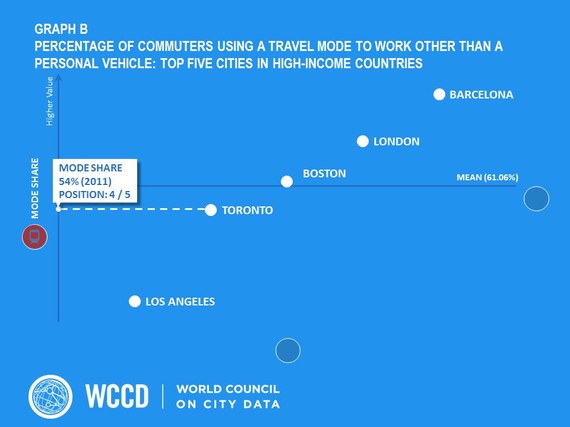 The data on bicycle lanes (Graph C) in cities worldwide reflects an emerging potential for a low carbon mobility option and this data can also inspire city targets and mobility policy when measured in global perspective. Toronto's data on kilometers of bicycle lanes is 18.3 per 100,000 population. While ahead of London (with 5.86 km of bike lanes per 100,000 population) and Barcelona (with 6.51 km of bike lanes per 100,000 population), we can say Toronto is moving in the right direction. However, the data from other global peer cities can inspire Toronto to set even higher goals and targets, and exchange with cities such as Boston, whose bike lanes number 30.29 km per 100,000 and also Rotterdam, who reports the highest number of bike lanes at 102.9 kilometers per 100,000. (Graph C) Rotterdam after the Second World War, was once an automobile dominant city, but City leaders shifted this culture through strategic steps, including creating safe and separated lanes that children and adults can share for their commute to school and work, and bike lanes for longer distance commutes between the core and the inner and outer suburbs. 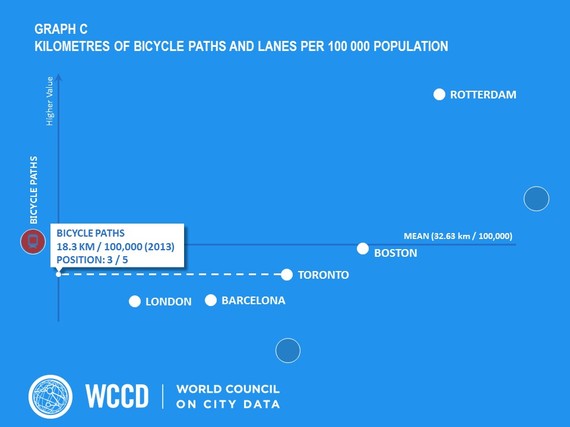 City progress on the climate agenda depends heavily on collaboration from senior levels of government. Actions on climate by provincial governments across Canada support city climate targets. Ontario's policy to phase out coal power reduced Toronto's emissions from electricity production and Toronto's data on electricity from renewable sources places it in the highest ranks amongst global peers at 29%. A similar story emerges when examining the city's waste metrics. The recent commitment of Prime Minister Trudeau in working with the Premiers towards an acceptable, Canada-wide solution on the climate file also speaks to this spirit of collaboration, but any commitment must explicitly include cities. The emerging opportunity here is the Prime Minister's stated commitment to elevating infrastructure investment where provinces and cities will be partners. This could be a game changer for cities across Canada. As Mayor Tory heads to Paris, his commitment to the climate agenda and key messaging in climate action providing new economic investment and job creation for Torontonians resonates with this timely infrastructure opportunity coming from Ottawa. Whether it's with a view to Calgary's flooding or Toronto's ice storm, serious investment is needed to help cities better cope with climate-related events. The opportunity lies in getting this right, this time around. This means a city level data-driven model that will inform a more strategic set of investments in resilient infrastructure across this Nation's cities. For cities to take a leading role in moving the needle on carbon emissions, they require massive infrastructure investment to expand public transportation and create low-carbon mobility solutions. They must scale up local renewable energy production and improve energy efficiency in buildings, and expand and innovate waste management practices. High calibre city level data should drive this investment. Cities on the global stage require it. Cities are at the forefront of the global shift to a carbon-neutral future. They are also the centres where innovation for climate action and more sustainable economies and societies are being created and re-created on a daily basis.