Now I used to think that I was cool, running around off fossil fuel, until I saw what I was doing was driving down the road to ruin.

When James Taylor wrote the song, "Traffic Jam," was he just stuck on the road or he was predicting the devastation of global warning?

Leaders of the Presbyterian Church USA are convening this week in Portland, Oregon for their bi-annual gathering known as General Assembly. Last month, the United Methodist Church met in the same place for its General Conference. At gatherings like these, there is much to do - lots to discus, actions to be taken and plans to be made. Yet at most events like this, there is often one topic that captures the headlines; topics and issues which are often controversial and potentially divisive. For Presbyterians at this year's General Assembly, climate change and divestment from fossil fuels is taking center stage. 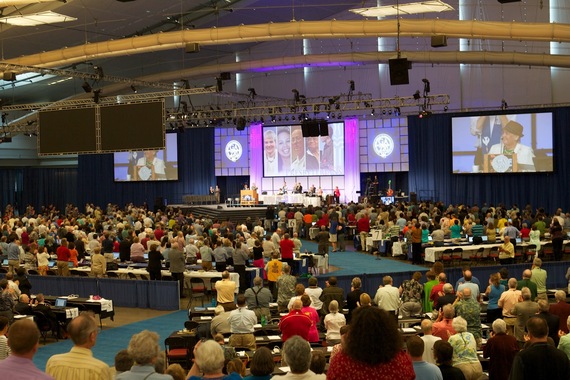 (Leaders at the last PCUSA General Assembly held in Detroit)

Divestment is both important and complicated. As a result, there are like-minded individuals who take opposing positions. For many who champion divestment, it is seen as something both symbolic and substantial. For those who argue against divesting, a key argument is that investing is a way to maintain a voice and influence discovery and innovation around cleaner forms of energy. Others argue that changing consumptive patters is the key to effecting change. With both sides so passionate and certain, divestment runs the risk of being divisive. We don't know if the proposals by the denomination to divest from fossil fuels will either be adopted or defeated. What we do know is that that despite differences on strategy, there is a greater need to remain united in our common cause to combat climate change with unity and urgency.

Communities of Faith as Movement Builders
Communities of faith are called to build movements and to do that, a community must come together to articulate a vision, develop a strategy and provide a delivery system. What the earth needs right now is what faith communities have done historically: identifying an issue of importance, claim moral authority, practice courageous engagement, offer reconciling grace and present faithful witness to change hearts, rebuild neighborhoods and improve the world. Climate change is no different.

Faith communities are called to develop and offer a theological construct that calls and leads people to be good stewardship of the earth. This message must be placed front and center in all that we do, including prayer, worship, proclamation and engagement in the world. Changes of heart and habits are more likely to begin and be sustained where there is a theological underpinning tied to it.

Last fall I attended Dr. William Stacy Johnson's class on Environmental Theology at Princeton Theological Seminary. The lecture that night was given by Rev. Abby Mohaupt, a Presbyterian pastor who works with farmworkers and their families in Northern California. It was from Rev. Mohaupt that I first heard about the trauma and PTSD caused by the effects of climate change. In a sermon "Having Hope to Survive the Trauma of Climate Change," Mohaupt writes,

We have gotten stuck in place, feeling helpless and unable to respond to climate change--overwhelmed by the facts and figures that point to the end of everything we know about creation and life in it. We look to the impending end of everything and everyone that we know and love and we become paralyzed.

Drawing on the work of Serene Jones, Mohaupt goes on to write:

Psychologists define trauma as something that is inflicted on someone that can be perceived as a threat and cannot be resisted. It is a form of violence that feels inescapable and terminal. One of the effects that trauma causes is a "paralyzing lack of agency." We think we cannot do anything. ...We are traumatized by the inevitable change in climate that has and will hurt us, the people, and the creation we love.

There are so many things we will need to do to care for creation in response to climate change, but there is so little being explored about how to care pastorally for the people who are affected.

Mohapts's convictions about climate change and trauma are echoed in the recent White House press release, "What Climate Change Means for Your Health and Family." Regarding mental health, the report states:

Identifying and Addressing Trauma
So what do faith communities do to respond to this devastating, debilitating and even deadly trauma? We are called to come and stay together to continue to design, discuss and implement policies, and to develop both micro and macro strategies to reduce consumption, explore innovations to alternative energy sources, and to clean up pollution that already exists. We are also called to see people's pain, to uncover unuttered fears, and to convey that God's love is present in our lives. We can do that by:

• Naming the trauma that is caused by climate change and validating its impact on the physical and mental health of all
• Training clergy and other members of congregations to watch for the signs of trauma, particularly as it impacts children, and parents of young children,
• Having congregations serve as centers of public education and action where all members of a community are inspired to act, to see tangible results and to deepen their engagement
• Embracing the crisis of climate change and committing to courageous engagement with a skeptical generation who does not trust, but yearns for spiritual discovery and a genuine community that can transcend paralysis cause by trauma and fear.

Martin Luther said, "Even if I knew that tomorrow the world would go to pieces, I would still plant my apple tree."

When I first heard this, I thought it sounded crazy. Why bother? But as I have lived my life, I have discovered that I would do as Luther -- with shovel in one hand and a beer in the other. What appears hopeless in fact is hopeful, a faithful people acting against all odds, believing in our capacity to bring about change and God's grace. Love and faithfulness to help us do that. The energy, creativity and resolve to move from trauma to a transformation of hope, healing, reconciliation and love. As long as there is breath, there is life. As long as there is life, we have hope. Whatever side of the divestment issue we each fall on, now is the time for action.