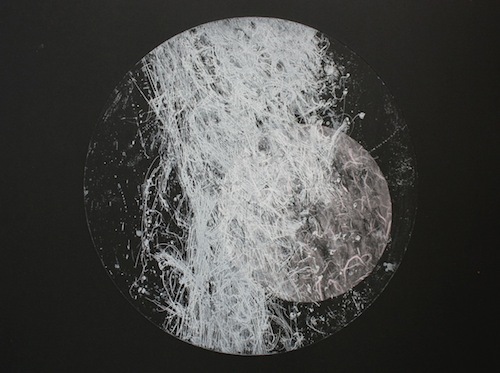 Frieze London opens this week (through Saturday, October 18), and includes a whirlwind of programs including talks, film screenings and performances. The fair itself features the work of over 1,000 artists exhibited by 160 galleries including London-based galleries such as Sadie Coles HQ, Timothy Taylor Gallery and White Cube, among many others. If you feel like venturing out of the main tent in Regent's Park, we've assembled a list of satellite events taking place around London in the coming days.

1. Check Out Glenn Ligon at the Camden Arts Centre: If you're sick of the art fair scene, then London has plenty to offer by way of excellent exhibitions including "Call and Response," an exhibition of new large-scale works by American painter Glenn Ligon. Known for creating challenging, socially conscious text-based works, the exhibition at the Camden Arts Centre is based on the minimalist composer Steve Reich's taped testimony "Come Out." Culled from testimony given by six black youths during the Harlem Race Riot of 1964, Ligon's paintings create abstraction and rhythm using their words. The exhibition also features Live on Sunset Strip, a video work that re-combines footage taken of a 1982 performance by comedian Richard Pryor.

2. Go Underground: Even from afar, it seems like Frieze has taken over most of London. If you'd like to see some of the action without having to pay for it, check out the elevators in the Regent's Park tube stop, which feature posters created by Ryan Gander and Cory Arcangel. The posters by Gander read, "very grown up," and those by Arcangel, "what are we thinking?" The cryptic messaging describes the joint working process of the two artists for the installation. The gallery that represents them, Lisson, conceives of the posters as a public extension of their booth, which will also feature an installation by Joyce Pensato that recreates part of her Brooklyn studio. If you make it into Frieze London stop by the booth if only to see the staff members and dealers sporting wearable works of art and custom-made suits.

3. Isabel Lewis Plays Hostess to the Art World: Born in the Dominican Republic and living and working in Berlin, Isabel Lewis is known for staging happenings in different cities that involve music, smells, talks, people and plants. During Frieze, Lewis will host a number of events in collaboration with ICA at the Old Selfridges Hotel (October 14 - 15) and Fenton House (October 17). Free to the public, Lewis aims to offer a space that is a salon, a lounge and a bar all at once. The Old Selfridges Hotel is also the site of a week of programming offered by the ICA that includes Rhizome talks, live performances by artists such as Korakrit Arunanondchai and a dance performance by Siobhan Davies.

4. See An Art Fair At Christie's: Now in its fifth year, Multiplied, a contemporary art in editions fair, will be held at Christie's South Kensington location from October 17 - 20, 2014. Featuring booths from 40 galleries around the world, the event will also consist programming including a live 3-D printing demonstration by Professor Steve Hoskins (11am on October 17), a talk between Yinka Shonibare and Iwona Blazwick, the director of Whitechapel Gallery (4:30pm on October 17), and a demonstration on creating Japanese ukiyo-e woodblock printing with Sara Lee (all day October 18). Plan to see prints, photographs, artist books and 3-D multiples along with work by recent graduates from London's leading arts universities. Even if you don't plan on buying anything, go for the demonstrations -- they'll teach you more not only about contemporary art, but also the way that prints have been made throughout history.

5. Visit Dominique Lévy's New Gallery: Located at 22 Old Bond Street, the space opened on October 13. Its first exhibition is "Local History," which takes place concurrently in New York and London. Bringing together early works from the 1950s to 1970s by Enrico Castellani, Donald Judd, and Frank Stella, and then juxtaposing them against later works by the same artists, the exhibition highlights not only the evolution of each practice, but also the way their aesthetic similarities. Organized by art historian Linda Norden, with Peter Ballantine, the leading expert on Donald Judd, the show provides context to the contemporary art fairs -- after all, no movement exists in a bubble, and the reverberations from artwork made in 1960s can still be seen trembling in work made today.

Read more of our picks from Frieze London here.

--Brienne Walsh is a writer and photographer who contributes to publications such as The New York Times, Art in America, Interview, ArtReview, Modern Painters, Departures, Paper, New York Magazine, and Forbes among others. She has also appeared as an art expert and blogger on television programs including Today and Anderson Cooper Live. Brienne received her BA in art history from Brown University in 2004, and her MA in Critical Studies from Columbia University in 2011.