This past weekend the Architecture + Design Museum launched an exhibition, Beyond Graffiti II, across the street from the Los Angeles County Museum of Art. Some of the artists in the exhibition included Axis, Atlas, Chaz Bojorquez, Aise Born, Phantom, Krush, Dreye, Defer, Kofie, Fishe, Eder, and a few others. I heard a few people mention how interesting it was to have an architecture museum host a concept related to art that originated in the decadent streets, however, the relationship between architecture and graffiti, and between architecture and muralism in Los Angeles, dates back to the Great Depression. In 1932, the Chouinard Art Institute hired the famous Mexican muralist, and dedicated communist painter, David Alfaro Siqueiros, to teach a class on fresco technique, which would result in the creation of a mural done with the help of enrolled students. After several days of pondering where the mural would be executed, Siqueiros decided on an outdoor mural since space constraints caused limitations. Moreover, he also saw himself in one of the most progressive and resourceful cities in the world, on the cusp of technological advances and experimentation, thus his radical views would transfer to radical techniques. When he decided on an outdoor mural he proclaimed, "Traditional fresco technique is dead!" considering it had been done that way for about one thousand years. And so... the outdoor mural was born, here in Los Angeles, with the title, Street Meeting. The renowned architect of the building, Richard Neutra, was consulted by Siqueiros, in regards to drying surfaces, paint brush, and concrete finish, subsequently; the spray gun was introduced to produce the best result, precursor to spray paint.

Shortly thereafter, Richard Neutra, Rudolph Schindler, and other renowned architects of the era were contracted to develop master plans and as consultants to create the first housing projects in Los Angeles, as a way to create outdoor villages, mostly for Mexicans and Mexican Americans who according to sensationalized media, lived in slum housing. The idea of the housing projects were to clear slum housing and replace them with village-like indoor/outdoor pastoral living, in classic utopian experimentation as a socially engineered concept. Instead, the housing projects created resistance, disorganization, and quarantine, which consequently helped produce ghetto-like communities similar to urban planned Jewish ghettoes in Europe, also as a form of quarantine. Coincidentally, the first street gangs in the city developed in the housing projects around the same time, and because many were looked at as personas non-grata and substandard citizens, they developed a reactionary social contract out of territory and provincialism, which in a way illustrated their own form of patriotism during wartime hysteria. This benchmarked the origins of consistent block letter cement carvings in the form of graffiti, resulting in California modern architecture, design, and graffiti, all born out of depression.

I caught up with the artist Fishe that evening, who has elevated his tagging and graffiti style to the level of mathematic summations. After several years of painting illegally on the streets and maintaining consistent credibility, he pursued a Bachelors of Fine Arts from UC Riverside. From his studies, he learned to approach art from different levels of consciousness, which originated in sacred geometry. In 2007, he came across The Secret of the Flower of Life, which identified universal symbols and iconography as mathematical patterns of nature that were recognized by different civilizations throughout the world. Inspired by a universal collective consciousness, he began to incorporate these images as superimposed patterns to create a new aesthetic, as cylinders, octagons, cones, and so forth, with the tag as a recurring motif that appears on a canvas or wall. The tag itself has become reconsidered and has taken on a new dimension, as part of another layer, sometimes in a constant pattern like a mathematical remainder. In Fishe's words, "The tag is pure, honest, and perfect." Moreover, there is a collaborative wall on the side of the museum, done in a classic monochromatic theme, stemming from hardboiled literature, film noir, prison tattoos, territorial hand styles, German Expressionism, and Dark Progressivism, ideas that have had a strong reinforcement in Los Angeles, and have affected the world. 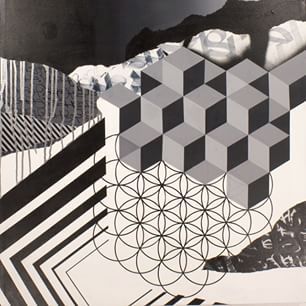 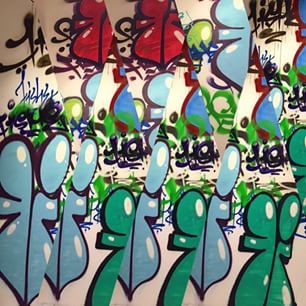