We recently got our hands on some offerings from Beyond Meat, a relatively new vegan startup that claims in a press release that its plant-based "chicken" has "all the protein, taste, chew and enjoyment of chicken" minus the antibiotics, hormones, GMOs, trans fats or cholesterol present, in varying degrees, in the real thing.

But how do those claims hold up? After hearing about these products for months -- they'd previously only been sold on the West Coast, but the company is widening its distribution in 2013 -- the Huffington Post decided to put three flavors of Beyond Meat chicken strips to the test: Lightly Seasoned, Southwest Style and Grilled. 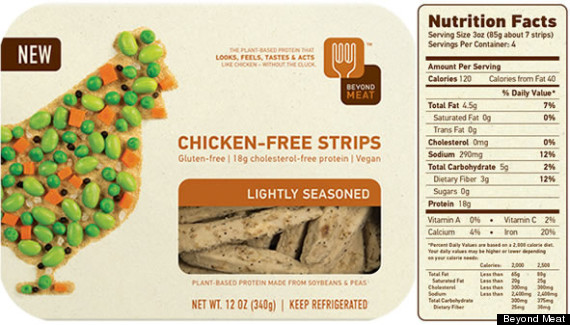 Indeed, all three have a meaty quality to them. Their appearance and texture come close to that of real chicken, but HuffPost editors detected something off -- several, both vegetarian and otherwise, mentioned a sensation akin to the "uncanny valley" phenomenon most often used to describe robots that look too human, such to the extent that they're off-putting. In the same respect, the chicken strips seem to inhabit a strange territory between meat and vegetable, which editors across the board found unpleasant.

On the upside, the strips' flavors aren't altogether unappealing, although the Grilled and Southwest varieties are extraordinarily salty. The smell, however, is a different story. The stuff has a strong, smoky stink with a vegetal quality that smells, well, un-chicken-like.

Back in March of 2012, Mark Bittman offered the strips some faint praise:

The thick strands ... didn’t precisely resemble chicken strips, and when I tasted them unadulterated I found it bland, unexciting and not very chicken-like. But not offensive, either, and as an ingredient we’d all be hard-pressed to distinguish it from most of the animal-based models.

At least one editor agreed with Bittman's latter point, and put forth an interesting point: if the strips were hidden in a burrito, he might not notice they weren't made with real chicken. Now there's a thought.

The suggested retail price for each package is $5.29. For where to find Beyond Meat products, search for your zip code on the company's web site.

Want To Cook At Home More? Here Are 8 Ways To Keep Your Resolution.