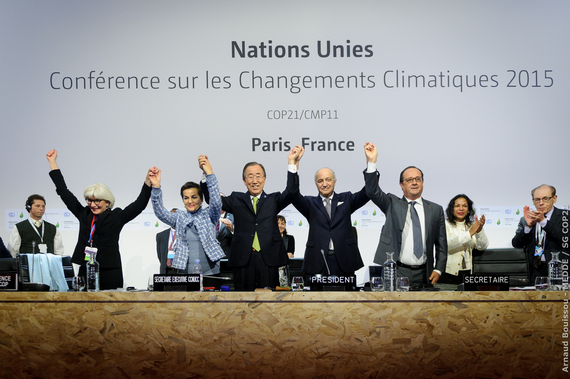 After many sleepless nights, a great deal of behind-the-scenes wrangling, and exceptionally skilled French diplomacy, the Paris Climate Change Conference culminated in a big success Saturday night: the adoption of a new global climate change agreement, backed by 196 countries with very different priorities.

It is important to celebrate this moment. The Paris Agreement alone will not stop climate change, but as the activist Bill McKibben put it, "it may have saved the chance of saving the planet." At a time when many had lost hope for collective action, it sends a strong signal that world leaders are indeed committed to tackling climate change, and lays out a path for ever-increasing climate ambition.

The Small Island Developing States (SIDS), many of which could see large swaths of their territory be consumed by sea-level rise with global warming as low as 2°C above pre-industrial levels, have been pushing for years to replace the 2°C goal agreed in Copenhagen with 1.5°C. Many NGOs had embraced their cause, and in Paris, with support from a broad coalition, they succeeded.

The language reflects harsh realities. Scientists have said the chances of keeping warming below 1.5°C are "extremely slim", as it would require decarbonizing the global economy as soon as 2030 and/or wide deployment of "negative emissions" measures such as bioenergy combined with carbon capture and storage (BECCS).

And yet scientists have also highlighted the difference that 0.5°C could make - not just in terms of sea-level rise, but also heat extremes, crop yield reductions, and water scarcity in some areas. A study released at the COP shows huge implications for the polar ice sheets, glaciers, and ocean acidification as well. We may not achieve the 1.5°C goal, but it would be irresponsible not to try.

The national pledges submitted under the Paris Agreement come nowhere close to reducing emissions enough for a 2°C pathway. In fact, the accompanying COP21 decision emphasizes "with serious concern the urgent need to address the significant gap" between the pledges and the ultimate goals.

To close that gap, the agreement calls for new, increasingly ambitious pledges to be submitted every five years, informed by "stocktakes" starting in 2023 (and a "facilitative dialogue" in 2018). Developed countries are urged to lead by undertaking economy-wide absolute emission reduction targets, and developing countries are urged to "continue enhancing their mitigation efforts."

There is also aspirational language about peaking global emissions "as soon as possible" and achieving "a balance between anthropogenic emissions by sources and removals by sinks" by the second half of the century. Whether the Parties will heed this call remains to be seen - but a new Intergovernmental Panel on Climate Change (IPCC) report on the 1.5°C goal to be published in 2018 will ensure that at the very last, they will have up-to-date science to inform the planning of the next round of national contributions.

Moreover, a new "transparency framework" designed to streamline and standardize reporting of countries' actions - including finance provided - under the agreement can help enhance accountability, both among the Parties and from governments to their citizens. The underlying assumption seems to be that countries will compete to be seen as leaders, and want to avoid being seen as laggards.

Whether that is true remains to be seen: Canada and Argentina reportedly plan to revise their pledges soon, and French President François Hollande has vowed to ratchet up his country's climate goals well before 2020. However, on Monday, EU Climate Commissioner Miguel Arias Cañete ruled out doing the same for the EU as a whole.

The outcome on climate finance is also mixed at best. On a positive note, it defines the Copenhagen target of mobilizing US$100 billion per year as a "floor", and calls for setting a new collective quantified goal before 2025. It also notes "the significant role of public funds" - reflecting growing evidence that private-sector priorities may not match countries' needs, particularly for adaptation.

Yet language to define what could be counted as "climate finance", to address rampant problems with over-counting, double-counting and overly generous definitions, and ensure that only private finance actually mobilized by government actions would be included, was completely stripped out of the text. Though the inclusion of finance under the "transparency framework" could still help to fill this gap, as things stand, the potential for countries to overstate climate finance is very significant.

The Paris Agreement has laid a foundation for global climate action, but it by no means guarantees that its goals will be achieved. It has plenty of clumsy, weak language, kicks the can down the road on some issues, and it omits many key points - most notably, how we'll deal with the elephant in the room: the fossil fuel industry. Still, it is a crucial first step. The real test is what we'll make of it.

Marion Davis is a senior communications officer at the Stockholm Environment Institute, focused on climate change.

Adis Dzebo is a research fellow at the Stockholm Environment Institute and co-leader of the SEI Initiative on Climate Finance.