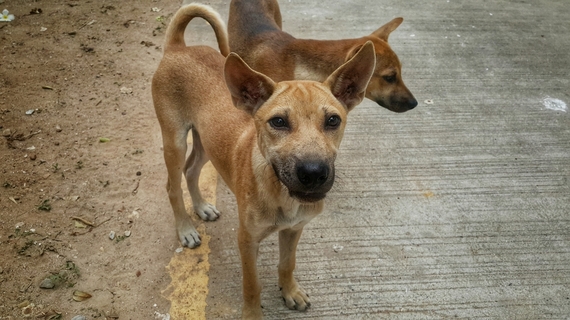 Every June, thousands of dogs are slaughtered for their meat in southwest China. They aren't consumed for their nutritional value or to stave off starvation. Rather, they're the main delicacy at the annual Lychee and Dog Meat Festival in Yulin, a city in Guangxi Province, for which an estimated 10,000 dogs are killed each year.

Unsurprisingly, this festival draws a lot of criticism, not just from animal welfare organizations, but from lots of regular folks who find eating companion animals cruel and appalling. More than 1 million people signed this petition asking the Chinese government to step in and stop the 2015 festival. Even a year after it was created, hundreds of people still sign it every day. In a world where an issue is lucky to get 15 minutes of fame, the enduring outrage and desire for change shows there's plenty of passion that could be harnessed to put an end to the cruelty.

The Yulin Dog Meat Festival is held each June and ostensibly celebrates the summer solstice. The way its defenders talk about it, you'd think the festival is an ancient tradition. In fact, the first festival was in 2009. While the Chinese and other nearby countries have consumed dog meat for generations (it was considered a delicacy during the Han Dynasty 1,800 years ago), the "tradition" of eating dog meat and drinking lychee liquor to celebrate summer only began in the 1990s.

Despite a long history of using dogs for food, dog meat festivals are losing popularity as more Chinese families keep them as pets. Still, keeping pet dogs is often considered elitist and has not wholly supplanted the idea of dogs as food. A 2014 editorial in the People's Daily railed against a "dog infestation" and in 2015, one province decided to kill its citizens' dogs in an effort to keep their region clean. Locals in Yulin often defend consuming dog meat as a cultural preference, akin to Americans' taste for turkey. Activists counter that the animals' treatment--from beating and butchering to being crammed in small cages to ensure dangerous transport-- makes Yulin particularly cruel. Worst of all, there's evidence that many of the dogs are stolen pets.

Making a difference from afar

The Yulin Dog Meat Festival burst onto the international community's radar in 2015 spurred by the #StopYulin2015 social media campaign, mobilizing celebrities like Ricky Gervais and Chinese pop stars Chen Kun and Yang Mi. The attention and awareness-building led the city to distance itself from the festival and downplay it as an informal activity among residents, rather than a state-sanctioned holiday. That's a big shift from their original stance that the event would be a tourism boon.

The work in 2015 was a great start, but with the 2016 festival still slated for June, there's more to be done. For those of us living many thousands of miles away, one of the best things we can do is continue to raise awareness through social and traditional media. Petitions are one of the best tactics: they're easy to share in online networks, give people a concrete way to make a difference, and, with a strong enough groundswell of support, make news that demands coverage. Educating people about an issue is a critical first step and mobilizing them into supporters builds a movement.

There's a history of success in drawing attention to animal welfare across the world and in China. Years of work mobilized thousands of petition signatures called for an end to bear bile farming, a cruel industry that harvests bear bile, an ingredient in traditional Chinese medicine. In 2012 the International Union for the Conservation of Nature passed a motion to end it. Two years later, a large pharmaceutical company announced it would work toward a synthetic alternative.

We've already seen the power of awareness-building when it comes to Yulin. In addition to weakening official support for the festival, some reports argue that last year's viral campaign resulted in fewer dogs killed. These publicity tactics don't just convey ideas to the people in charge, they can embarrass them or force them to address an issue, rather than just sweeping it under the rug.

Forcing change on the ground

Last year, Chinese activists with help from Humane Society International (HSI) saved an estimated 1,400 dogs on their way to Yulin in just a week and a half. The year before, local activists again successfully saved thousands of dogs headed for slaughterhouses.

Activists also engage in direct action to take the sentiment expressed online and in petitions directly to the Yulin community. One hundred thousand local activists protested the festival in Yulin in 2014. The following year, HSI and Chinese animal welfare organizations led a 50-city protest campaign across China. You don't have to be in China to participate. Hundreds gathered outside the Chinese embassies in London and Dublin in June 2015 to protest.

This work not only saves individual animals, but makes the logistics of hosting the festival more difficult and expensive. With enough pressure, the scales tip and holding the festival is no longer worth the trouble. And for those of us unable to travel to China, we can support the people and organizations on the ground with donations both for saving dogs and contributing to their care post-rescue (another huge challenge).

Taken together, these coordinated campaigns with online and on-the-ground action can be highly effective. In 2011, another dog meat festival in Jinhua was canceled amid international outcry driven by online activism. Unlike Yulin, the Jinhua was a 600-year-old festival that commemorated a major battle win, supposedly by killing the city's dogs to preserve the element of surprise. Winning there proves compassion for animals can overcome tradition. You can participate this year to repeat the success in Jinhua, by using the #StopYulin hashtag and sharing information and opportunities for action with your networks.

Look at the big picture

The Yulin festival is a particularly visible and dramatic example of the lack of animal protection in China. The country's first animal welfare legislation wasn't proposed until 2009, and it failed to pass. In 2014, an update to their country's wildlife protection law recognized "animal welfare" for the first time, but that still doesn't apply to farm or pet animals.

Until Chinese law gets a makeover, dogs won't be safe from Yulin and other instances where they're treated like food, not friends. Real change will require not only codifying restrictions on animal cruelty, but also tackling the dog meat trade, which, according to a multiyear investigation by Animals Asia, relies on pets and strays. In addition to national laws, local authorities will need help dealing with strays and curbing the theft of family pets. Underlying this is the need for cultural change that values dogs as more than a meal.

The good news is that change is already in the air. As of March 2016, more than 8 million Chinese citizens voiced their support for banning the dog meat industry. Animal activism is growing in the country focused not only on pet welfare, but ending bear bile farming and ending abuse in zoos. The key will be keeping up the pressure, both locally and abroad, online and on the ground to ensure that someday soon, no dogs will be killed for dinner.

Joe Baker is the Vice President of Editorial and Advocacy for Care2 and ThePetitionSite. He is responsible for recruitment campaigns for nonprofit partners, membership growth efforts and all editorial content. Prior to Care2, Joe was the Executive Director of N-TEN. Joe serves on the Board of Directors of Death Penalty Focus, the Advisory Board of GiveForward and volunteers for the Sierra Club and Amnesty International.