Editor's note: The following is excerpted from "Beyond Religion" by His Holiness the Dalai Lama. Reproduced by permission of Houghton Mifflin Harcourt. All rights reserved.

I am an old man now. I was born in 1935 in a small village in northeastern Tibet. For reasons beyond my control, I have lived most of my adult life as a stateless refugee in India, which has been my second home for over 50 years. I often joke that I am India’s longest-staying guest. In common with other people of my age, I have witnessed many of the dramatic events that have shaped the world we live in. Since the late 1960s, I have also traveled a great deal, and have had the honor to meet people from many different backgrounds: not just presidents and prime ministers, kings and queens, and leaders from all the world’s great religious traditions, but also a great number of ordinary people from all walks of life.

Looking back over the past decades, I find many reasons to rejoice. Through advances in medical science, deadly diseases have been eradicated. Millions of people have been lifted from poverty and have gained access to modern education and health care. We have a universal declaration of human rights, and awareness of the importance of such rights has grown tremendously. As a result, the ideals of freedom and democracy have spread around the world, and there is increasing recognition of the oneness of humanity. There is also growing awareness of the importance of a healthy environment. In very many ways, the last half-century or so has been one of progress and positive change.

At the same time, despite tremendous advances in so many fields, there is still great suffering, and humanity continues to face enormous difficulties and problems. While in the more affluent parts of the world people enjoy lifestyles of high consumption, there remain countless millions whose basic needs are not met. With the end of the Cold War, the threat of global nuclear destruction has receded, but many continue to endure the sufferings and tragedy of armed conflict. In many areas, too, people are having to deal with environmental problems and, with these, threats to their livelihood and worse. At the same time, many others are struggling to get by in the face of inequality, corruption and injustice.

These problems are not limited to the developing world. In the richer countries, too, there are many difficulties, including widespread social problems: alcoholism, drug abuse, domestic violence, family breakdown. People are worried about their children, about their education and what the world holds in store for them. Now, too, we have to recognize the possibility that human activity is damaging our planet beyond a point of no return, a threat which creates further fear. And all the pressures of modern life bring with them stress, anxiety, depression, and, increasingly, loneliness. As a result, everywhere I go, people are complaining. Even I find myself complaining from time to time!

It is clear that something is seriously lacking in the way we humans are going about things. But what is it that we lack? The fundamental problem, I believe, is that at every level we are giving too much attention to the external material aspects of life while neglecting moral ethics and inner values.

By inner values I mean the qualities that we all appreciate in others, and toward which we all have a natural instinct, bequeathed by our biological nature as animals that survive and thrive only in an environment of concern, affection and warmheartedness -- or in a single word, compassion. The essence of compassion is a desire to alleviate the suffering of others and to promote their well-being.

This is the spiritual principle from which all other positive inner values emerge. We all appreciate in others the inner qualities of kindness, patience, tolerance, forgiveness and generosity, and in the same way we are all averse to displays of greed, malice, hatred and bigotry. So actively promoting the positive inner qualities of the human heart that arise from our core disposition toward compassion, and learning to combat our more destructive propensities, will be appreciated by all. And the first beneficiaries of such a strengthening of our inner values will, no doubt, be ourselves. Our inner lives are something we ignore at our own peril, and many of the greatest problems we face in today’s world are the result of such neglect.

Not long ago I visited Orissa, a region in eastern India. The poverty in this part of the country, especially among tribal people, has recently led to growing conflict and insurgency. I met with a member of parliament from the region and discussed these issues. From him I gathered that there are a number legal mechanisms and well-funded government projects already in place aimed at protecting the rights of tribal people and even giving them material assistance. The problem, he said, was that the funds provided by the government were not reaching those they were intended to help. When such projects are subverted by corruption, inefficiency and irresponsibility on the part of those charged with implementing them, they become worthless.

This example shows very clearly that even when a system is sound, its effectiveness depends on the way it is used. Ultimately, any system, any set of laws or procedures, can only be as effective as the individuals responsible for its implementation. If, owing to failures of personal integrity, a good system is misused, it can easily become a source of harm rather than a source of benefit. This is a general truth which applies to all fields of human activity, even religion. Though religion certainly has the potential to help people lead meaningful and happy lives, it too, when misused, can become a source of conflict and division. Similarly, in the fields of commerce and finance, the systems themselves may be sound, but if the people using them are unscrupulous and driven by self-serving greed, the benefits of those systems will be undermined. Unfortunately, we see this happening in many kinds of human activities: even in international sports, where corruption threatens the very notion of fair play.

Of course, many discerning people are aware of these problems and are working sincerely to redress them from within their own areas of expertise. Politicians, civil servants, lawyers, educators, environmentalists, activists and so on -- people from all sides are already engaged in this effort. This is very good so far as it goes, but the fact is, we will never solve our problems simply by instituting new laws and regulations. Ultimately, the source of our problems lies at the level of the individual. If people lack moral values and integrity, no system of laws and regulations will be adequate. So long as people give priority to material values, then injustice, inequity, intolerance and greed -- all the outward manifestations of neglect of inner values -- will persist.

So what are we to do? Where are we to turn for help? Science, for all the benefits it has brought to our external world, has not yet provided scientific grounding for the development of the foundations of personal integrity -- the basic inner human values that we appreciate in others and would do well to promote in ourselves. Perhaps we should seek inner values from religion, as people have done for millennia? Certainly religion has helped millions of people in the past, helps millions today and will continue to help millions in the future. But for all its benefits in offering moral guidance and meaning in life, in today’s secular world religion alone is no longer adequate as a basis for ethics. One reason for this is that many people in the world no longer follow any particular religion. Another reason is that, as the peoples of the world become ever more closely interconnected in an age of globalization and in multicultural societies, ethics based in any one religion would only appeal to some of us; it would not be meaningful for all. In the past, when peoples lived in relative isolation from one another -- as we Tibetans lived quite happily for many centuries behind our wall of mountains -- the fact that groups pursued their own religiously based approaches to ethics posed no difficulties. Today, however, any religion-based answer to the problem of our neglect of inner values can never be universal, and so will be inadequate. What we need today is an approach to ethics which makes no recourse to religion and can be equally acceptable to those with faith and those without: a secular ethics.

This statement may seem strange coming from someone who from a very early age has lived as a monk in robes. Yet I see no contradiction here. My faith enjoins me to strive for the welfare and benefit of all sentient beings, and reaching out beyond my own tradition, to those of other religions and those of none, is entirely in keeping with this.

I am confident that it is both possible and worthwhile to attempt a new secular approach to universal ethics. My confidence comes from my conviction that all of us, all human beings, are basically inclined or disposed toward what we perceive to be good. Whatever we do, we do because we think it will be of some benefit. At the same time, we all appreciate the kindness of others. We are all, by nature, oriented toward the basic human values of love and compassion. We all prefer the love of others to their hatred. We all prefer others’ generosity to their meanness. And who among us does not prefer tolerance, respect and forgiveness of our failings to bigotry, disrespect and resentment?

In view of this, I am of the firm opinion that we have within our grasp a way, and a means, to ground inner values without contradicting any religion and yet, crucially, without depending on religion. The development and practice of this new system of ethics is what I propose to elaborate in the course of this book. It is my hope that doing so will help to promote understanding of the need for ethical awareness and inner values in this age of excessive materialism.

At the outset I should make it clear that my intention is not to dictate moral values. Doing that would be of no benefit. To try to impose moral principles from outside, to impose them, as it were, by command, can never be effective. Instead, I call for each of us to come to our own understanding of the importance of inner values. For it is these inner values which are the source of both an ethically harmonious world and the individual peace of mind, confidence and happiness we all seek. Of course, all the world’s major religions, with their emphasis on love, compassion, patience, tolerance and forgiveness, can and do promote inner values. But the reality of the world today is that grounding ethics in religion is no longer adequate. This is why I believe the time has come to find a way of thinking about spirituality and ethics that is beyond religion.

PHOTO GALLERY
The Dalai Lama Beyond Religion
Download
Calling all HuffPost superfans!
Sign up for membership to become a founding member and help shape HuffPost's next chapter
Join HuffPost 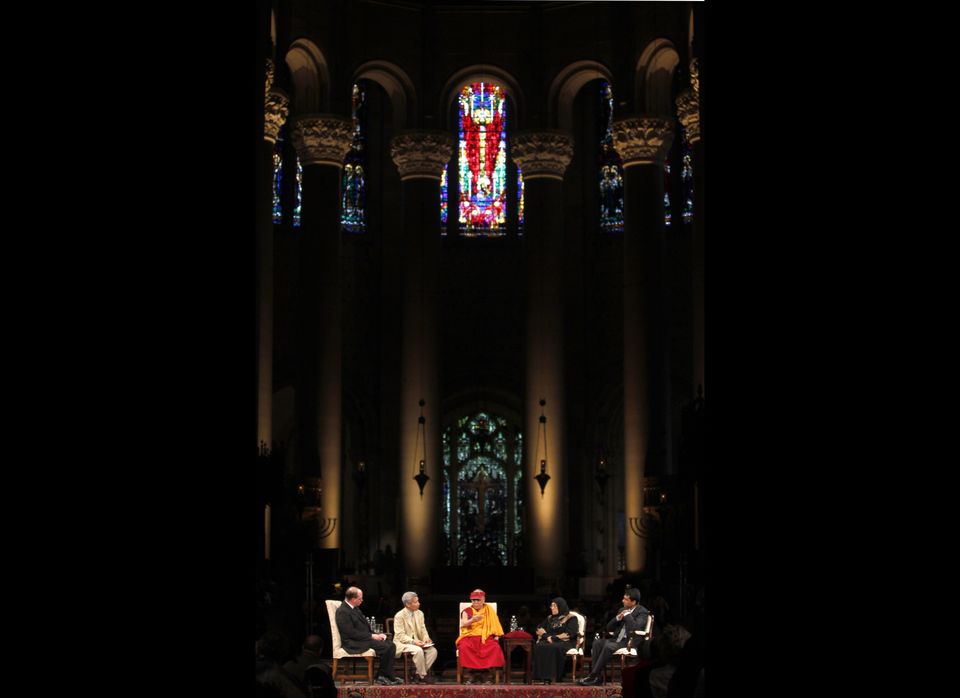