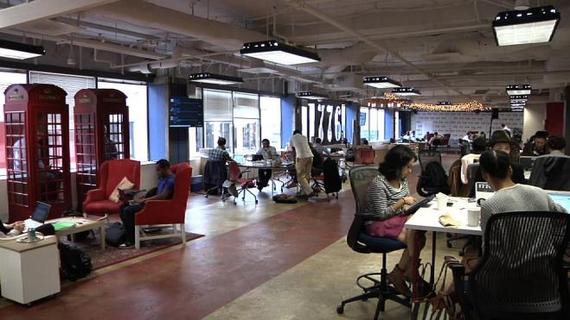 But increasingly, there's a new disruptive player fighting for the corner booth at The Source -- startups.

In April, Fast Company magazine reported that D.C. is number 1 in startups per million residents, more than any other state in the country. The Washington Business Journal noted that the District, Maryland and Virginia are home to just under 1,000 startups.

D.C. used to be a company town and that company was the federal government. But as cities such as Detroit are now figuring out, to thrive, you have to diversify.

"The District and our region have historically depended on the strength of the federal government to create jobs and occupy buildings. But, in an age of federal budget uncertainty, we can't rely on that anymore. For the District to keep growing and prospering, we -- much like a startup -- must pivot to new sources of success," D.C. Mayor Vince Gray recently said.

The city is putting its words into action, releasing a Five-Year Economic Development Strategy -- the first such plan of its kind in the District's history. Entrepreneurship and tech-sector development are cornerstones of that strategy. It calls for the creation of the largest technology center on the East Coast. Overall, D.C. aims to create 100,000 new jobs and generate $1 billion in new tax revenue for the District within the next five years by following this strategy. Twenty thousand of those jobs will be in the tech sector.

"It's always helpful to have a tech champion in the mayor himself," says Tegene Baharu, Deputy Chief Technology Officer for the D.C. Government. "Mayor Gray is a very receptive mayor but there's only so much you can do in a four year term."

Startups in D.C. are a bit of a no brainer -- the city offers quite a few competitive advantages, including the power trio of brains, money, and influence. Bethesda and Potomac, Maryland were recently included in NerdWallet's top 10 list of the most educated communities in the America.

A large number of major universities are creating tens of thousands of bright undergraduate and graduate students. The Washington, D.C. area now has four of the five richest counties in the nation, according to a recent article in the Huffington Post, and is home to venture capitalists such as former AOL execs Steve Case and Ted Leonsis (their Revolution venture fund helped LivingSocial and ZipCar get their starts).

"There are a tremendous number of assets and resources that the greater Washington region has that have never really been tapped into before on behalf of startups," says Evan Burfield, tech entrepreneur and co-founder of D.C. incubator, 1776. "While we've always had some activity in the region, it's always been in some way kind of separate or disconnected from the core business of Washington."

It's also a place where entrepreneurs don't compete, they complement. I saw this firsthand during 1776's D.C. Challenge Cup competition. I was attending a mentoring roundtable session for competitors in the smart cities category. Baharu was particularly interested in health care startup, Ostendio, which is sort of a middle man for small and medium sized businesses trying to manage risk and be HIPAA compliant, federal privacy rules under the Health Insurance Portability Act. Baharu's office manages the IT platforms for 65 of the area's health clinics. Another startup founder immediately began playing matchmaker, encouraging Baharu to use Ostendio's platform.

The deal looked pretty promising. "It's hard to find a small security team or startup so aware of HIPAA compliance and policies and that's building a tool for that," Baharu said. "I'm always looking for smart people to help our city run better."

"I've been involved in the D.C. startup community for a quite a while and part of what I love is how incredibly collaborative it is," says Burfield. "This tends to be true of startup ecosystems in cities around the world, but really here in D.C. it is amazing to watch how much people cheer for each others' successes, how much people are willing to give of their time and mentor, how much people are willing to support each other in all of the different ways they need support and it's one of the things I find most fulfilling about getting to work in this area."

Can Washington D.C. shed its suit-and-tie image and become the epicenter of innovation? Only if it can learn to speak the same language, Burfield says. "It's a fairly fragmented region. Everybody tends to think of D.C. as inside the Beltway, on the assumption that it's one city, when in fact you have D.C., Virginia, Maryland, and the different counties, and very different networks. K Street tends to operate in one world, which is very different from where the startups tend to operate, which is different from where the media tends to operate, which is different from the embassy crowd. So figuring out how we bring together people from all these fragmented worlds and get them all focused on innovation is one of the big challenges we see in helping DC reach its full potential."

D.C. is ready, says Emeka Moneme, a former staffer to ex-Mayor Adrian Fenty, and Deputy Executive Director of the Federal City Council, a non-profit, non-partisan organization dedicated to the improvement of D.C. "We really struggled for many years financially and social economically. But we're getting our legs back, and there's a new spirit in the city."