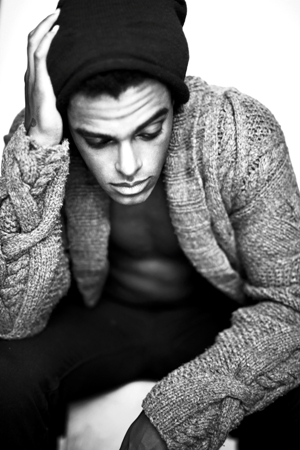 With his family history, it would be too easy to say that the choice for Austin Brown to pursue music as a career was as "easy as 1, 2, 3." The son of Rebbie Jackson and Nathaniel Brown, Brown's own career is starting off strong.

His debut album is being released this year by The Royal Factory, an independent record label Brown cofounded after listening to some advice from his uncle Michael -- Jackson, that is.

Although he loves his family, Brown is determined to be considered as a serious artist in his own right. He told me that he finds it vital that "people actually listen to me instead of listening to the next generation Jackson or because I'm Michael Jackson's nephew. That's all. Just listen. And if you like it, cool. And if you don't, I'll get you the next time."

Rivera:Austin, there's so much competition out there in the music scene. What makes your music different?

Brown: Well, I have two producing partners. We all have producing background. I started producing when I was 13. Tommy's been producing for years, and he's produced songs for Janet and Britney Spears. And Scott's just another amazing producer. We all are fans of music. So, when we really look at a song, and we really look at a theme for it - Like "Menage a Trois", we really wanted to go into something that felt like Motown. It's us paying homage to all of our heroes and trying to interpret music the way we see it in our humble opinion, and saying, "thank you" to those guys who really paved the way for us.

Rivera: Yeah. "Menage a Trois" reminded me of a Motown record.
Brown: Yeah. We were listening to "Bernadette" non-stop from the Four Tops. And it was such a cool, unique, fun sound. So we thought, how can we bring it to our generation to make them love it the same way we do? And that's our quest. And I think when you look at all musical heroes, in a sense, they've all kind of done that in the sense, paid homage to their heroes in the way really creating their own sound, and they've inspired us in the same way.

Rivera: Well, it's interesting that title - Let's talk about the title of it because your family - some of your family is very conservative.

Rivera: Exactly. Let's talk a little about your song writing process. How does it go from an idea to something that we can hear on iTunes?

Brown: Well, it's funny. That's why I love being able to work with my partners because we all come up with different ideas. Like, Tommy might come up with the full idea of song and lyrics. And then, he'll bring it to us, and we'll say, "Well, let's try this. Let's try that." Or maybe I'll come up with the chord structure on my guitar and sing melodies. And then, we'll go into the studio, and be like, "What can we do for this?"

Rivera: How would you say that breaking into business is different now than maybe it would have been five years ago?
Brown: Completely different. It's better now because you have more control because of social media. You can have direct contact with your fans. You can put on shows. You can promote them with those tools we didn't have before. You had to go through mailing list before. Social media has been one of the biggest things for me.

Rivera: What made you think not to add your family's name to your stage name?

Brown: Because it's not my last name.

Rivera: Yeah, but you could have easily added it and been Austin Brown-Jackson or Austin Jackson-Brown.

Brown: Yeah but I mean, in a sense my family name is a blessing because I'm fortunate enough to be a part of the family who's accomplished amazing things. But at the same time, it's important for people to get to know me and not really think about only the Jackson thing. I really, really, really love music with all my heart and soul. I, like everyone else, was influenced by my family musically. I think they still do phenomenal work.

Rivera: Right. What do you think though is one of the common misconceptions about your family?

Brown: A lot. I mean, that - I think people have a perception that my family is out there and weird and have drama. But every family has drama. Every family does. It's just you don't know about it. And don't get me wrong. There's been our fair share. I just wish people knew the real side of the family, how much love and passion we have for what we do. In a sense, it really is normal. It's not as out there as what people as may feel. And maybe they will never get that, and it's okay.

Rivera: What would you say is your greatest challenge as a musician today in terms of taking your career to the level?
Brown: A couple of things - deciding where I want to go next musically because there are so many options. And then, at the same time, tackling it the right way. Getting people to actually listen to me instead of just seeing me as the next generation Jackson or a Michael Jackson's nephew. Just listen to my music. If you like it, cool. And if you don't, I'll get you the next time.

To take a look at his latest video click here: http://www.vevo.com/artist/austin-brown?source=instantsearch&orderbyrecent=true