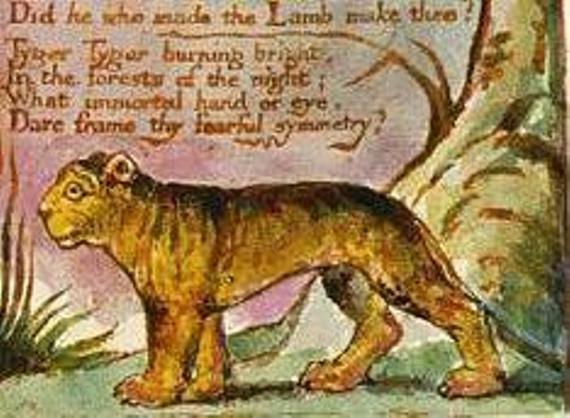 Though these definitions of poets and poetry are correct as far as they go, they do not go far enough. Poets are artists of the intentional; they are artists using signs that point to things beyond the signs themselves. Since words are not the only signs, why should poets limit themselves to words? Using C.S. Peirce's terminology, there are in fact three kinds of signs: symbols (arbitrary signifiers such as words), icons (signifiers such as paintings that resemble what they signify), and indexes (signifiers like photographs or weathervanes that participate in what they signify). In the realm of symbols, why should poets limit themselves to words? In the broader realm of signs, why should poets ignore icons and indexes? They should not of course, and William Blake gives us excellent proof.

Though one can read only the words of Blake's illuminated poems, such a reading is much impoverished. Take for example his famous poem "The Tiger." The words of the poem raise troubling questions of good, of evil, and of the character and even unity of God. How could the same, virtuous God create the gentle lamb and the ferocious tiger? Don't our questions in words drive us to awful conclusions: either the one God is responsible for pain, suffering, and carnage or perhaps there are two combatting Gods--one of the lamb and one of the tiger? Though words may drive us here, Blake's poetry is greater than words. It also includes his icons such as the rendering of the tiger itself. The renderings change in different versions but when compared to the words the tiger icon can be quite docile and even dwarfed by a mere tree: 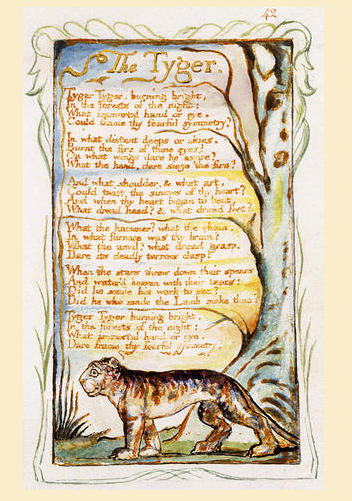 The "contradiction" between iconic and symbolic signs is of course no accident. As a great poet, Blake would not be chained by words alone. With his incongruous icons he reminds us that tigers and trees are what they are apart from how our words might construe them. Such brilliant juxtaposition of symbols and icons should take the reader's breath away.

In case the reader thinks Blake's tiger is simply the result of Blake's inability to portray horror, I insert just one plate below from his First Book of Urizen to dispel any such notion. Iconic displays of the horrific were well within Blake's powers. 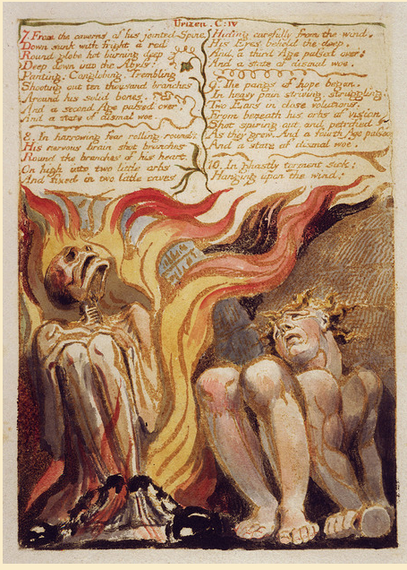 Blake's iconic abilities of course were unique but this does not excuse other poets from working beyond words as symbols. Words can be used as icons as in George Herbert's "The Altar" and "Easter Wings 1 & 2." There are in fact endless ways form, meter, and rhyme can picture and participate in a poem's subject. Dante's terza rima, for example, both pictures the Trinity and participates in its "three-ness."

This brings me back where I began: poets are artists of the intentional; they are artists using signs that point to things beyond the signs themselves. As such, they should push the bounds of semiotics and explore iconic and indexical art as well as verbal and other symbolic art. Readers who wish to explore more of Blake's efforts here have a vast universe at their disposal at the magnificent and exhaustive online William Blake Archive.