My friend Bonnie decided she didn't want to be my friend anymore. Now all my friends are hanging out with her. I don't know why she's mad at me, but she ignores me when I say her name. - Rebecca, 13, Texas

Those few weeks when I didn't know why my friends weren't talking to me, why they were purposefully filling up the lunch table before I came, were the worst. They'd say to each other, 'Remember last Saturday when we went to the mall together? Wasn't that great? Have you used your new perfume?' Except I hadn't gotten the invitation. It was like, 'Wow, they've always liked me. What did I do?' - Sara, 12, Florida

If you've bypassed major friendship trouble -- you've had a solid group of friends throughout childhood and into high school; a best friend hasn't dropped you, betrayed you, or iced you out -- you're super lucky. While we all experience friend issues (and they don't go away completely when you hit adulthood!), for most girls, middle school is the time when the highs and lows of the friendship rollercoaster are most pronounced. 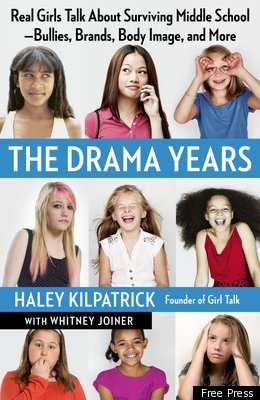 "
Why are strong friendships so hard to find -- and keep -- during those years? And why is it so tough to be a middle school girl, anyway? That's the question that's driven me and Haley Kilpatrick, the founder of national peer-mentoring non-profit Girl Talk, over the last few years, as we've worked on our book
The Drama Years: Real Girls Talk About Surviving Middle School - Bullies, Brands, Body Image, and More
, just out by Free Press (a division of Simon & Schuster). We interviewed a community of 50+ girls, both tweens and teens, about everything they're going through, or went through, in middle school -- from academic pressure to bullying, from competition with friends to burgeoning sexual feelings, and analyzed what we found for
The Drama Years
.

We all know that middle school can be super uncomfortable and awkward. Your body's changing, your hormones are going bananas, you're hoping you'll get through puberty intact. But those years aren't just a period of growth spurts -- they're also a soap opera. If you ask a tween girl about her life -- her school, her friendships, her classmates -- she'll almost always use the word "drama." And when girls talk about the "drama" in their school, it's often related to their relationships with other girls. Two girls who've been best friends their entire lives suddenly hate each other, or become frenemies, and neither one knows who she can trust.

All that puberty-driven change is partly to blame. During middle school, girls are living within a perfect storm of self-consciousness: there's so much change happening at once -- biological, social, emotional, psychological -- and they're suddenly so aware of it. And since most girls this age consider their friendships a top priority (which makes sense: middle school is when girls have left the confines of their family, but aren't yet deeply involved in romantic relationships), when those friendships shift and change, fall apart and reassemble, it can feel like their world has turned upside down.

Life often feels much less stable in middle school than it did during elementary school, so these breakups and fights can hurt that much more, because they're rocking already-shaky ground. And while girls might not be completely aware of it, they're often trying as hard as they can to find some semblance of stability -- which can manifest as freaking out about friendships. Thirteen-year-old Jessie in Georgia explains it this way: "The drama is pretty prominent in your thoughts, because it's like, if that doesn't work out, who's to say your other friendships will work out? That something won't happen between your parents, say? Who's to say that everything won't crash because one thing crashed?"

One thing Haley's found in her work at Girl Talk is that a slightly-older mentor--that is, a high school girl who's just been there, and can relate--can do wonders for a middle schooler's attempts to handle her drama. All the high schoolers we interviewed for The Drama Years serve as mentors to younger girls; for them, serving as an adopted older sister to a younger girl ended up helping them process their own middle school drama. It's a win-win situation. Maybe it's a younger cousin, a neighbor, or someone at your school, but there's probably a middle schooler in your life who could use an older girl's shoulder to lean on--and I'll bet that being there for her will end up healing whatever sore spots you might have from your own friend drama.

So tell us, how did you get through it? What advice would you give a younger girl surviving intense friend drama? Share your thoughts in the comments below.