When Claire Thomsen was 11, her parents pulled the rug out from her comfortable Malibu existence. They sold the family business, rented out the house, and spent the year roving the world, 27 countries in all, with Claire in tow. Instead of entering middle school with friends, flinging with fashions, immersing in social media, and generally avoiding adulthood, Claire spent sixth grade girdling the globe, homeschooling from eco-lodges and hotels through correspondence courses.

She found delight and insight in many countries over the course of the year, including China, Japan, Thailand, Egypt, Greece, Turkey, Cambodia, France and Italy. But one tiny, remote Himalayan kingdom -- Bhutan -- remained lodged in her consciousness and heart. 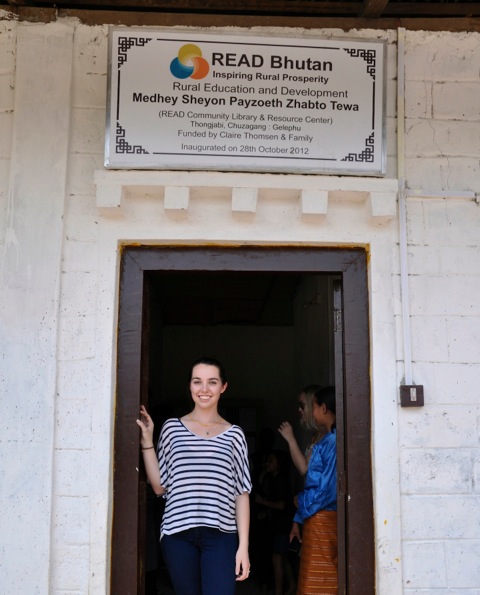 After returning to Los Angeles and finishing seventh grade, Claire attended a party in honor of Public Radio reporter Lisa Napoli, author of Radio Shangri-La, a riveting book about setting up radio stations in Bhutan. Claire had many questions about the challenges of bringing novel communication to Bhutan, and Lisa saw in Claire a kindred spirit. So, Lisa introduced Claire to local Bhutanese friends, and to the Bay Area-based charity, Read Global, which builds community library and resource centers as vehicles for social and economic transformation.

For months afterwards Claire wondered how she might make a difference in Bhutan, which despite its abundance of mountain scenery, Buddhist temples, and warm, ready smiles, has less than a 50 percent literacy rate, and ranks 140 out of 186 in the global Human Development Index. Given its lack of roads, infrastructure, power, schools, and general shortage of materials, most ambitious improvement ideas are dead before arrival. She thought perhaps she could send a shipment of art and school supplies, but heard that very often freight doesn't reach intended recipients. Then Read Global suggested she build a library, as most rural Bhutanese have little if any access to books. It seemed a crazy idea, but she was intrigued.

Claire needed to raise $50,000 dollars to build a library. She started passing the hat among friends and family, and held fundraisers in and around her hometown of Malibu. After a flush of early giving -- $5,000 on her first go-around, and $10,000 more after she made a YouTube video -- the going got tougher. She found it hard to find new people to ask, and harder to go back and ask original givers for more.

Stalling out at $25,000, after almost a year of appeals and events, Read Global, impressed by Claire's passion and commitment, decided to step in and begin the project, even with the shortage of funds. But then after Claire showed her donors photos of the building taking shape, they were more willing to open pocketbooks, and the goal inched closer. The actress Linda Hamilton graciously donated the use of her home for a fundraiser, and made one of the largest financial donations to the library. The $50,000 target was reached several months ahead of the scheduled three-year mark.

The library was completed last fall, and this past spring Claire traveled to Bhutan to see the results. On the last hairpin turn of the 10-hour bus ride to the remote village of Chuzagang in Southern Bhutan, Claire found 40 adults lined up, waving a welcome, as the children beside sang and danced. They were the happiest people on earth.

The library has 3,000 books, a computer room, a television, a children's play area, and a women's hall, where Claire and the other teenagers sang Taylor Swift and Justin Bieber songs. "I probably had a two-minute period where I wasn't crying," she says. "It was crazy."

After committing to the idea, it took two years for Claire to reach her goal. "I hope my example will inspire other people, other kids," Claire says. "Fundraising and Bhutan will always be a part of my life now, and it's really changed me. I hope this project will inspire other kids to volunteer somewhere and help out those less fortunate. It's really a life-changing experience, for all involved. And you can't imagine how much joy it brings." 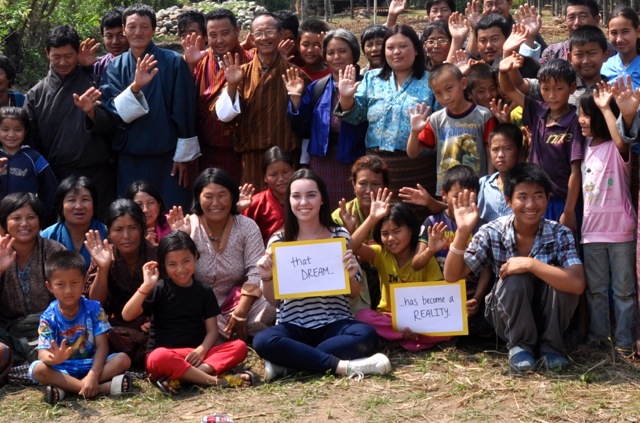