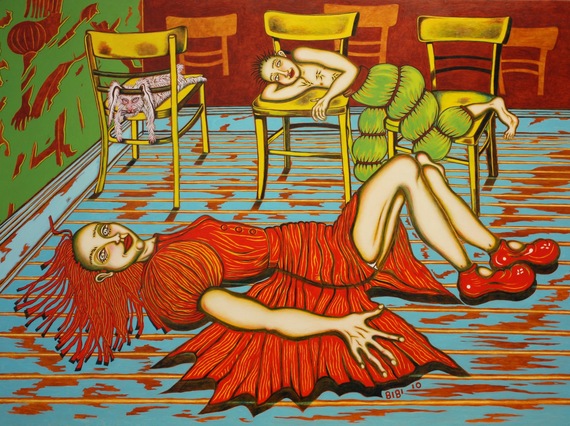 Bibi Davidson: On the Floor

And this is one of the major questions of our lives: how we keep boundaries, what permission we have to cross boundaries, and how we do so. --Abraham B. Yehoshua

After 30 years of painting in private, almost in secret, Bibi Davidson found the confidence to proclaim that she is and always has been an artist. Along with this ownership of her exuberantly eccentric imagination came a few recent years of prolific output and decisive evolution in style and technique. As her palette grew bolder, she made forays into sculptural assemblage and installation and her hyper-stylization intensified. At a certain point, Davidson became equally interested in expanding her formal range as she had been in mapping her inner world. Currently she's exploring the effects of introducing 3-dimensional elements directly into her paintings. 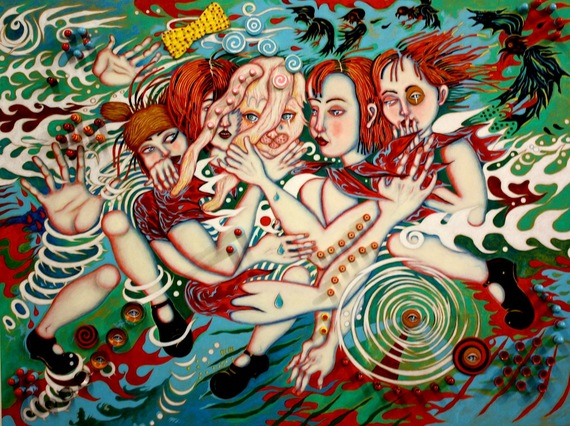 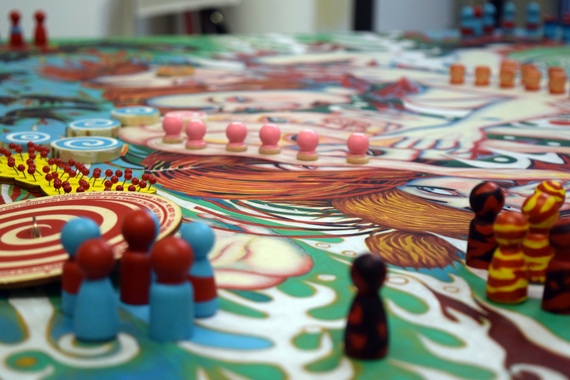 Davidson's unmistakable aesthetic favors saturated colors and thick line-drawing evoking stained glass, graphic novels, and folkloric fairy-tales. She balances competing impulses toward abstraction and narrative, resolving precisely detailed rendering and emotionally charged gesture in exaggerated features, fantastical landscapes, and anthropomorphic creatures. Compressed pictorial spaces and self-evidently allegorical characters speak to her storyteller's perspective, and her compositional strategy can be a lot like blocking a stage scene, deployed among and contained within its own elements. 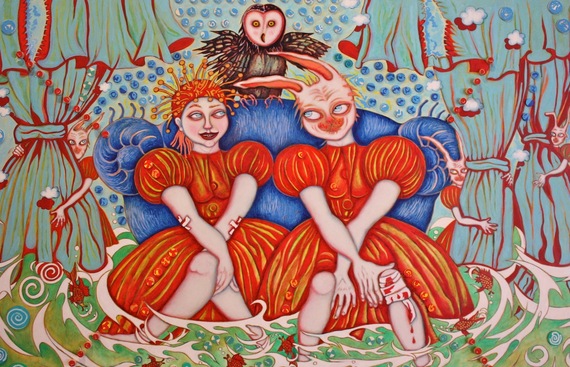 Her recent experiments with introducing 3D elements into 2D space is also a question of how, how much, and when to translate her signature high-gloss graphic style into more sculptural moments, as well as question of by what means. Part of her resolution of the paradox of imagery and abstraction has involved pattern and adornment -- landscape elements especially are often ornately strewn with repeating shapes and distorted motifs. Including these kinds of passages in the form of applied objects (wooden dowels, nails, buttons) rather than by disruptive turns at impasto has been a pictorial solution that is also a formal breakthrough, like micro-Schnabels approaching physically broken surfaces as a literal new dimension adding life to abstraction. Davidson's spatial interventions add to the story, enhancing the immediacy of the image's presence without distracting from the emotional and symbolic content of her scenes. 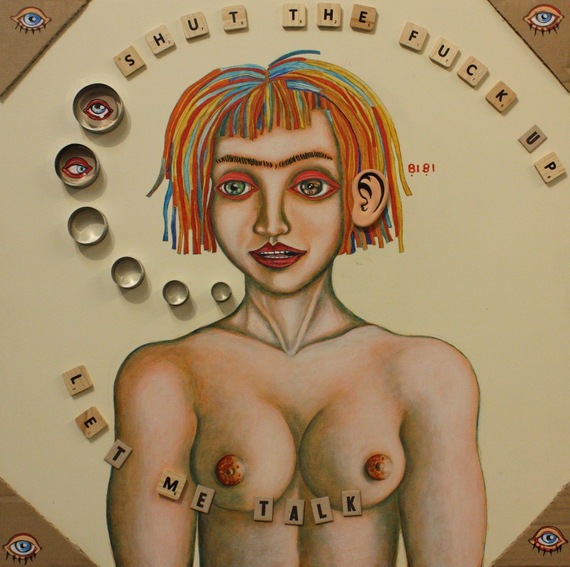 Bibi Davidson: No Gender: Shut the Fuck Up

Davidson confesses that she'd always opened up in the work instead of in the world, saying, "If I can't talk about it, I paint it." This partly explains the sense that all of her work inhabits the same alternative, parallel, through-the-looking-glass universe with a coherent dream logic. But it also gives rise to sparkling elements of humor she embraces when the autobiographical, interpersonal and more broadly social commentary in her work gets serious. The brilliant triptych No Gender, comprised of Shut the Fuck Up, I Dare You to Kiss Me, and See Me (No Boobs), will be shown as part of Fantastic Feminist Figuration at Groundspace this September, inspired the show's co-curator Betty Ann Brown to note that, "Bibi Davidson's strange comedic images are surreal commentaries on identity, particularly the increasingly permeable boundaries of gender identity. Remarkable technical skills underscores her powerful and always fantastical content."

Bibi Davidson: No Gender: I Dare You to Kiss Me

Davidson's perspective on identity comes through a filter of eccentricity and what used to be called character, celebrating the choice to be strange, to be different, to be your own other. "Besides," she says of a work depicting a man with three wives, "every woman is already at least three women. Gender roles are a casualty of gender fluidity, that's a good thing but it's confusing, and it's a lot of pressure because now everyone has to make their own choices, and that means being honest with yourself." This is the principle clearly at work in her studio -- and while a range of options may indeed be a mixed blessing, for Davidson the choices she's making now are among the most meaningful and honest of her life and career. 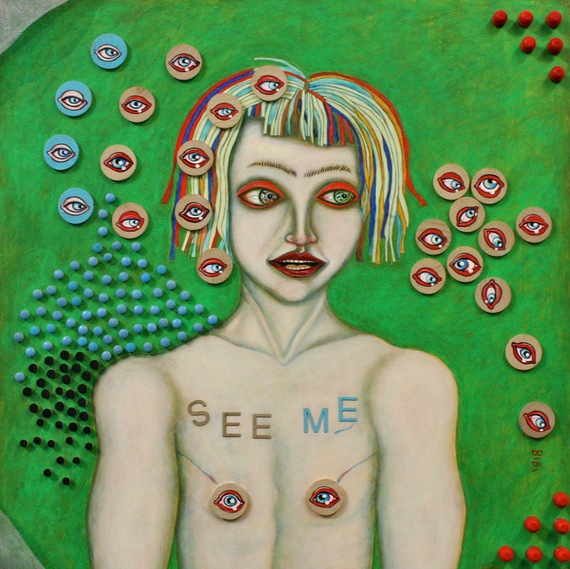 Bibi Davidson: No Gender: See Me (No Boobs)

The Girl in the Red Dress solo show opens October 15 at LAAA/Gallery 825.

Keep up with Davidson at her Facebook Page. And enjoy this short film on the artist by Eric Minh Swenson. 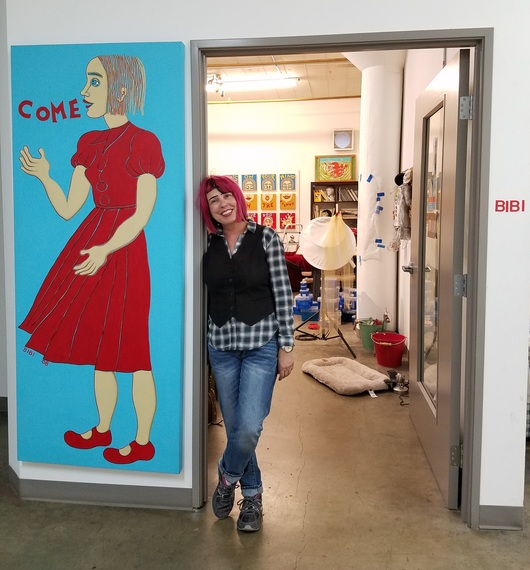