I'm sure Jeffrey Goldberg got it right. Whatever the reason the president leaked his unhappiness with Bibi to Goldberg just a few days before the Israeli election -- whether in an effort to influence the vote against Bibi, serve payback to Bibi for a perceived preference for Romney, or because the president could simply no longer suppress his dissatisfaction -- it must indeed be unnerving to be the most powerful man on earth and have the elected leader of a tiny Middle Eastern country defy you. Especially when that country, in your opinion, owes you so much! You are their only reliable friend who watches helplessly as that little nation continues to isolate itself through its self-destructive policies. According to Goldberg, Obama "has become inured to what he sees as self-defeating policies of his Israeli counterpart. ... Obama said privately and repeatedly, 'Israel doesn't know what its own best interests are'... Netanyahu is moving his country down a path toward near-total isolation." If only Israel would recognize the president's genius. If only it would stop building in Jerusalem and E1 and allow the president to sprinkle his magic peace dust, then Hamas would beat its rockets into ploughshares and Hezbollah would turn its bombs into pruning hooks. But no. Ungrateful to the last, Bibi insists on disobeying the president and claiming all of Jerusalem as Israel's undivided capitol. No doubt the president is likewise mystified at the Israeli people as well. How could the polls show that they will this week reelect the intransigent prime minister who is doing so much to harm their country? The most powerful man on earth is reduced to watching from the sidelines and complaining to journalists that he knows how to protect Israel far better than the Israelis themselves. Such an ungrateful nation. And yet, perhaps the Israelis have finally figured out that they are a sovereign people whom, while immensely grateful to America for its friendship and support, are still best qualified to judge their security needs better than anyone else. Perhaps they have come to understand that another Democratic president named Bill Clinton, whom no one would argue has a sincere love of the Jewish people and a Jewish son-in-law, still pushed Israel into the Oslo agreements that left a thousand Israeli civilians blown to bits. Perhaps they have come to understand that if Chuck Hagel, President Obama's nominee for secretary of defense, was correct that, as a legislator from Nebraska he was "not an Israeli senator; I'm a United States senator," then the prime minister of Israel is the likewise the leader of the Jewish state who must put the security of the Israeli people even before a nod of approval from the president of the United States. Over the past four years Bibi has grown into one of Israel's greatest-ever leaders. The country is booming economically and in terms of security. Cranes dot the skyline of expanding Israeli cities, terror incidents are negligible compared to the Clinton era, and unlike the anemic American economy, Israel is humming along at about 4 percent annual growth. And if President Obama is right that, in spite of this prosperity, Israel is isolated in world opinion, then it is arguably no more so than it has been in the past, and, besides, what is better, a popular Israel riddled with dead Jews or an unpopular Israel filled with living ones? But what President Obama does not understand about Netanyahu is that the inflexibility he accuses him of is born not of a narrow-minded obstinacy but rather of a confident Jewish pride and deep-seated conviction that has been Bibi's lifelong hallmark. In my desire in 1990 to launch a robust response to anti-Israel speeches at the Oxford Union, I booked Netanyahu to lecture at the University. Bibi, just 41 years old, had already electrified the world as Israel's most capable defender at the UN. Bibi agreed to come with a single stipulation: "If I'm already making the trip, then work me like a horse." We obliged. We picked him up in a special branch police car and as we drove through the grandeur of Oxford's ancient center, he commented on the majesty of British academia and its incongruence with some of the petty anti-Israel sentiment that is often expressed within its halls. Arriving at St. Antony's College for a private forum with Oxford Middle East experts, Bibi put one foot on a chair and for the next 90 minutes held forth on the justice of Israel's cause, surrounded as it was by nation's sworn to its destruction. As he finished, the attacks came in fast and furious in what had to be one of the most hostile audiences he ever addressed. He did not blink, he did not flinch, he did not bend. When the last question ended, he turned to me to ask what next. After two more speeches, we took him to my home where we had arranged a dinner with Rhodes Scholars, many of them Jewish, most critical of Israeli policy. This time Bibi was softer in presentation but just as firm in conviction. Israel was a righteous nation, focused on maintaining democracy and human rights while facing existential threats on nearly every border. He spoke to the students of their responsibility to be proud defenders of their people and never bend in the face of opposition. The climax of the day was a lecture at the Union itself. Palestinian and Jewish protesters rallied outside in their hundreds with the rallying cry: "Net-an-ya-hu you should know, we support the P-L-O." Bibi left his security bubble and walked over to the protesters. "Come inside and listen. Then you can protest. I'll answer every question you ask." 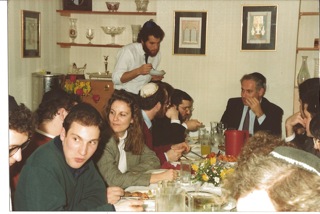 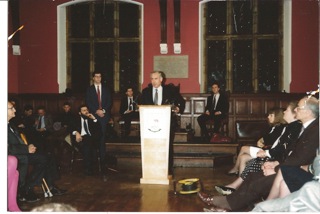 Bibi Netanyahu at dinner at the home of Rabbi Boteach with Oxford Rhodes Scholars, and lecturing at the Oxford Union.

Many left their barricades and joined the large crowd inside. What followed was one of the great speeches I have heard, a mesmerizing presentation of the need for democracy across the Middle East and the liberalization of Arab governments that deny their citizens their God-given human rights. At its high point Bibi said, "Many of us in Israel have buried children and lost brothers, in fulfillment of a simple dream for Jews to finally live and prosper in a country of their own in peace." He did not have to mention whom he was referring to as even his detractors knew of Entebbe and the hero-brother he had lost. Again he was bombarded with hostile questions. He responded patiently but forcefully. When he finished he was given a standing ovation by most of the students in the hall. It was a night few of us would forget. No Israeli prime minister has ever been as American as Bibi. And yet no prime minister has so successfully resisted the pressure from the leader of a country he loves so much for a country he loves even more. And the Israeli people, in supporting Bibi regardless of the absence of a stamp of approval from President Obama, are finally realizing that Israel cannot ultimately be protected from Washington but Jerusalem, especially when the current American Administration is not in step with the strong sympathy of the American people for a tiny and just nation fighting for its life.
Shmuley Boteach, "America's Rabbi" whom The Washington Post calls "the most famous Rabbi in America," has just published his newest best-seller, "The Fed-up Man of Faith: Challenging God in the Face of Tragedy and Suffering." Follow him on Twitter @RabbiShmuley. This column is dedicated to the memory of Machla Debakarov, the mother of a close friend of Rabbi Shmuley's.
Download
Calling all HuffPost superfans!
Sign up for membership to become a founding member and help shape HuffPost's next chapter
Join HuffPost