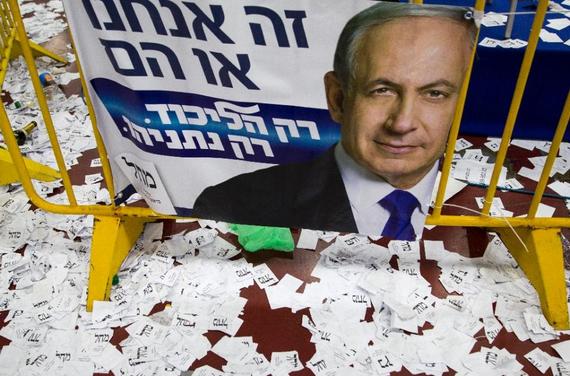 "Dear friends, against all odds we have achieved a great victory for Likud, for the national camp which is headed by Likud, for our people. I am proud of the Israeli people, who recognized what's important ... and stood up for real security, economy and social welfare, which we are committed to."

It's safe to say that Benjamin Netanyahu, a man who just made history by becoming the first prime minister to serve four terms, is a happy man at this hour. And he has good reason to feel happy; 24 hours before the polls opened, Israeli political analysts expected his opponent, Isaac Herzog, to pull ahead and relegate Netanyahu to the dustbin of history. But that clearly didn't happen -- by the time the ballots were counted, Netanyahu's Likud Party shocked even the most astute political observer in Israel. The final tally: 30 seats for Likud, 24 for Herzog's Zionist Union, 14 for the Joint Arab List, and a bunch of smaller parties spread between the 11 and 4 margin.

To put it bluntly, Bibi defied expectations and proved to people around the world that he is a very good campaigner. Although his comments about Arabs being bussed to the polls "in droves" rightly rubbed a lot of people the wrong way, they were effective in getting Israelis on the right to fill in a ballot before the election closed up.

Bibi would be foolish, however, to bask in the electoral glory for more than a couple of days. Once he assembles his governing coalition with the smaller, right-wing, pro-settler and orthodox parties, Netanyahu will have to rise to the occasion and act as a grown-up. And the first order of business is talking with President Barack Obama. The U.S.-Israel relationship is strong and always has been, but the Bibi-Barack relationship has never been worse. It's up to the junior partner, Israel, to make sure that the personal animosity that both leaders have towards one another (and there is personal animosity, whatever Press Secretary Josh Earnest says during his White House briefings) doesn't interfere or seep into the broader, strategic partnership at a critically important time in the region.

Coming off a surprise election victory, Netanyahu most likely feels he has the upper hand over President Obama. It's going to be incredibly difficult for Bibi to swallow his pride and admit that he needs the U.S. president on his side, regardless of how he feels about Obama personally. But he needs to take the time to do it. Calling up the White House, expressing his intention to work constructively with the administration over the next year and a half, and expressing his willingness to turn a new page would demonstrate to all of Bibi's skeptics in the White House and in Washington in general (I'm one of those Bibi skeptics) that he is responsible enough to get to work with Israel's most important ally.

If I were on President Obama's team, I would advise him to do the same thing. It may be up to the junior partner in the relationship to start the healing process, but it's up to the senior partner to have an open mind and listen to what's being said.

There is no getting around the fact that the Obama administration and Benjamin Netanyahu have diametrically opposing worldviews on the nuclear negotiations with Iran and the Israeli-Palestinian peace process, and it's unlikely that those views will be modified in any way. Both men view themselves as historic figures with the right ideas for their country, and both have political opponents that they no doubt despise with a passion. Obama and Netanyahu possess huge egos, and as we've seen over the past six years, big egos in the same room tend to clash. Yet Netanyahu's convincing victory also presents President Obama and his national security team with an opportunity to start over and begin a constructive dialogue to the benefit of both nations.

Netanyahu will never accept the nuclear deal that the administration is negotiating, and there's no use in the White House believing otherwise. But the U.S.-Israel partnership is a lot bigger and deeper than a single issue, however important.

Note to Bibi: don't use your latest victory as a bludgeon to beat the administration with. And note to Barack: don't write off the Israeli Prime Minister for the remainder of your term.