I sat there nervously as the auction was proceeding. Michael Steinhardt, a 20 year collector of Judaica and former client was divesting himself of his Judaica collection. No one was really sure why. A known billionare and lifelong hedge fund and Wall street guru, he certainly didn't need the money. He explained himself in the media, that he wanted his collection to be disperse to the next generation. As he passed seventy years of age, he knows like all men, nothing lasts forever. I was grateful. While he had hundreds of pieces in his collection including many that I sold him, there was only one that I wanted. It was this Hanukkah lamp hand crafted in Altenburg, Germany approximately 160 years ago that was shaped like a mystical, mythological creature. The auction house that was selling it on Michael's behalf, classified it as hydra. I'm not sure what gave them the right to do so. 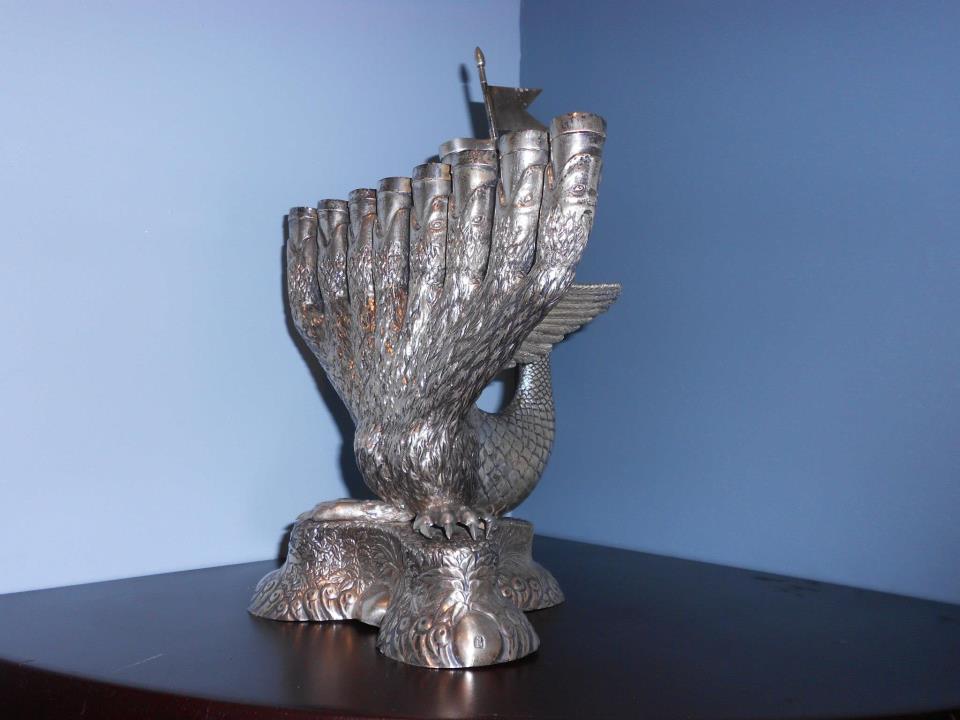 When I am asked to explain the deep biblical or historical meaning between different forms of artistic style in Jewish ritual art, I am usually at a loss. Some things are simple. Many menorahs and Torah shields are decorated with two lions, representing the Lions of Judah. Many are decorated with Solominic pillars, also an easy one, these represented columns of the Beit Hamikdash. Some designs are harder and need more research. For instance, there is a famous menorah made by Isaac Szekman in Warsaw in the 19th century and copied for generations. This menorah is decorated with palm trees. We can find the basis for this in tehillim "TZADIK CATAMAR YIFRACH" which loosely translates to a righteous man stands strong.

And some, like this Hanukkah lamp, no matter where I look, how hard I study, I cant seem to put this lamp together with any definitive reason. Could it be the artist's vision of a biblical Seraph? Serpahim can be found both in the Torah and afterwards (Num 21:6-8; Deut 8:15; Isa 6:6, 14:29, 30:6). Maybe? Is that what the silversmith that created this lamp had in mind when he was crafting it? Was he a fan of Greek mythology? It certainly looks like the eight headed hydra that was slain by Heracles and titled by the auction house that was selling it. However, that wouldnt make much sense. It would be a contradiction. We celebrate the victory over the Greek Assyrians on Hanukkah Why would we deify their pagan beliefs? Thus it couldn't be a hydra.

I don't know what the artist had in mind when crafting this piece by hand. I don't think that anyone will ever know. Just like Michael Steinhardt couldn't define what initially attracted him to buy this lamp and why he was selling it. It was just an emotion. I would hypothesize that the silver smith that crafted it felt the same. He just wanted to make a lamp that was BOTH halachically sound and be really cool.

Sometimes there is no reason. Sometimes, it's just artistic freedom.