What if reading the Bible was more like reading a novel?

Graphic artist and book designer Adam Lewis Greene has envisioned a Bible without chapters and his idea has found incredible success on the crowd-funding site Kickstarter. He hopes his design will emphasize the role of the Bible as a great literary text by taking away conventions which have been added to increase its usability as a tool for study.

Since posting his "Bibliotheca" project on Kickstarter on June 27, 2014, with the goal of raising $37,000 to produce a first run, the amount contributed by backers has shot up to over $800,000 as of press time. Over 8,000 people from around the world have funded the project. The fundraising drive ends on Sunday, July 27, 2014.

The website describes Bibliotheca as "The entire biblical library in four elegant volumes, designed purely for reading. The text is reverently treated in classic typographic style, free of all added conventions such as chapter numbers, verse numbers, section headers, cross references and notes."

Greene told The Huffington Post via email, that he was shocked by the response. "What I thought would be a small scale project for a niche pocket interest has received an overwhelming amount of attention across the globe from people of many backgrounds, faiths, and languages. Clearly this concept has struck a chord." 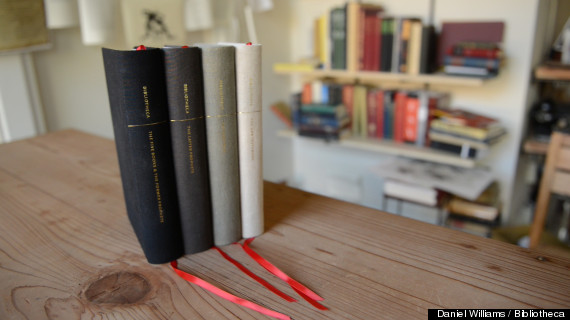 To create Bibliotheca, Greene designed original typefaces created to optimize a fluid reading experience. The page proportions and size of the text block are based on the dimensions of the Ark of the Covenant, as specified in Exodus. Bound in cloth with foil-stamped letters on the spine, the books have been made with comfort in mind. 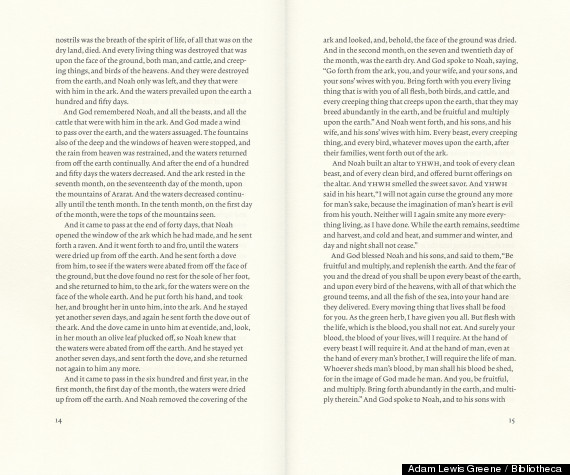 Why has the idea of a chapterless Bible caught on so quickly? Greene has a few ideas. "Three major threads that have been running parallel for some time now in my world are the recognition of the biblical anthology as great literature, an increasing interest in story, and a newly widespread appreciation of design as an enhancement to human experience."

In some ways, Greene views Bibliotheca as a return to an earlier type of Bible. "The biblical literature is naturally free of chapters and verses, and other conventions such as bonded leather, thin paper, and daunting, encyclopedic typography. In fact, the design and form of contemporary bibles has nothing to do with the literature itself," he said. "We’ve imposed all of this since the middle ages in the interest of systematic study, cross-referencing and proof-texting, and, sadly, over time it’s become a part of the vernacular of bibles."

Biblical scholars are intrigued by the idea as well. Greg Carey, a professor of the New Testament at Lancaster Theological Seminary, told The Huffington Post, "I can see why Greene's project is appealing. For starters, it is elegantly presented. But Greene also makes compelling points. Chapter and verse divisions are late additions to the Bible, and they do affect how people understand it. Many of the biblical books were composed as literature rather than for reference purposes: this edition honors that reality. And, with their diverse shapes and points of view, the biblical books indeed make more of a library than a single reference work."

Prominent Christian pastor Brian McLaren agrees that some readers may prefer this sort of text. "Chapter and verse designations are helpful when people are trying to find a passage, but they're distracting when people are simply seeking to read the Bible. Verse-less, chapter-less formats can help readers encounter the texts for what they are - not a theological encyclopedia, not a religious constitution, not lists of extractable quotations … but literary compositions," he said to The Huffington Post.

However, there are also a fair amount of potential problems that come with taking away the traditional structure of the Bible. Carey added, "Greene's edition raises some complications as well. Despite their problems we use chapter and verse numbers for a reason. No standard translation or edition of the Bible exists, so we need a convenient system of reference. Although I agree with Greene's emphasis on the individuality of each biblical book, the Bible's religious and cultural value depends on the reality that readers and reading communities engage the Bible as a whole."

Dr. Margaret Aymer, an associate professor of New Testament at the Interdenominational Theological Center, worries that the lack of footnotes may create a false sense of certainty for readers. She told The Huffington Post, "Even translations of classical works often have endnotes to indicate where there might be issues with the translation." Nonetheless, she said that she found the project "interesting" and "mostly harmless."

In a world where some people aggressively quote the Bible at each other, pulling out specific quotes (often out of context) to support their points, will this project make people focus on what the Bible means, rather than what it says? Greene says that he hopes so.