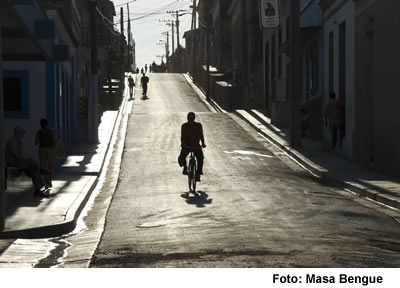 Twenty years ago our streets began to fill with bicycles and empty of cars. It wasn't in fashion to protect the environment, nor to get exercise, rather it was the direct result of the end of the Soviet subsidy. The preferentially priced oil supplies from the East were interrupted, public transport collapsed and my father lost his job as a train mechanic. In those days, getting to work could take the equivalent of half a day and we frequently traveled hanging out of the doors of the bus, like bunches of human grapes.

Then the successive shipments of bicycles from the land of Deng Xiaoping arrived, and were distributed among the outstanding workers and vanguard students. Now the reward for a meritorious task or for unconditional ideology was no longer a trip to East Germany or the delivery of the latest model Russian Lada, but rather a shiny Forever brand bicycle. Parking lots where the light vehicles were protected from thieves sprang up everywhere and my father opened a workshop to repair punctures. Innovations also appeared with the addition of baby seats, trailers and front baskets. Even women of an advanced age, reluctant to show off their legs while they worked the pedals, ended up adapting themselves to the rhythm of the times.

With the dollarization of the economy high level officials, artists and foreign residents were permitted to import their own cars, while tourists could rent a Peugeot or Citroen. So the streets experienced once again the steady rolling of tires. The number of bicycles dwindled because ships full of them no longer arrived, spare parts became scarce, and Cubans got tired of pedaling everywhere. A slight improvement in the bus service has led many to get rid of their rolling comrade, as if by this gesture they could rid themselves of the crisis.