Even for the hardest of hearts, this week was a particularly painful week. Nearly 300 innocent men, women and children were killed in a vicious rocket attack on a Malaysian airliner. Israel began a ground invasion into Gaza. The United Nations reported that over 5,000 Iraqis have been killed in the last six months. Desperate children are being harassed and imprisoned at America's borders.

The bad news is relentless. The Sudan, Syria, Afghanistan... The human experiment is failing. Of that I have no doubt.

I'm one of the fortunate. I don't live in a war zone. I don't duck bullets and bombs. My home isn't in shambles. I have plenty of food. I come and go as I please. And I have an outlet -- a way to pedal my tears away for those who are less lucky.

Cycling is my thing. Like Paul Rudd's character in Judd Apatow's This Is 40, when things get tough, I jump on my bike and ride as hard and far as my mind and body will let me. But for me, unlike Rudd, it isn't This Is 40. For me, it's actually This Is 65.

And so it was that yesterday, a particularly egregious day for humanity, with the clock passing 4 p.m., I began thinking about my bicycle. I felt the need to ride.

I was on twitter at the time, following news of Gaza and the downed Malaysian airplane. Just then an ABC Eyewitness News tweet hit my twitter timeline:

ABC7 Eyewitness NewsVerified account
‏@ABC7
#BREAKINGNEWS: LAFD on scene of a fatal crash in Canoga Park. At least one person has died. 2 vehicles and a bicycling (sic) were involved. lb

My neighborhood. A bicyclist. A death.

I ran out into my yard to look for a helicopter. Within a minute I saw it, hovering a slight bit east of my house. I grabbed my cell phone, jumped in my car, and drove around the corner. I immediately saw police cars, firetrucks and flashing red lights. I parked and walked the two blocks to the accident. For this cyclist, on this day of unthinkable global misery, this was the most unwelcome scene.

I approached the intersection of Sherman Way and Shoup. On the west side of Shoup, on the sidewalk beneath a stark white sheet, lay the body of a woman. Next to her, on the street at the curb, was a sleek black bicycle similar to the one I'd recently purchased, which I, too, often ride on this street. The cyclist had no helmet. 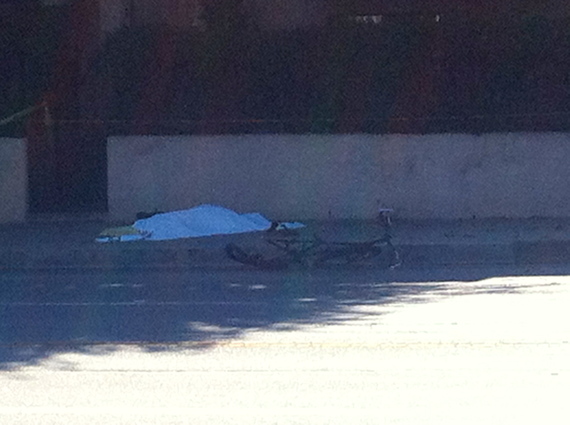 The circumstances of the accident were macabre. An elderly woman in a 2004 silver Lexus LX430, traveling north on Shoup Avenue, was making a left turn at the light to proceed west on Sherman Way. 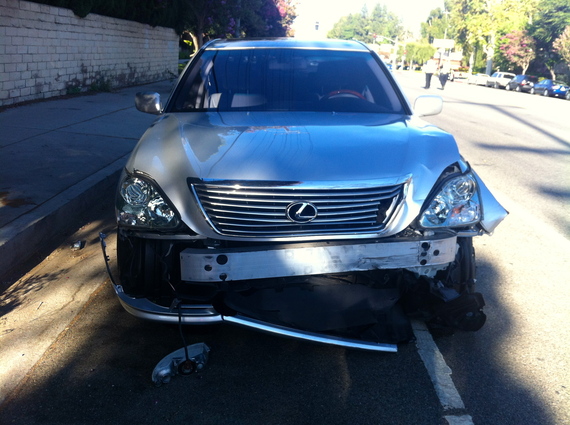 A 1993 Toyota Camry, with a male driver, age unknown, traveling south on Shoup, entered the intersection at the same time. The Lexus and Toyota collided, sending the Toyota onto the sidewalk and into the bicyclist who was standing on the sidewalk with her bike. According to Investigator McCracken of the Los Angeles Coroner's Office, the cyclist suffered multiple traumatic injuries to her face and body. 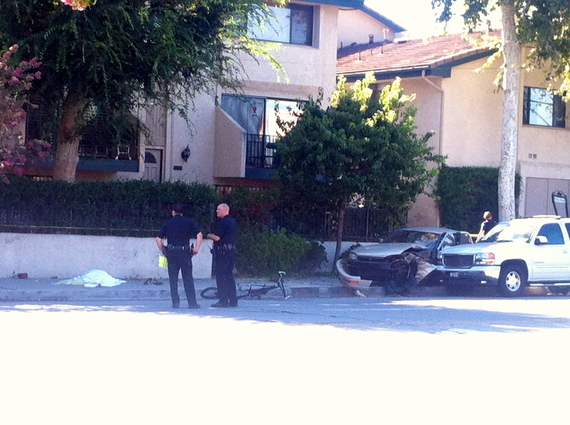 The identities of the drivers of the autos have not been released. The elderly woman driver was able to leave the scene with what appeared to be minor injuries. According to Detective Fajardo of West Valley Traffic Division, the Toyota driver is hospitalized in stable condition. Toxicology tests are underway.

The cyclist carried no identification. The Coroner said she'd been preliminarily identified but due to the extent of her injuries, final identification will be based on fingerprints or dental records. Her identity will be public sometime next week.

I asked Investigator McCracken if a helmet would have made a difference. She told me no. She didn't stand a chance.

I didn't ride my bike today. I kept thinking about that young woman. But I will ride both Saturday and Sunday. I'll carry identification as I always do. I'll wear a helmet. I'll ride my ass off as I always do. This is me at 65. And that woman -- that cyclist who didn't stand a chance -- well, the police on the scene estimated her age around 40. That was her 40.

Whether it be Gaza, the sky, or a peaceful sidewalk in Los Angeles, all we have is our life. Those who take the lives of others, take away the universe. No one has that right.

To bicycles. And peace.