During a trip to India in the summer of 2001, my mother made a pilgrimage with her cousin to the city of Shirdi, home to the shrine of Shirdi Sai Baba (1835-1918), a holy figure revered by both Hindus and Muslims. 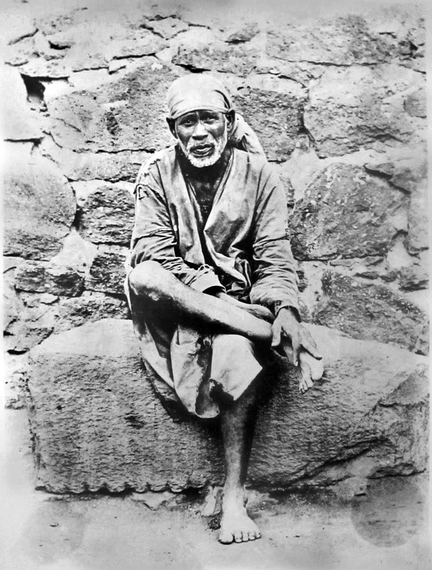 As she would later tell us, their voyage to the city was nearly derailed by bad weather (the summer monsoons in Maharashtra) and an unwillingness by most taxi drivers to make the 1.5 hour drive from the train station to the holy site. That is, until a bidi-smoking Muslim taxi driver pulled up in a barely functioning old Fiat taxi, got out and welcomed my mother, her cousin, and a family friend who also joined in the journey, into his car.

The taxi driver not only took them to Shirdi, but volunteered to drive them around Shirdi, and then take them to other Hindu temples in the surrounding area. For the two days they were in the city, he would pick them up promptly at their hotel and take them wherever they needed to go. All the while, he chain-smoked his bidis and told my mother and her traveling companions the stories behind Hindu religious shrines.

When she returned from Shirdi, she recounted in near disbelief of how the taxi driver saved their pilgrimage and made sure they were safe from sun up to past sun down. My grandmother told her that Shirdi Sai Baba (who was known to smoke the thin cigarettes known as bidis himself) took on numerous incarnations to make sure that devotees could visit his shrine safely, intimating that the bidi-smoking Muslim cab driver was none other than Shirdi Sai Baba himself.

My mother would tell this story many times until her death, calling her experience a miracle. In addition to preserving the legacy of oral transmission that is one of the bedrocks of Hindu tradition, my mother's story also encapsulates how many Hindus define miracles: an affirmation of the Divinity they experience in their daily lives.

The term miracle itself is often meant to describe a supernatural occurrence, and it is frequently used in Christian stories - particularly among Catholics - as a means of proving a Divine truth. Throughout the spread of Christianity to other parts of the world, miracles were often used to explain the power of Christ's word, and more importantly, win converts to the faith.

However, for Hindus, the term miracle isn't necessarily supernatural. Instead, it's a means of appreciating the daily affirmations of belief in everyday life. These affirmations can come in all forms, and my mother's belief that Shirdi Sai Baba himself escorted her safely to his shrine is indicative of how blessed she felt in being able to make the journey - as a foreign visitor with a lack of knowledge of the city - without incident.

For many Hindus, miracles aren't about what is seen, but more about what is understood. Each day we live is marked by some form of adversity, struggle, or suffering, yet each day is also marked by triumph. Contextualizing those triumphs within the sphere of the miraculous not only strengthens one's faith, but also provides the basis from which we see the Divinity within our own lives and in others.

During my mother's struggle with breast cancer, the suffering was counteracted by an affirmation of the Divine. Whether it was the inspiration she received from reading the biographies of Shirdi Sai Baba (Sai Satchitra), the 20th century saint Ramana Maharshi, or the 17th century saint Raghavendra, my mother believed that every day of living was a miracle and strengthened her faith.

My mother wasn't alone in the way she viewed miracles. One of the great contributions of the Bhakti movement to Hinduism has been its emphasis on the personalized connection between the practitioner and the Divine, making miracles both palpable and an integral part of daily living. For Hindus, the idea of miracles can comport easily within the realm of the rational, because so much of how we see the world is predicated on more than what we see - it's understanding the meaning of what we see.

Perhaps that taxi driver wasn't an incarnation of the Shirdi Sai Baba in the metaphysical sense, but my mother saw the Divinity of the Shirdi Sai Baba in a man who was willing to guide her to the destination she had traveled a long way to visit. It also affirmed the universal Hindu belief that the Divine resides in all beings. Such an approach is a great way to appreciate the miracle of our daily existence, relying less on what is supernatural and more on what is tangible.

Maybe even today, that Muslim taxi driver, wearing his kufi and smoking his bidis, is happily making a miracle for other devotees of the Shirdi Sai Baba, and by doing so, continuing the strength of belief that guides so many Hindus everyday.