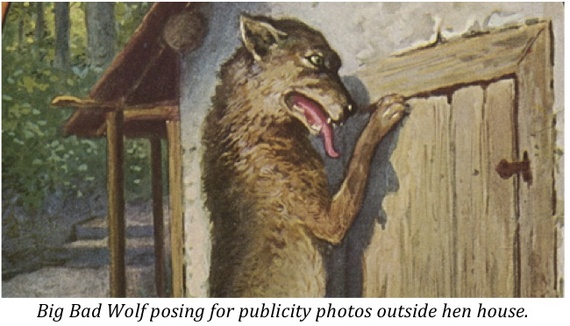 In the wake of criticism over crass, destructive and sometimes-violent behavior, the Big Bad Wolf embarked on a rebranding effort by retaining a public relations firm to revamp his image. "Sure, I've blown down a few houses and ate a few grandmothers, but it's time the public get over it already," Wolf said.

His publicist broke in, "The Big Bad Wolf is not the menacing character from the stories you've heard -- and those are just that -- stories. We're going to show the other side of Wolf. You know, a little more Dances with Wolves and a little less Peter and the Wolf."

"Peter's a loser. Forget that guy," Wolf scoffed. "Listen, every public figure comes under scrutiny. I don't want to be like the boy who cried me. I'm not saying this is a witch-hunt because unlike me, that B had it coming -- but I am constantly vilified by the liberal media because of my success and classiness," Wolf said before returning to licking his balls.

The PR firm declined to disclose the amount of the retainer but did say it was for "quite a large sum" and that they had its "work cut out for them."