Casinos bet against their customers. Should banks? It seems like some do by encouraging us to use our debit cards so they can collect fees when we overdraw our accounts. According to the Center For Responsible Lending (CRL), over 50 million people overdrew their account in the last year and more than half of these consumers overdrew their account five or more times. CRL cites debit cards as the primary culprit:

"The most common trigger of overdraft fees are small debit card transactions that could easily be denied for no fee." Center For Responsible Lending October 2009

We analyzed banks and credit unions in FindABetterBank to see if there's any correlation with pricing for overdraft-related fees and debit reward cards. Well... it appears as if many of the big banks have placed their bets against us. Here's what we learned (see Figure 1 "Big Banks Push Debit Rewards To Capture Overdraft-Related Fees"): 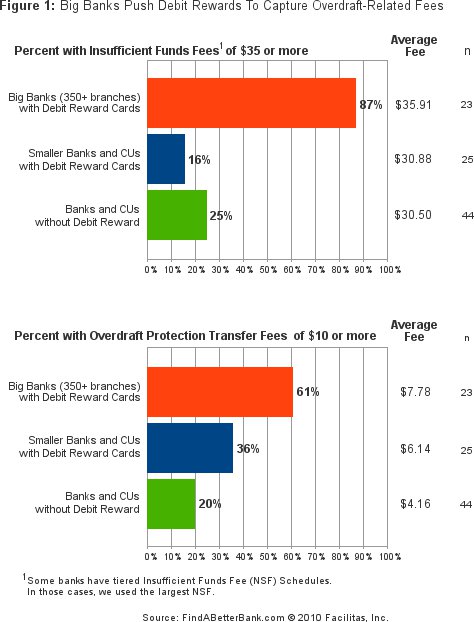 Change is coming in the form of proposed new government oversight and regulations. Recently, Bank of America tried to get ahead of the curve, announcing they won't charge customers overdraft fees for debit card transactions anymore. Many people believe the move was a PR ploy because the proposed legislation will require this change (See New York Times March 9, 2010 "Bank of America to End Debit Overdraft Fees"). I think this post supports the argument that we need more oversight into the practices of our financial institutions.