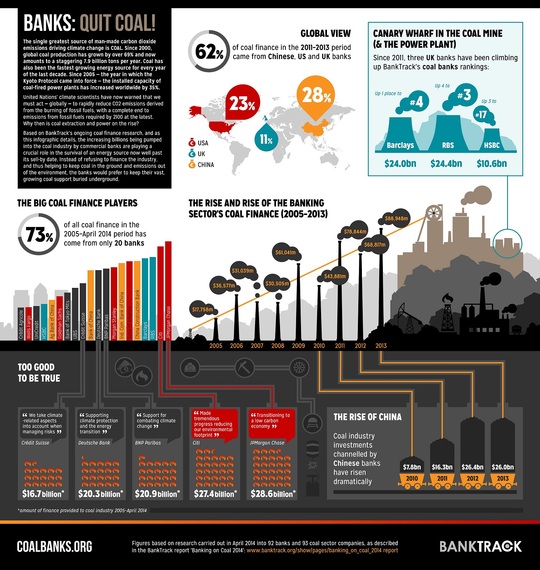 The eyes of the world are yet again trained on the laundry list of financial industry villains who were just levied an eye catching $4 billion in fines for the manipulation of foreign exchange rates. But, as the nations of the world meet in Lima, Peru this week at the annual COP climate negotiations to address climate disruption, it's their financial support for the coal industry that is causing widespread, but under-reported, systemic destruction.

According to Grist's David Roberts "coal is the enemy of the human race." In fact, the coal industry wreaks devastation at all steps of its life cycle from extraction, to transport, to power production, to disposal. All told, mainstream economists believe it actually extracts, rather than adds, value to the global economy. Yet, the finance industry has been slow to recognize just how devastating this dirty rock really is.

Instead, based on new research published by BankTrack, big banks are financing the coal industry to the tune of $89 billion annually, with a whopping $500 billion since 2005. A sum that, due to research limitations (the banks don't exactly trumpet their financial support for big coal in their literature), could be as much as 50 percent higher.

This giant slap in the face to humanity comes to you courtesy of top offenders JP Morgan Chase, Citi, Royal Bank of Scotland, Barclays, China's Construction Bank, and 15 other top coal banks in the world that account for 73 percent of that amount.

Simply put, coal financing must end if we have any chance of avoiding catastrophic levels of climate change. But what's really ironic is just how out of touch this financing is with the current financial state of this moribund industry, let alone international policy-making.

Take for example the recent excellent analysis of the divestment movement from Nat Bullard at Bloomberg New Energy Finance (BNEF). While Nat found that fossil fuel divestment is generally pretty tough, there was one glaring standout - the coal industry. As it turns out, even leaving climate destruction aside, pumping money into coal is a pretty terrible investment and has generally - and dramatically - underperformed in the market. Coal is the low hanging fruit of the divestment movement. 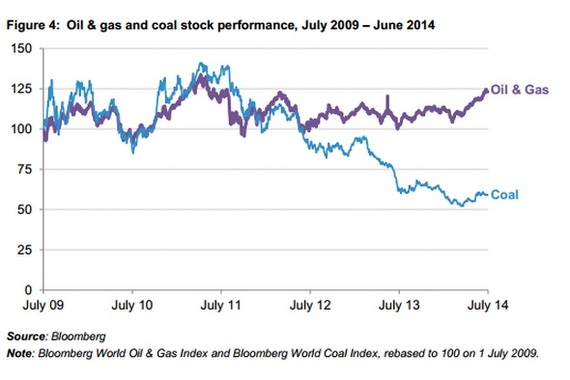 Even more glaring is the fact that the industry's political patrons are now abandoning it. When it comes to top international public financiers, coal couldn't be a dirtier word. Since last summer, the World Bank, European Investment Bank, European Bank for Reconstruction and Development, and the U.S. Export-Import Bank have all implemented restrictions on coal financing. A number of countries -- including the U.S., U.K., Netherlands, Nordic countries and most recently Germany -- have done so as well.

Indeed, when it comes to public divestment from coal, the dominoes keep falling -- all of which stands in stark contrast to the approach these big banks have taken to coal.

In fact, according to Banktrack, the $89 billion ponied up in 2013 made for a record year. This is essentially a financial lifeline to a dying industry trying desperately to rebrand itself with a sleazy energy poverty campaign as policymakers concerned with its effects on public health and climate run for the exits.

Unfortunately, none of the major banks have policies in place that might restrict further growth in their coal corporate financing, let alone put an end to it once and for all.

Some, such as Royal Bank of Scotland, have made small, welcome steps forward by pulling out of the barbaric mountaintop removal coal mining sector. Other small cracks of light visible at the end of the tunnel include recent commitments from some of BankTrack's top 20 coal banks (notably JPMorgan Chase and Citi) to avoid the Abbot Point coal port expansion project that would endanger the Great Barrier Reef.

But all told, that's clearly not enough.

In the meantime, for those communities around the world being steamrolled by mine projects and polluting power plants enabled by this river of dirty money, divestment is an imperative. Because when it comes to financing coal, there's no way to keep your hands clean.

If you want to take a step to stop supporting banks that further climate change, the Sierra Club offers a credit card in partnership with Beneficial State Bank that supports clean financial tools, local communities, and clean-energy projects. When you use the Sierra Club credit card, your money doesn't support environmentally destructive projects, and revenue from the card also helps to support the Sierra Club's work. To date, Sierra Club members' use of the card has diverted more than $13 million from big banks financing dirty energy, and we're working to grow that number even more substantially in 2015.

Subject to credit approval. This card is issued by TCM Bank, N.A. Beneficial State Bank, a certified CDFI and B Corp, has partnered with TCM Bank, N.A. to offer the Sierra Club credit card.