Ever wonder which country in the world boasts the women with the biggest boobs? (You don't have to answer that.)

Well, turns out there's a map for that: a boob map, you might say. German newspaper Bild has debuted its "Atlas of cup sizes" map, which is essentially a carbon copy of the "Average Breast Cup Size in the World" map created on map-making site TargetMap.com last year.

Neither map specifies how the breast sizes were measured (although we'd imagine tracking bra purchases per country would be an ideal -- and fairly non-creepy -- approach). Nonetheless, on both maps, the women of Russian, Finland, Sweden and Norway seem to be the big "winners," boasting "larger than a D cup" bra sizes. Kudos, ladies.

Lest any Americans reading this feel inferior, know that women in the U.S. have mostly D-cup breasts, along with Venezuela and Colombia. As for the smallest chests, apparently those are found in Africa and Asia, particularly in East Asia. So now you know.

Surprised by any of the findings? We suggest taking them all with a grain of salt, as it's hard to imagine that anyone has measured every chest in the world or taken a worldwide account of what size bras women buy. Plus, do breast implants count, or are we talking au naturel exclusively? Unclear.

Regardless, we're a bit surprised that America didn't take top honors -- after all, the woman with the world's biggest natural breasts lives right here in Atlanta, Georgia. (Then again, we have a few small-breasted ladies as well.)

Check out the very unofficial boob map from Bild. Any, um, thoughts? 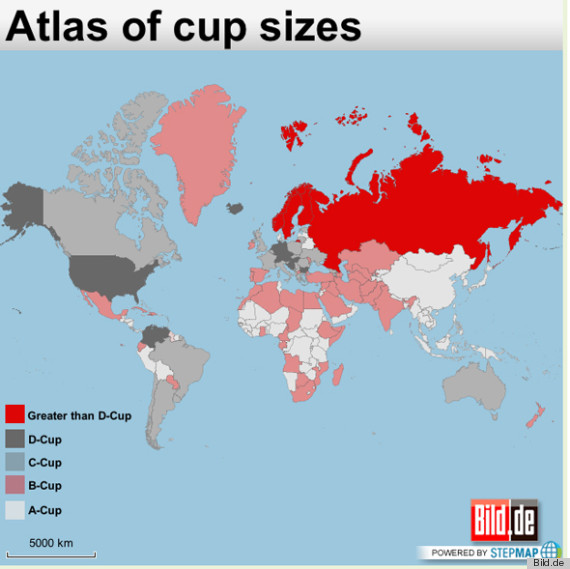