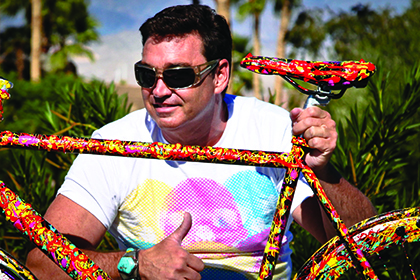 Tomorrow through Sunday (October 3 through 5) many of the world's the uber-wealthy citizens will gather in Dubai to attend Big Boys Toys. Here, the latest technology -- the "toys" -- will be on display and for sale.

Among the exhibitors is artist Jack Armstrong who, in 2011, sold a Harley-Davidson he painted fro $3 million. This time, he is showing his $3 million Cosmic Star Cruiser bicycle.
He was invited to the event by organizer Artaaj and, he says, "Coming to Big Boys Toys is a humbling experience, a great honor for an American artist.

"Having already had the experience of being collected by Alice Walton Crystal Bridges, architect Narendra Patel and French superstar Michel Polnareff among many others, bringing my cosmic extensionalism to Dubai will introduce my art to a region that is becoming consumed with high-end international art."

Armstrong was a protégé of Andy Warhol's, whom he met in Bloomingdales in Manhattan in the 1970's. He recalls he told Warhol, who lived in a townhouse near Bloomingdales, "'One day I'll invent a new art style and, one day, I'll do the worlds most expensive bicycle." And, all these years later, this is that bike.

He recalls that his friends Andy Warhol and Roy Lichtenstein "were attacked for their work but, today, are highly prized. "That wasn't always so," he notes, "They took objects no one considered to be art and made them art. Like everyone else with a new kind of art, they were attacked." 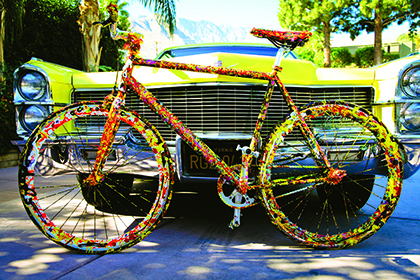 Armstrong, who vowed to paint only 100 works, says, "I was compelled to bring the art bike here, to people who are building the most modern cities on earth -- cities that no one else is even attempting. It's almost a mission because the people here build aspirations that makes these places truly one of a kind in the world.

"I've never been to this part of the world," he says, "but, having already had the experience of being collected by Alice Walton (founder of Crystal Bridges Museum of American Art), architect Narendra Patel and French superstar Michel Polnareff among many others. So, bringing my cosmic extensionalism to Dubai will introduce my art to a region that is becoming consumed with high-end international art and where one-off art pieces sell very well."

Jack Armstrong says his work is "extremely complex" although it is often compared to that of Jackson Pollock. He uses "a secret mix of acrylics" where Pollock used house paint. "I paint outside so the work reflects the sun. There are words and bright colors and textures in my art. People looking at my work often feel compelled to touch it." The bicycle he used for the art piece is made by Solé Bicycles in Venice, CA.

If the bike sells at Big Boys Toys, Armstrong will donate half of the purchase price to The Academy of Business Leadership (ABL), a California-based organization that helps young people learn to be successful in business.

Among those selling high-end products at the event are Triumph, Mercedes, Judith Leiber. There's a diving submersible, smart watches, jet skis that fly -- lots and lots of great, innovative stuff. But the only real art is the Cosmic Star Cruiser.

And, while one or two others have made what they call "art" bikes (check online) Armstrong's is the most intense, original and beautiful of all.