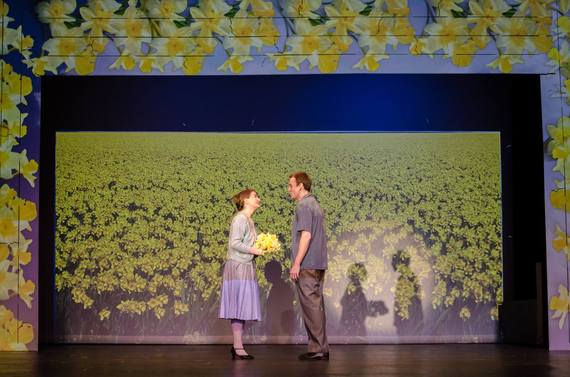 Unlike the movie, which could rely on special effects, camera angles and detailed scenery, the musical was dependant solely on talent and a few cleaver staging elements. Key among those elements was the theater's new state-of-the-art sound and projection system, which allowed numerous unique settings to be projected (and moved) on the stage background. The sound system not only projected great sound throughout the theater, it also allowed for sounds like the skipping of a stone on water to travel from the stage to the back of the house.

The acting and singing in Big Fish was brilliantly led by Chris Shea as the storytelling Edward Bloom and Dakota Daley as Will Bloom. Then there was the menagerie of characters from the witch to Karl the Giant to Amos Calloway the circus ringmaster who was also a werewolf. Easy enough to portray in a film, but live theater is another story. Still, the actors pulled this off with a poise that made all the bizarre elements of the Edward Bloom's stories appear as part of a tightly woven plot. Combining that story with a great orchestra, made this production of Big Fish a show that kept the audience involved and curious until the final curtain.

All in all, this community college production was worthy of the standing ovation it received. Hopefully, this will be the first of many such shows in their newly refurbished auditorium.