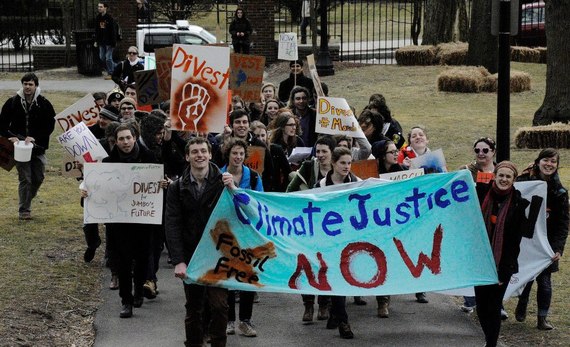 When I shut my eyes, I am grateful for all the growth the student divestment movement has seen in the last two years. Just in the last month, the divestment movement has made headlines in USA Today, The Washington Post, the Boston Globe, TIME, and Al Jazeera.  Half a dozen schools have committed to divesting, and while the Harvard and Brown presidents are bemoaning their students' rising voices and defending their schools' dirty endowments -- it means student campaigns are working. And to talk about that media coverage a little more, TIME Magazine reported that the fossil fuel divestment movement is the "fastest growing divestment initiative ever" and Alberta's premier oil magazine noted that the oil industry "ignores the fossil fuel divestiture movement at its own peril."

This is all a huge deal -- and a testament to this movement's hard work.

And yet, when I shut my eyes -- I imagine this youth movement seizing even more of its potential.

We need youth power -- your power -- far more than ever before.

When student leaders held the first Divestment Convergence last year on Swarthmore's campus, I remember seeing this sign and it sticking with me: “Divestment is a tactic – Climate Justice is the goal.”

Divestment has proven itself to be an unbelievably effective tactic, and one that should not be waned -- but if it just a tactic, what are our other tactics, and what is our strategy for winning?

Sometimes I hear inspiring metaphors between fossil fuel divestment and the anti-apartheid movement's use of divestment. And yet, if the South Africans only executed on divestment as their sole and major tactic -- would they have won?

Young college students today have far more power than you realize. You are the first generation that isn't just fighting for your grandkids, or for your children per say -- but for your own future. It's your future on the line. Your very tomorrow is being fracked. And that gives you tremendous power as organizers -- to use your voice of moral urgency.

And the few young women I've met and the many others who are having real deep fears about having children in a world that is on fire -- your voice holds even deeper power.

And we need that power, and your voices. We need more youth-led tactics, strategies, and visions. We need you to rise beyond the scope of divestment activists in 2014, and as full leaders in this work.

To be clear, we are in real trouble. We are in borrowed time. The people of New York's Rockaways and the Philippines can tell you this. Super storms like Sandy and Haiyan are here. The threat is here. Our world is living in fear -- and a state of unraveling.

So, let me tell you what else I see when I shut my eyes.

When I shut my eyes for the new year:

In 2014, I imagine students rising up like never before to challenge fracking around this country. I imagine days of action in 2014 when divestment activists take treks off their campus to local fracking wells and gas plants, and use their bodies to shut down 100 wells and plants in one day. And then start to hold them. The only threat as everywhere as the threat to clean endowments is the threat to clean water -- and chances are that threat is alive and well not far from your campus walls. You can learn more about it this March at the first Shale Field Justice Spring Break.

In 2014, I imagine youth adding fresh momentum to Appalachia's still-ongoing plight to end mountaintop removal and heal her hollers with a new ecomony -- joining groups like Coal River Mountain Watch, Kentuckians for the Commonwealth, SAMS, and RAMPS.

In 2014, I imagine even more youth enjoining themselves to indigenous struggles around this continent -- Turtle Island -- and finding ways to get behind and be of service in these long-standing struggles for justice.

In 2014, I imagine young people figuring out how climate activists can effectively volunteer in the wake of major climate disasters. Right now we donate money and we hold vigils. This new generation figures out how to train and deliver volunteers to communities devastated by unprecedented hurricanes and wildfires. And to genuinely help, not preach. To maybe wear a red dot patch, but to be a part of the resiliency and compassion of a new world.

In 2014, I imagine young people drawing fresh alliances with the immigrant rights and racial equality movements as well as other social justice fights – like the Dreamers and the Dream Defenders, building power for the just future we are all fighting for.

In 2014, I imagine students moving not just money -- but the hearts and minds of America. It is the year that this country's people realize that it's their youth who are being truly truly fracked, and their youth won't stand it anymore. You have lit this country on a different kind of fire. And the people themselves start to join this early rebellion.

To be clear, you have the power. You and frontline activists, and Indigenous leaders. And I for one, am willing to follow your lead in 2014.