America is the richest country on Earth. We have the most millionaires, the most billionaires and our wealthiest citizens have garnered more of the planet's riches than any other group in the world. We even have hedge fund managers who make in one hour as much as the average family makes in 21 years!

This opulence is supposed to trickle down to the rest of us, improving the lives of everyday Americans. At least that's what free-market cheerleaders repeatedly promise us.

Unfortunately, it's a lie, one of the biggest ever perpetrated on the American people.

Our middle class is falling further and further behind in comparison to the rest of the world. We keep hearing that America is number one. Well, when it comes to middle-class wealth, we're number 27.

The most telling comparative measurement is median wealth (per adult). It describes the amount of wealth accumulated by the person precisely in the middle of the wealth distribution -- fifty percent of the adult population has more wealth, while fifty percent has less. You can't get more middle than that.

Wealth is measured by the total sum of all our assets (homes, bank accounts, stocks, bonds etc) minus our liabilities (outstanding loans and other debts). It the best indicator we have for individual and family prosperity. While the never-ending accumulation of wealth may be wrecking the planet, wealth also provides basic security, especially in a country like ours with such skimpy social programs. Wealth allows us to survive periods of economic turmoil. Wealth allows our children to go to college without incurring crippling debts, or to get help for the down-payment on their first homes. As Bill Holiday sings, "God bless the child that's got his own."

Well, it's a sad song. As the chart below shows, there are 26 other countries with a median wealth higher than ours, (and the relative reduction of U.S. median wealth has done nothing to make our economy more sustainable.) 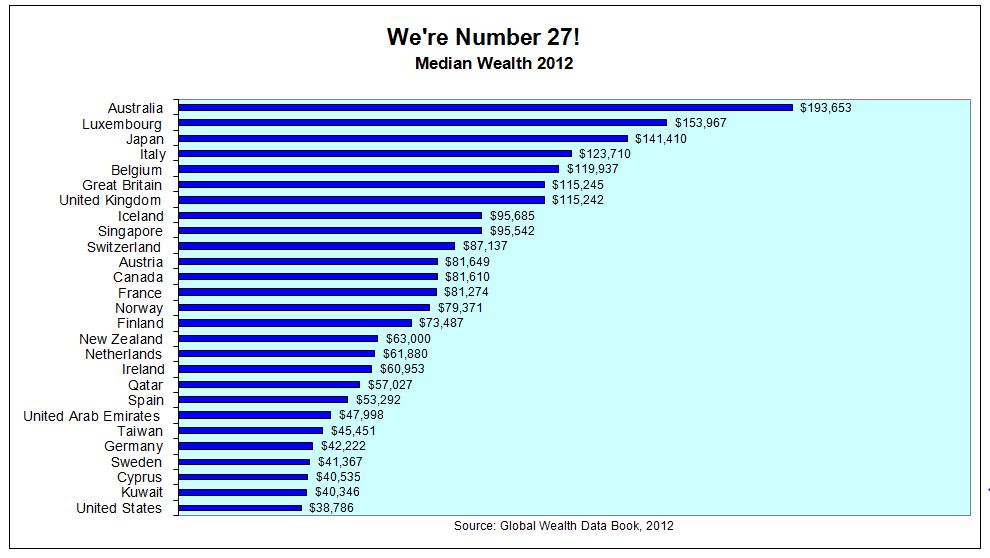 Is there one cause of the middle-class collapse that rises above all others?

Guess which one had the biggest impact on the growing split between the one percent and the 99 percent?

What is that? Economist Gerald Epstein offers us a working definition:

"Financialization means the increasing role of financial motives, financial markets, financial actors and financial institutions in the operation of the domestic and international economies."

This includes such trends as:

• The corporate change during the 1980s to make shareholder value the ultimate goal.

• The deregulation of Wall Street that allowed for the creation of a vast array of new financial instruments for gambling.

• Allowing private equity firm to buy companies, load them up with debt, extract enormous returns, and then kiss them good-by.

• The growth of hedge funds that suck productive wealth out of the economy.

• The myriad of barely regulated world financial markets that finance the globalization of production, combined with so-call "free trade" agreements.

• The increased share of all corporate profits that go to the financial sector.

• The ever-increasing size of too-big-to-fail banks.

• The fact that many of our best students rush to Wall Street instead of careers in science, medicine or education.

In short, financialization is when making money from money becomes more important that providing real goods and services. Here's a chart that says it all. Once we unleashed Wall Street, their salaries shot up, while everyone else's stood still. 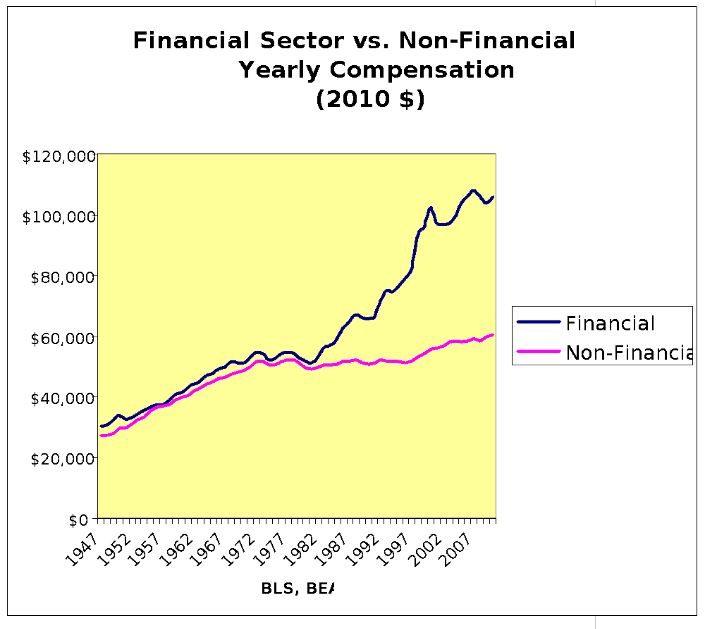 Do we still know how to fight?

The carefully researched ILO study provides further proof that Occupy Wall Street was right on the money. OWS succeeded (temporarily), in large part, because it tapped into the deep reservoir of anger toward Wall Street felt by people all over the world. We all know the financiers are screwing us.

Then why didn't OWS turn into a sustained, mass movement to take on Wall Street?

One reason it didn't grow was that the rest of us stood back in deference to the original protestors instead of making the movement our own. As a result, we didn't build a larger movement with the structures needed to take on our financial oligarchs. And until we figure out how to do just that, our nation's wealth will continue to be siphoned away.

Our hope, I believe, lies in the young people who are engaged each day in fighting for the basic human rights for all manner of working people -- temp workers, immigrants, unionized, non-union, gays, lesbians, transgender -- as well as those who are fighting to save the planet from environmental destruction. It's all connected.

At some point these deeply committed activists also will understand that financialization both here and abroad stands in the way of justice and puts our planet at risk. When they see the beast clearly, I am confident they will figure out how to slay it.

The sooner, the better.

(This article was originally posted on Alternet.org)

Les Leopold is the director of the Labor Institute in New York and the author of How to Make a Million Dollars an Hour: How Hedge Funds get away with Siphoning off America's Wealth (Wiley 2013)