How many actual copper lines, much less fiber optic access lines are in service in America today? AT&T, Verizon and CenturyLink claim that they are 'losing copper lines' and use this to drive public policy decisions to 'shut off the copper', raise rates or not maintain the copper networks.

However, a previous article outlined that the majority of copper or even fiber optic wires in America are not being counted. This chart details the total lines in America, as well as and basic copper-based landlines, commonly referred to as "POTS", plain old telephone service. Notice anything funny? 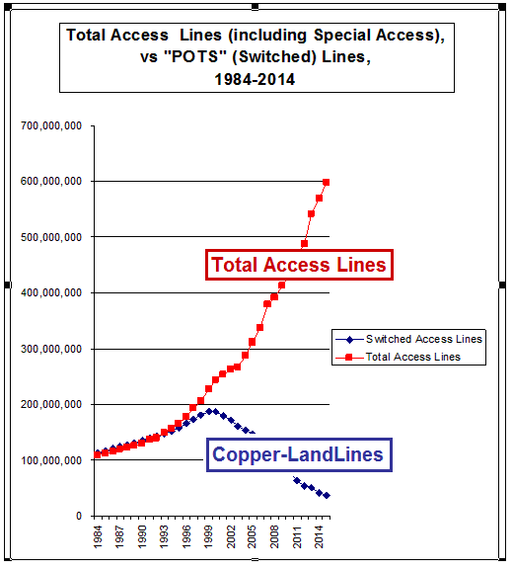 Unfortunately, the facts of this accounting seem to have been subverted so that only a subset of the lines are being discussed, the copper-landlines, not the Total Access lines. (I'll come back to this chart in a moment.)

For example, Georgetown's Center for Business and Public Policy filed a report with the FCC on March, 16th, 2016, claiming that AT&T, Verizon and CenturyLink (commonly known as an "ILEC", Incumbent Local Exchange Carrier) have lost over 65% of lines since 1999.

"According to the FCC's most recent Local Competition Report, by 2013 the ILECs' wireline networks had lost 59% of the lines they'd had in 1999, the first year such a report was issued... Given the rate of loss over the prior years and reported results in 2014 and 2015, we estimate that by the end of 2015, the ILECs had lost 65% of the access lines they had at the peak."

This Georgetown data and report have an agenda, as can be seen by the title "Business Broadband: Assessing the Case for Reregulation". Its goal is to claim that AT&T, Verizon and Centurylink have lost so many lines that they are no longer the 'dominant' carrier, i.e.; there's plenty of competition and therefore the FCC should get rid of any remaining regulation or obligations to allow competitors, (commonly known as "Competitive Local Exchange Carriers, "CLEC"), to offer services and use these state-based utility wires. In fact, the FCC should not consider any new 'reregulation' of these state utility networks or special access lines.

But there's a problem with the report; the number of "wireline network" lines has been going up, not down.

In 2015, the FCC released new data claiming that there was over $40 billion in broadband and data service revenues, (known as 'special access') in 2013, and that a whopping $24 billion, the majority, was still mostly-copper based services. (These findings more than doubled the FCC's original findings in 2013, that the special access market was only $12-$18 billion in revenues.)

However, the FCC provides 'zero' lines for this upgraded-revenue analysis, and worse, in multiple recent decisions, the FCC is still basing the accounting of access lines by quoting manipulated data points and only discussing the 'copper-landline' accounting and not the actual total lines in service.

If there is $24 billion dollars (in 2013) of mostly copper-based TDM, special access service revenues, a doubling of the revenues since 2007, then exactly how can anyone say that access lines went down?

And in 2007, the FCC's own statistics showed 379 million total lines. If revenues of the largest category of lines, (special access) doubled from 2007-2013, then, we would expect that access lines to provide these services also doubled. We pegged the total access lines in America to be around 600 million total lines, and that's probably low. And we believe that the POTS landline number is probably around 36 million total.

CAVEATS GALORE: We note that there are a host of caveats and issues, which we go through in some detail in the previous article. But "POTS' phone service was always a subset of the total number of lines, and by 2014 it could represent as little as 5%-10% of all lines. And note that there are lots of different categories of lines that are copper-based but are not part of the accounting.

"Indeed, by the end 2015, we estimate that wireline competitors had roughly the same number of lines as the ILECs."

It would appear, then, that the goal of this data is to show that AT&T, Verizon and Centurylink are really losing lines and that they don't have market power, and we should feel sorry for the "ILEC", the incumbent phone companies, AT&T, Verizon and CenturyLink, and give them more deregulation - or whatever they need to survive. Unfortunately, using just a subset of total lines can't support any claims that the competitors have the same number of lines as the incumbent phone companies; it's just make believe.

Note: "Business Broadband: Assessing the Case for Reregulation" was written by Anna-Maria Kovac, Visiting Senior Policy Scholar at Georgetown's Center for Business and Public Policy, McDonough School of Business, and John W. Mayo is the Center's Executive Director. The author of this report has written previous studies that were paid for by an AT&T-supported group, the Internet Innovation Alliance. And John Mayo recently wrote a paid-for-by-Verizon filing/response that was part of the Verizon New York testimony to help Verizon's request for more deregulation. Also, the school's funders include AT&T, Comcast Corporation, CTIA, (wireless association) U.S. Telecom (phone lobby/association) and the Verizon Foundation.

All of the Wires are Part of One Network.

There is, in fact, only one network, but you wouldn't know that from the accounting of lines and it is commonly known as the "PSTN", Public Switched Telephone Networks, but it should have been called the Public Networks, which, of course, was funded by customers.

This next quote is from the Verizon New Jersey 2000 Infrastructure Report and was part of the required annual progress reports of the company's progress in the deployment of fiber optics and the replacement of the aging copper networks. Known as "Opportunity New Jersey", by 2010, Verizon NJ was supposed to have 100% of their state territory covered to provide services that are capable of 45 Mbps in both directions, or higher.

The Opportunity New Jersey plan, agreed to in 1993 by the NJ Board of Public Utilities, "NJBPU", changed state laws to charge local phone customers extra for this replacement of the copper wire with fiber optics -- and there have been multiple rate increases and tax perks over the next two decades, even though Verizon did not fulfill their obligations.

But most importantly, the Verizon NJ 2000 Infrastructure Report specifically states that this plan was based on the fact that there is only 'one single network'-- and that customers paid (and continue to pay) for this one, single network.

"By integrating a number of services on a single network, Verizon NJ will optimize our service delivery capabilities. The evolution to the full service ATM switched broadband network will significantly increase the efficiency of serving New Jersey through automated provisioning and activation processes, increase capacity availability, and result in an even more flexible delivery platform. Verizon NJ's integrated network of switches, transmission facilities and operating systems provides New Jersey's residential and business communities with an advanced telecommunications infrastructure that is ready, willing and able to act as the onramp to the Information Super Highway.

"Our network investments are being driven by the exploding demand for a broadening array of services. These services range from additional lines, Internet access, and high-speed transport to applications requiring packet-switched networks, combinations of switched and private networks, and customized network designs."

And notice that the network are 'combinations' of 'switched', (regular phone-based networks), and 'private networks' as well as Internet, and high-speed applications, and customized network designs, and these last items are the basis of 'special access' services.

And this story is current, not simply history. First, the New Jersey Board of Public Utilities (NJBPU) never lowered rates or gave refunds for the failure to properly do the upgrades, nor audited the financial accounting books over the last two decades. The State, therefore, never stopped the other lines of business from directly benefiting from the rate increases and local phone customer funding.

And, last I heard, in April 2014, Verizon NJ got the State to create a 'stipulation agreement' to erase the obligations and in May 2014, the NJ Division of Rate Counsel took a legal action to block the agreement.

But, and in fact, the fiber optic wires for FiOS are part of the state telecommunications networks as told by Verizon's own cable franchise agreement - those lines were never counted by Georgetown in this accounting of line losses.

In closing this article, I found the following, proving that the manipulation of the access line accounting has been long standing and is everywhere. AT&T's March 16th, 2016 policy blog post is titled "CLECs End Game is Ethernet Reregulation". It states:

"There's no question that copper-based TDM services are in rapid decline. AT&T's access lines (copper last mile connections) are no exception - they have declined by almost 65% (more than 30 million lines, if you can believe it) since 2009.

"Yet, despite all the evidence pointing to the end of the copper era, the competitive local exchange carriers (CLECs) seem hell bent on championing the imposition of greater regulation on quickly disappearing copper-based TDM special access services."

The title is, of course, related to the Georgetown report. (However, though this AT&T policy post uses the same "65%" number, it claims that this represents AT&T's actual decline of access lines since 2009; the Georgetown academic report was for the entire US and started in 1999, a decade earlier.)

AT&T also doesn't mention that the FCC's recent data showed a doubling of the 'copper-based' TDM special access services (of which Ethernet is usually included).

Checking the AT&T Annual Report for 2015, a number of things pop out. The annual report supplies no lines for CLEC special access lines - Zero.

And while the quote makes AT&T's plight sounds dire, in 2015, AT&T's "Legacy voice and data service" revenues for business and residential services was still about $24 billion.

And to call this the end of the copper era is so disingenuous that one has to cringe. There are a host of other areas of revenue listed in the AT&T annual report, which include U-Verse, AT&T's video, broadband and IP phone service, and they are all based on using these 'legacy' copper wires. (i.e., U-Verse uses the legacy copper wire to the home, which was never replaced, and connects them to a large neighborhood box, which is then attached to a fiber optic wire.) The loss of lines, then, is just part of a 'reclassification' of the exact same wires put into another category where there is no accounting of 'copper lines' in service. - And since AT&T controls 21 states' telecommunications infrastructure, this stuff matters.

Next up, we have decided that what is needed is a bit of a "Primer 101" on the networks - as virtually no one has a clue that special access - 'non-switched', or phone service, 'switched-access' - all use the exact same identical wires - but somehow the accounting has been able to be suspended to hide the majority of lines in service.