A great comic strip like Lincoln Peirce's Big Nate is honest-to-goodness magic, isn't it? How else do you explain the visceral pleasure that a few properly-placed squiggles can elicit? The simplicity of a mouth drawn wide open in joy, or the movement captured in the nonsensical rise of a nonsensically-drawn leg? The thick, carefully-crafted onomatopoetic letters indicating uproarious laughter? 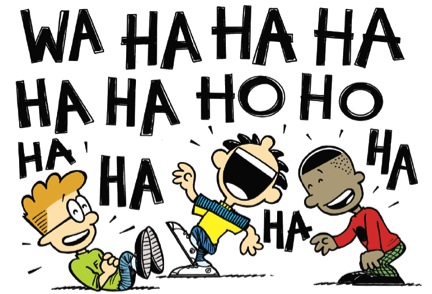 When Michael J. Bobbitt of Adventure Theatre MTC asked me and my composer/lyricist partner Christopher Youstra to adapt Big Nate as a kids' musical, I was thrilled and a little cowed by the challenge. I've adapted classic plays (Adding Machine: A Musical), novels (War With the Newts) and trial transcripts (Bert Brecht Before HUAC), but a comic strip? How do you create 3-D movement from a 2-D world? The essential experience of a great comic strip happens when the reader creates sound and movement and voice within his or her imagination. In theater, the audience's imaginative act comes after the sound and movement and voice have already been crafted -- the actor, not the drawing, is the vessel for empathy.

Is it possible to mash them together so the whole is greater than the sum of its parts? That's what Chris and I have tried to do with Big Nate: The Musical, running May 3 to June 2 at Adventure Theatre MTC.

Our task was made easier by a perfect, perfectly-flawed central character. Everyone on the planet with a teeny dose of humility can relate to Nate Wright, the chronic sixth-grade screw-up with more detentions to his name than equations in his head. Despite his best efforts to succeed, he fails, repeatedly and ever-more surprisingly. Yet his triumphs unwittingly arrive, often as a result of his artistic talents.

You see, Nate is a great cartoonist 0- a genius of the form, he insists. And if his mundane life lacks finesse, his imagination is a place of great wit, intelligence, and uncommon (and unconscious) wisdom.

Our adaptation celebrates Nate's artistic expression, while letting the audience know he's a kid like them: struggling to do well while the elements at P.S. 38 rage against him. And we try to find the theatrical equivalents of cartoon conventions: onomatopoetic dialogue (a whole teachers' lounge scene filled with "blah blah blah," "yak yak yak" and the occasional "ooga booga"); projected cartoon bubbles and drawings halt the action, mimicking the frame-by-frame movement of a comic strip; musical riffs become the equivalent of those frozen moments of surprise, shock and joy that a great drawing can nail in an instant.

And above all, what wins the day is creative expression. Nate isn't so good with words (his final approach to Jenny, the girl he hopes to win, goes something like, "Jenny, I wanted to say that... blork!"). But when it comes to his artistry -- as a cartoonist, and in this play, as lead singer and drummer for his garage band, "Enslave the Mollusk" -- Nate is extremely eloquent. As eloquent, we hope, as our translation of Lincoln Peirce's 2-D world to the stage.