Scroll down to see the proposed safety regulations and BP's objection

As families mourn the 11 workers thrown overboard in the worst oil rig disaster in decades and as the resulting spill continues to spread through the Gulf of Mexico, new questions are being raised about the training of the drill operators and about the oil company's commitment to safety.

Deepwater Horizon, the giant technically-advanced rig which exploded on April 20 and sank two days later, is leaking an estimated 42,000 gallons per day through a pipe about 5,000 feet below the surface. The spill has spread across 1,800 square miles -- an area larger than Rhode Island -- according to satellite images, oozing its way toward the Louisiana coast and posing a threat to wildlife, including a sperm whale spotted in the oil sheen.

The massive $600 million rig, which holds the record for boring the deepest oil and gas well in the world -- at 35,050 feet - had passed three recent federal inspections, the most recent on April 1, since it moved to its current location in January. The cause of the explosion has not been determined.

Yet relatives of workers who are presumed dead claim that the oil behemoth BP and rig owner TransOcean violated "numerous statutes and regulations" issued by the Occupational Safety and Health Administration and the U.S. Coast Guard, according to a lawsuit filed by Natalie Roshto, whose husband Shane, a deck floor hand, was thrown overboard by the force of the explosion and whose body has not yet been located.

Both companies failed to provide a competent crew, failed to properly supervise its employees and failed to provide Rushto with a safe place to work, according to the complaint filed in U.S. District Court for the Eastern District of Louisiana. The lawsuit also names oil-services giant Halliburton as a defendant, claiming that the company "prior to the explosion, was engaged in cementing operations of the well and well cap and, upon information and belief, improperly and negligently performed these duties, which was a cause of the explosion."

BP and TransOcean have also aggressively opposed new safety regulations proposed last year by a federal agency that oversees offshore drilling -- which were prompted by a study that found many accidents in the industry.

There were 41 deaths and 302 injuries out of 1,443 incidents from 2001 to 2007, according to the study conducted by the Minerals and Management Service of the Interior Department. In addition, the agency issued 150 reports over incidents of non-compliant production and drilling operations and determined there was "no discernible improvement by industry over the past 7 years."

As a result, the agency proposed taking a more proactive stance by requiring operators to have their safety program audited at least once every three years -- previously, the industry's self-managed safety program was voluntary for operators. The agency estimated that the proposed rule, which has yet to take effect, would cost operators about $4.59 million in startup costs and $8 million in annual recurring costs.

The industry has launched a coordinated campaign to attack those regulations, with over 100 letters objecting to the regulations -- in a September 14, 2009 letter to MMS, BP vice president for Gulf of Mexico production, Richard Morrison, wrote that "we are not supportive of the extensive, prescriptive regulations as proposed in this rule," arguing that the voluntary programs "have been and continue to be very successful," along with a list of very specific objections to the wording of the proposed regulations.

The next day, the American Petroleum Institute and the Offshore Operators Committee, in a joint letter to MMS, emphasized their preference for voluntary programs with "enough flexibility to suit the corporate culture of each company." Both trade groups also claimed that the industry's safety and environmental record has improved, citing MMS data to show that the number of lost workdays fell "from a 3.39 rate in 1996 to 0.64 in 2008, a reduction of over 80%."

The Offshore Operators Committee also submitted to MMS a September 2, 2009 PowerPoint presentation asking in bold letters, "What Do HURRICANES and New Rules Have in Common?" against a backdrop of hurricane activity in the Gulf of Mexico. On the next page, the answer appears: "Both are disruptive to Operations And are costly to Recover From". 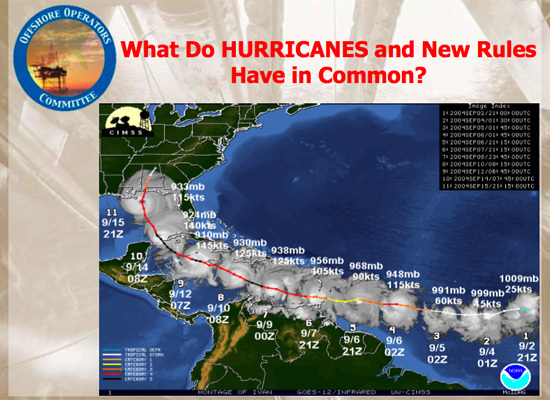 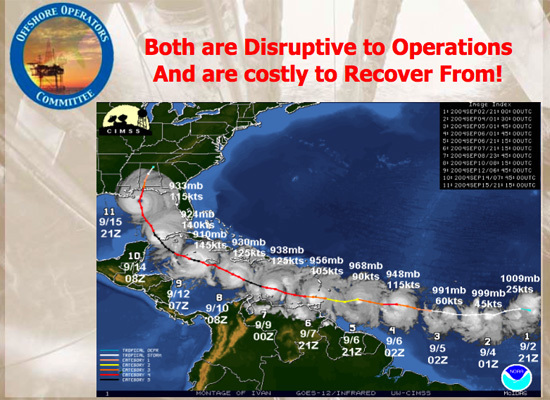 • MMS fails to understand that as operators, we can place expectations on contractors, but we cannot do the planning for them
• MMS adds a lot of prescriptive record keeping and documentation that does
nothing to keep people safe"

In addition, TransOcean accountant George Frazer, without identifying his affiliation with the company, submitted a public comment on the proposed regulations stating, "I strongly disagree that a mandated program as proposed is needed," arguing that the proposed action "is a major paperwork-intensive, rulemaking that will significantly impact our business, both operationally and financially," calling it an "unnecessary burden."

"It does appear to be have been an orchestrated effort among most of major oil companies and drilling operators," says Defenders of Wildlife senior policy adviser Richard Charter.

"This event has called attention to fact that there is a long-standing safety problem in offshore industry," he says, noting that he gets phone calls from whistleblowers working on rigs who complain about the work conditions and the environmental damage caused by such operations."

Brian Beckom, a personal-injury attorney who has sued TransOcean several times on behalf of workers, says that "the industry preaches safety, that's what comes out of their corporate mouths, but I know for a fact that is not always the way things go," though he concedes that the company is better than most in the industry, especially some of the smaller "fly-by-night operators". With newer expensive rigs -- BP was paying $500,000 a day to use Deepwater Horizon -- Beckom says "there is tremendous pressure to put production first" and safety issues fall by the wayside.

Industry officials seem to be aware of safety concerns -- in the minutes of a July 2009 meeting of the Health Safety Environment Committee of the International Association of Drilling Contractors trade group, one section is titled, "Stuck on the Plateau." At the meeting, members discussed the difficulty of lowering the number of safety incidents, how to "rock over from the incident plateau" especially in light of a shrinking workforce.

In the current case, the spill's damage has been exacerbated by the depth of the drilling, causing the oil to spread across a wider area and impeding clean-up efforts. On Monday morning, response teams failed to seal off the wellhead with a remote vehicle about a mile under the surface of the water -- an effort akin to "putting a lid on a peanut jar from thousands of feet away," explains Charter.

That threatens to make the spill the most damaging since the Exxon Valdez accident off the coast of Alaska in 1989. It is already the worst oil rig disaster since a blowout on the Union Oil platform off the coast of California in 1969 -- the public outrage over that 11-day oil spill helped spawn the modern environmental movement.

BP and TransOcean did not return calls for comment. Halliburton could not be reached for comment on Monday night.

Click here for the proposed rule from the Interior Department's MMS