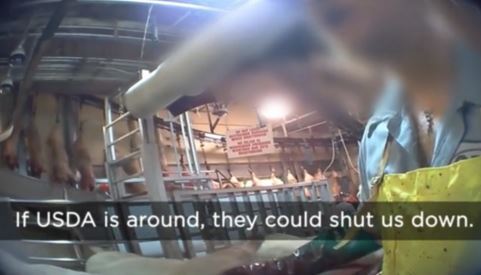 Before reading this, you might want to think twice about biting into that bacon.

Just a few months ago, the story broke about a shocking undercover video filmed inside a Minnesota pig slaughterhouse. It generated national and international headlines as the scenes depicted in the video seemed more appropriate for Upton Sinclair's The Jungle than a 2015 investigative exposé.

But this wasn't just any pig slaughterhouse. It was an exclusive supplier of Hormel, best known as the makers of SPAM. It's also one of the nation's largest — and fastest — slaughter plants. For more than 15 years, it's been operating under a limited USDA pilot program that's never been fully evaluated, though it has been widely criticized.

Despite expectations that the USDA would announce its review of this pilot program in January 2016 — with the anticipation it would get a thumbs up to expand to other US pig slaughterhouses — this topic seems to again be missing from the federal regulatory agenda.

The program is called HIMP: "Hazard Analysis and Critical Control Point (HACCP) Based Inspection Models Project." In a nutshell, it reduces the number of government-trained inspectors at slaughter plants by allowing facility employees to oversee many of their own food safety control measures, and it also allows slaughter lines to run at even higher speeds than other plants.

At this Hormel slaughter plant—considered an industry model for the expansion of HIMP—animals were pulled, prodded, and beaten, while those covered with feces or pus-filled wounds were processed for human consumption. By nearly all accounts, including the undercover video, whistleblowers within USDA, federal food safety records, labor unions, and a 2013 report by the USDA's Office of the Inspector General, HIMP is a dangerous program putting consumers, workers, and animals at unnecessary risk.

These red flags are all highlighted in a Jan. 19 letter to the USDA from 60 Members of Congress seeking to halt HIMP from being implemented nationwide.

Why is everyone (except the USDA) sounding the alarm?

For starters, the excessive slaughter line speed forces workers to take unsafe and inhumane shortcuts that can lead to injuries as well as extreme suffering for pigs.

The USDA whistleblowers are also sounding the alarm about the reduction in government-trained inspectors: "Not only are plant supervisors not trained, the employees taking over USDA's inspection duties have no idea what they are doing."

By allowing facilities to operate at increased slaughter speeds combined with reduced oversight, the USDA 's HIMP program is essentially giving the pork industry a free pass to police itself — and the plant managers are taking full advantage.

The whistleblower at the Hormel-supplier not only documented a supervisor sleeping on the job when he should have been ensuring pigs were being properly stunned, he also recorded another employee commenting "...if the USDA is around, they could shut us down."

And that's exactly the point: under HIMP, the USDA isn't around as much. So what the USDA doesn't see, the USDA doesn't enforce. Pretty convenient for the pork industry and for the USDA, but bad news for animals and consumers.

In fact, after dragging its feet for months on this case, the USDA just admitted that "The actions depicted in the video occurred at times when USDA inspection personnel were not performing verifications", and that "[h]ad these actions been observed by FSIS inspectors, they would have resulted in immediate regulatory action against the plant."

But, the USDA has still declined to take any meaningful action against this plant, which proves: USDA is happy to hand over much of its verification authority, then turn a blind eye to the abuse that inevitably continues when they're not watching.

This gross lack of authoritative action certainly makes many wonder whether the USDA has any interest in regulating the pork industry at all.

And now the USDA's long-awaited and much-anticipated decision on ending or expanding HIMP is being dodged yet again, to the benefit of the five HIMP slaughter plants quietly allowed to continue running faster line speeds than non-HIMP plants.

So whose side is the agency on? For the sake of consumers, workers, and animals, the USDA should do the right thing by putting an immediate end to this dangerous reduced-inspection, high-speed slaughter program. But by keeping HIMP, a 15+-year-old "pilot" program, intact with the possibility of expansion, the agency is clearly showing signs that perhaps it's already caved to pork industry interests.

Executive Director of Compassion Over Killing