Missoula, Montana -- It's a rare independent film -- any film -- that lights one's fire for action. Films entertain, nudge our thoughts, slam our feelings, outrage us, yet films rarely stampede us into doing something. Be warned, Gasland is a rare film.

Stripped to its essence, this extraordinary documentary tells the old story about the abuse of power... the powerful screwing the non-powerful ... the rich buying favor that costs the poor dearly.... An old story told in an infinite variety of ways, but always with the same old greed.

The drilling for natural gas in America -- mostly in the West and the South, although now exploding in much of the country -- uses a technique called "fracking." Invented by Haliburton -- remember that gang? -- fracking pumps huge amounts of water saturated with more than 500 chemicals into the ground to release the natural gas. Gasland addresses is fracking safe? You want to guess? 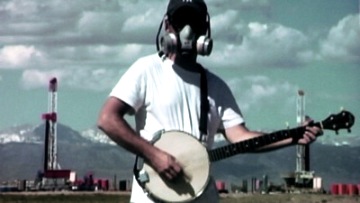 Back to Haliburton, to a former president of Haliburton, Dick Cheney. As Vice-President, Tricky Dick II (the original was Tricky Dick Nixon) spearheaded through Congress an exemption to the clean air and safe drinking laws when drilling for natural gas. You know, because of the energy crisis and national security and Haliburton's need to rake in an obscene amount of money -- the same patriotic Haliburton that moved it's headquarters out of the United States to the Middle East. For the same reason, to rake in even more money.

With our environmental laws bagged by Cheney, the Environmental Protection Agency has been unable to investigate and the American public is mostly clueless about all those chemicals being pumped into the ground near their drinking wells and in the air they are breathing. What chemicals? How many? What chemical cocktails? What are the effects? Don't look to the EPA , no potential law is being broken because there is no law to break.

Enter Josh Fox, an easy-going man with probably too much time on his hands and too many questions in his head. Living in the Pocono Mountains of Pennsylvanian, Fox was initially overjoyed with the prospect of selling his property's drilling rights to a natural gas company and earning himself a cool $100,000. But the Fox soon turned suspicious. It's his nature. So he jumps into his car and with a third-rate video camera takes off on a 24-state journey to uncover the truth about our natural gas drilling boom. You see, Tricky Dick II was not able to outlaw the Fox.

Gasland -- at the Sundance Film Festival it won "The Special Jury Price for Documentary" -- takes us into the homes and backyards of those whose well water and creeks and lakes and air are being affected by the nasty onslaught of deadly chemicals from natural gas drilling. We see water that can be lit on fire right out of the faucet. We hear from chronically ill residents, all with the same mysterious symptoms, that live next to drilling areas in disparate locations. We feast our eyes on a slew of huge pools of toxic wastes and dead animals -- it's an ugly, deadly mess.

"If men were angles," Thomas Jefferson wrote, "no government would be necessary." We know people are not angels, and people in corporations are even less angelic -- sometimes downright evil! Yet, we don't have a government that enforces our environmental laws. Actually, we don't even have some of the laws since Cheney and Congress did their vile two-step.

On his journey, Josh Fox interviews regular Americans from cowboys to a mayor of a small town in Texas to working class men and women. His relaxed, even humorous style is a perfect balance to the ghastly damage being done to the environment and people. Although not the best shot film -- the man really needs a better camera -- Gasland just might be the best film of the year. And it just might take you from outrage right into the fire of action.

See the film! Then get to work!

Note: It was just announced here at the Big Sky Documentary Film Festival that Gasland has won "The Artistic Vision for Best Feature."