Back in 2010 I called two friends from my hometown of Overland Park, Kansas with an idea for a charity poker tournament. The friends were Paul Rudd and Jason Sudeikis, and the goal was to have fun with our family and friends while raising $50K or so for Children's Mercy Hospital. It took nine weeks to plan. I named the event Big Slick, and celebrated as year one exceeded expectations both in regard to total money raised and the generosity of all those involved -- including friends like Will Ferrell, Adam McKay, George Wendt and Will Forte who flew in for the cause.

This weekend marks the 6th annual Big Slick Celebrity Weekend fundraiser. It's also Father's Day. And while the holiday overlap wasn't intentional, it beautifully highlights everything Big Slick has grown to be about over the past five years. The event has increased in size, awareness, donations and celebrity attendance, but it still remains all about family: those families impacted by childhood illness and seeking care from the incredible doctors and team at Children's Mercy; as well as my own family -- and those of fellow co-hosts Paul Rudd, Jason Sudeikis, David Koechner and Eric Stonestreet -- who volunteer countless hours to make Big Slick and the more than $2.2MM it's raised (a record $1MM in 2014) possible.

Throughout the months leading up to Big Slick, it really is a familial effort that makes it all happen. My sister Julie and brother-in-law Mark are on the organization board along with Paul's mother and sister, Jason's mom, David's sister, Eric's sister... not to mention volunteer committees full of countless childhood and college friends. It's an annual family reunion of sorts that keeps us connected to our roots, introduces new friends to a city that we love, rallies the entire region around charity and continually humbles and inspires us -- all while having fun.

The fun of Big Slick weekend includes a variety of fundraising events ranging from celebrity vs. celebrity softball on the field at Royals' Kaufman Stadium to song and dance numbers and high-ticket auction items. However, the best part of the weekend is always away from the crowds. It's the hours spent in the halls at Children's Mercy. Those moments in the hospital are also what brings us, all the volunteers and our celebrity friends -- most of whom have no personal connection to Kansas City or the Midwest -- back to support Big Slick year after year. Once you meet the children and their parents, hear their stories, meet the nurses and staff... there's no denying that it's worth taking the weekend to help these individuals -- even if it means being away from your own kids on Father's Day in order to support these fathers.

There's an incredible documentary called Inside Pediatrics that was filmed at Children's Mercy last year, narrated by Paul Rudd and including a glimpse of Big Slick weekend. Whether you're familiar with the Kansas City area or not, it's a moving look at the current work being done in child medicine and the challenges faced by our neighbors impacted by illness. It's what inspires me. This Father's Day or any day -- whether in your hometown or current town -- I encourage you to find what inspires you to act. Making a difference could start with something as simple as an idea and phone call. To learn more about Big Slick, visit BigSlickKC.org or Crowdrise.com/BigSlick. 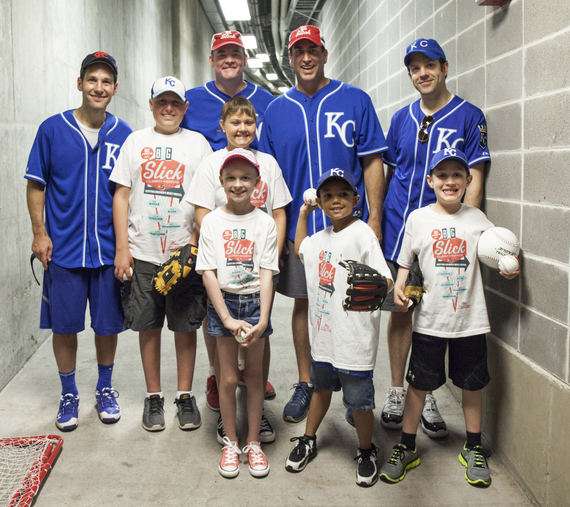