Exxon has been in the news lately. Exxon's Own Research Confirmed Fossil Fuels' Role in Global Warming Decades Ago and Exxon Sowed Doubt About Climate Science for Decades by Stressing Uncertainty, inspired articles like Is the fossil fuel industry, like the tobacco industry, guilty of racketeering?

Some corporations privatize profits by socializing large costs or risks, but if often takes years to understand the latter. When science goes against them, companies can choose to change, but to fend off unwanted actions, they can employ a collection of think tanks, front groups, lobbyists and politicians one might call the "machinery of doubt." 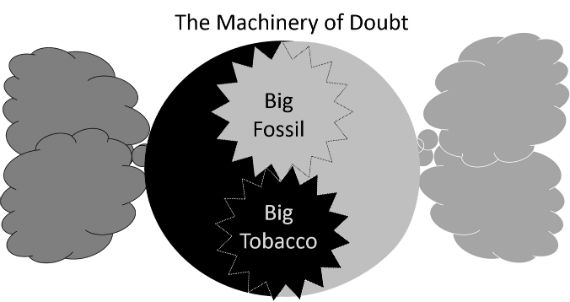 Fossil-tobacco comparisons extend well beyond Exxon to others, especially the Koch brothers and Big Coal, who all employ the machinery side-by-side, but sometimes relationships are more direct.

As surfaced in Merchants of Doubt, Big Tobacco and Big Fossil share similarities, and sometimes use the same people, such as famed climate science denier Fred Singer's attack on the EPA regarding secondhand smoke. Of course, fossil energy is actually useful, even as the downsides are increasingly understood, but documentation of tobacco tactics can help understand likely fossil industry actions.

"If any one of us believed that the product we were making and selling was in any way harmful to our customer's health -- and our own as well -- we would voluntarily go out of business."

Sixty years on, Altria plus Philip Morris International revenue is over $100 Billion/year. For most people, nicotine is able to "rewire" brain receptors and create customers only during adolescent brain development, roughly ages 10-24. Later, half the regular users die of it. That business needs great marketing skill, perhaps why Koch Industries has hired tobacco operatives. Doubt works.

Robert Proctor's Golden Holocaust: Origins of the Cigarette Catastrophe and the Case for Abolitionis a detailed history of corporate skullduggery, whose pages 290-291 offer a tobacco playbook that needs little editing for fossil use.

Following are just a few examples from the history of actions and relationships.

About 1989, the Western Fuels Association and other coal interests started funding Pat Michaels and Robert Balling Jr. In 1992, it produced a widely distributed video, The Greening of Planet Earth, well-liked in the Bush White House. Featuring Sherwood Idso and Richard Lindzen, it pioneered well-debunked myths cataloged at Skeptical Science, such as "#120 CO2 is plant food," "#5 "Models are unreliable" and "#56 Medieval Warm Period was warmer."

In 1993, The Association for Sound Science Coalition started as a Philip Morris anti-science front, but got money from Lorillard, Amoco, Chevron and Exxon, among others. Famed climate denier S. Fred Singer wrote a report criticizing the EPA's work on secondhand smoke.

Oil & Gas has been the largest contributor to Joe Barton (R-TX). In 2005-2006, he attacked the climate "hockey stick" and the scientists who created it, but a decade earlier, he harassed tobacco regulators and health scientists, starting 04:30 in Links Between Big Tobacco and Climate Denial -- "Rhymes with Smoky Joe."

While Big Fossil and Big Tobacco have long spent money on lobbyists and political donations, likely their greatest joint achievement was that described here in Study Confirms Tea Party Was Created by Big Tobacco and Billionaire Koch Brothers, based on the peer-reviewed paper "To quarterback behind the scenes, third-party efforts: the tobacco industry and the Tea Party."

Over decades, Big Tobacco evolved away from official industry groups to using front groups and "independent" think tanks to promote their messages. Starting in the 1990s, Big Fossil followed the same path, often with the same groups.

The U.S. Chamber of Commerce helps fossil interests fight the EPA, but by 1997-1998 was sold to Big Tobacco.

It can be easy to stall action in the U.S. Congress, but sometimes the Executive Branch, Courts or individual states move faster. Congress did little about tobacco, but the EPA was made progress on secondhand smoke. State Attorneys General pursued tobacco cases, and finally started to win some. Eventually, courageous Department of Justice lawyers won a difficult RICO case against Big Tobacco, described in Bad Acts: The Racketeering Case Against the Tobacco Industry.

Will anything similar happen to Big Fossil? Compared to the public database of internal tobacco company documents, that for fossil companies is tiny, but sometimes facts pop out from events like coal bankruptcies: Climate Denier Response to WSJ Story Revealing Coal Payments: (1) Dog Ate Homework, (2) I'm A Lawyer.

Although it is very early and legal cases are neither easy to start nor quick to resolve, the same kind of process that finally led to legal wins against Big Tobacco seems to be starting, as seen in Exxon Mobil Investigated for Possible Climate Change Lies by New York Attorney General.

This post is part of a "Corporate Skullduggery" series produced by The Huffington Post, in conjunction with the U.N.'s 21st Conference of the Parties (COP21) in Paris (Nov. 30-Dec. 11), aka the climate-change conference. The series will put a spotlight on businesses that have actively tried to mislead the public about the dangers of climate change or about their own contributions to rising temperatures. To view the entire series, visit here.