I watched one of the two Best Worst Movies in film history this weekend - Big Trouble in Little China (the other Best Worst Movie is Army of Darkness). Whether brought on by the natural high of a leftover-filled stomach, or the artificial high of Thanksgiving night Maker's Mark, I had an epiphany that this movie is a highly accurate -- if artistically absurd -- portrayal of a deeply important aspect of how America sees itself in the world. 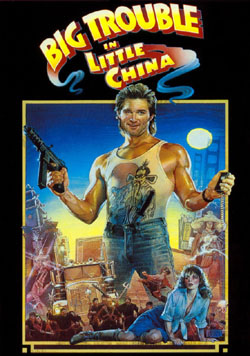 The main character, Jack Burton (Kurt Russell), is obviously cast as America. Indeed, director John Carpenter pretty overtly wants him to be something of a Western cowboy (for instance, though a truck driver, Burton carries his belongings in a saddle bag). As the Toronto Star praised Russell in its review, "He does a great John Wayne imitation." Meanwhile, David Lo Pan and his gang are the Rest of the World, and more specifically, the Non-Aligned Countries, otherwise known as the Axis of Evil.

The plot casts these Foreigners as having created a terrorist cell in San Francisco's Chinatown. In fact, every Chinese person in the movie -- good guy or bad guy -- is made to seem like their first and foremost loyalty is not to the United States, but to China ("China is here, Mr Burton!") -- a key fear propagated by American pop culture, from the McCarthy witchhunts for communist infiltrators to George W. Bush's domestic "war on terror." And Burton's reaction to their idiosyncrasies and local cultures is the stunned/disgusted "no, god, please what is that?"

So how does Burton/America deal with Lo Pan/Foreign Terrorists? He has no plan at all, other than to head to their headquarters and bust in guns blazing. The lack of planning is not an accident or something looked down on -- it's how he rolls and he's proud of it, as evidenced by his repeated refrain that he doesn't need to plan because "it's all in the reflexes." And every time he says this line, we're supposed to laugh and cheer with him, because this is how we roll.

We don't plan when dealing with foreigners who have different customs and cultures and who threaten our interests -- we don't need to plan because planning is for pussies. We're fellow truck-driver cowboys with daggers in pocket of the boots we're wearing over our acid wash jeans -- and dammit, "it's all in the reflexes."

While Burton stumbles a lot and makes an idiot out of himself, his lack of planning ultimately works. He defeats the evil foreigners, saves the day and gets the girl (who he's too cool to keep around). The moral of the story is that while America might make some blockheaded mistakes, they're honest ones and because we're the "good guys," we'll end up winning the day. There may be "big trouble" but it's manageable because compared to American power, everything is little (in the movie's case what's little is China, but it could be anything -- Iraq, Al Qaeda, etc.).

Big Trouble in Little China debuted in 1986 -- arguably the peak of American world supremacy. The Soviet Union was on its heels about to collapse and there were no other superpowers, or emerging superpowers. So, in that sense, the movie was a vaguely accurate metaphorical depiction of the United States at the moment. We could kick some ass without really having to think about it.

That said, the tongue-in-cheek flavor of the film suggests Carpenter is using the Burton character to deliberately ridicule American hubris (and let's not forget the very end of the movie just before the credits roll: the crazy-eyed demon about to get his final revenge on Burton could be the world taking revenge on that hubris). So, in that sense, the movie was actually a prescient warning -- one that's more relevant today than when it first came out. China and India are both on the ascent economically and militarily, and the global power game has gone stateless and transnational. So while we still like to see ourselves as the chest-puffed swashbuckling Jack Burton from the film's poster, that's just not what we are -- or can be -- anymore. Our Jack Burton-ism is no longer the rip-roaring hee-hawin' adventures through the Grenadas and Panamas of the world -- we're knee-deep in battles with much bigger and better-prepared enemies.

And so the the question is whether we -- and by extension, our our pop culture -- can acknowledge that reality?

It seems to me we refused to accept that when we re-elected George W. Bush in 2004 -- a President Jack Burton if there ever was one. But it also seems to me that perhaps we are beginning the process of accepting reality when we elected Barack Obama, largely because Obama articulated a vision of America being far more humble and controlled on the world stage.

Sure, reflexes (i.e. how we react in a short-term crisis) are still going to be important. But with our global challenges becoming far more long-term and structural in nature, it's not going to be "all in the reflexes" nor can we afford to just waltz into delicate situations against well-prepared enemies without any other plan than kickin' some ass.

Because of population growth trends, an Asian industrial revolution, and the decline of our empire-level power, the featured film of the day will increasingly be Big Trouble in Little America. We're up to dealing with that trouble, but only if we retire Jack Burton to the Pork Chop Express for good.

Gift Shop Addendum: As something of a gift-shop addendum to this post, I wanted to note that you can go pick up all the Big Trouble in Little China paraphernalia that you may want from the Wing Kong Exchange, a website named after the major venue in the movie.