Small theater is one of the most welcoming places for fresh new voices. In this series I will begin to prove why.

Introducing One of Miami's greatest gems that currently lives in NYC. France-Luce Benson is a brilliant writer and actor I met in 5th grade at R.R. Moten. We began studying acting there with Mrs. Sendler and went on to study with Mr. Rick Adams in middle school. We are both graduates of Miami's New World High School of the Performing Arts, where I was lucky enough to performed in one of her first plays.

France-Luce is quickly becoming one of the most sought after authenitc voices of our generation.

Why do you live in New York as opposed to any other city?

I'm addicted. NY does that to you. I moved here over a decade because I thought it was the only place to be if I wanted to pursue a career in theatre. I don't believe that anymore, but living here is totally addicting. It's exausting and sometimes crazy making to live here, but as soon as you leave you miss it. Everything about it. The energy, the people, the parks, the subway, the skyline. It's a theatre mecca and arts and culture permeate the city; it's everywhere. Everyone from UES socialites to the guy at my Brooklyn deli has gone, or goes to the theatre, visits musuems, and in the summer there are free concerts and shakespeare in the park...the list goes on. And I love the people.

Who are you speaking for and or to in your work?

speaking for the under-represented, I'm particualrly inspired by my cultural background - but it's really about challenging stereotypes and erasing negative images that are based in systemic racism; women, quirky folks, outcasts, and ultimately myself, I suppose. I'm speaking to anyone interested in hearing what I have to say.

What play of yours do you feel was seen to its full potential and why?

The very first production of the the ten minute version of The Talk, produced at The Fire This Time Festival in 2012. Mainly because my director, Jamie Richards, was thorough, clean, and precise - and my cast Chantal Jean-Pierre (who reprised the role at Crossroads) and Jesmille Darbouze nailed it. I believe that the success of that collaboration is what led to Crossroads Theatre commissioning and producing an expanded version of the play, and now the upcoming production at Ensemble Studio Theatre. 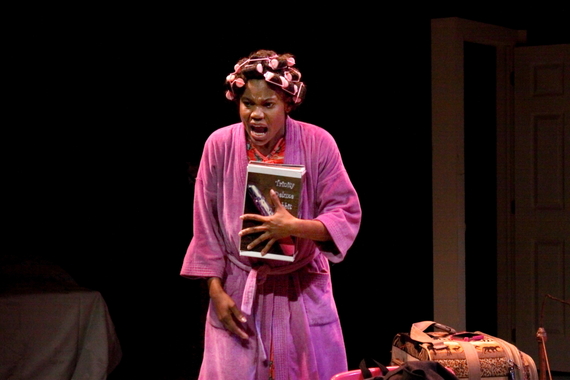 What does a good day in the life of France-Luce look like?

Sun, temps btwn 70-85, a few hours of writing, an hour of exercise(must break a sweat), good health, good food, some version of prayer and meditation, being in what I call "the room" (rehearsal room, writing room, a reading, a production meeting, a meeting with a creative collaborator - being "in it"), and a lot of laughter

I don't actually believe I "chose" theatre. It chose me. It found me, somehow, in spite of my circumstances. I fell in love and decades later I still feel compelled to create. And let's face it: Why would anyone "choose" this life? Endless rejection in a predominately white, male elitist industry; financial insecurity; and an array of wacky and complicated personalities(myself included). However, when you do get to do your work, it's a special kind of joy that is hard to explain. And yet, there is always the heartbreaking task of "letting go", because as the playwright - you are no longer in control. I chose this life the way many choose to have children. You know it's going to hurt like hell, and that after years of self sacrifice, they'll run as far as they can, blaming you for effing up their lives. But you do it anyway, because the need to create will not let you rest.

The question of worth is tricky. Do I think theatre is a worthy platform for my voice?

I suppose it depends.Some stories are better told in film, or over seasons of televison. While I've dabbled in film and t.v., my drug of choice is theatre. I think my plays are worthy of theatres with the resources to fully realize my vision with dignity and care. But, I mean, what playwright wants their work to be produced in a "small" theatre. I don't know any playwrights, personally, who would choose a "small" theatre; or who would even want to be known as a playwright for "small" theatre. But many of us do choose to develop our craft within our artistic community, and sometimes that means a workshop off-off Broadway, or a reading in an unconventional space. But I can't say I aspire to work in a "small" theatre, and I certainly feel that I'm worthy of working with companies and institutions to fully support my work on all levels. But like everything in life, we are worth what we believe we are worth. And our own sense of self worth, in many ways, dictates what we get. This is something I continue to work on. I do think theatre is a worthwhile art form, writing for the theatre is a worth while endeavor, and my stories are worth telling.