Sure, inviting everyone and their cousin to your Big Day might cost you a pretty penny, but it could pay off in the long run. A new study says that people who had bigger weddings reported better marriages down the line.

As part of The National Marriage Project, researchers from the University of Denver looked at relationship data collected from 2007 to 2008 on 1,000 unmarried Americans ages 18 to 34. Over the next five years, 418 of the participants tied the knot.

Researchers then took a closer look at those marriages to see which factors played a role in marital happiness.

Interestingly, the study found that couples who had an actual wedding, rather than an elopement, reported better marriages.

Specifically, 41 percent of participants who had a wedding ended up in the top 40 percent of what researchers deemed "high-quality" marriages, versus only 28 percent of those who did not (graph below). 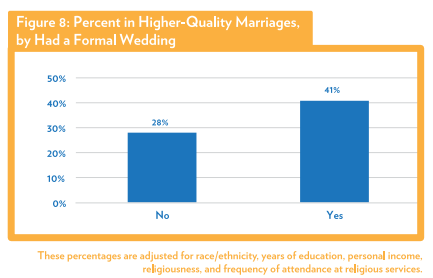 "We expected this association between wedding guests and marital quality to be mostly related to having more economic means," the researchers explained in the study, "but controlling for income and education (as well as race/ethnicity and religious differences, which we did not expect to be significant here) did not eliminate a strong association." 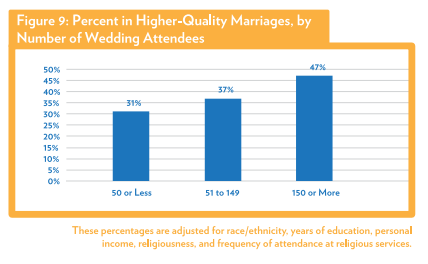 The findings beg the question: why would the number of wedding guests affect your future happiness? Researchers believe it might be because couples feel pressure to follow through on their vows.

"Commitment is strengthened when it is publicly declared because individuals strive to maintain consistency between what they say and what they do," the researchers write in the report.

Another possibility, says director of the National Marriage Project W. Bradford Wilcox, is that couples who have big weddings may also have more support to fall back on.

"Couples with larger networks of friends and family may have more help, and encouragement, in navigating the challenges of married life," says Wilcox. "Note, however, this finding is not about spending lots of money on a wedding party, it's about having a good number of friends and family in your corner.”